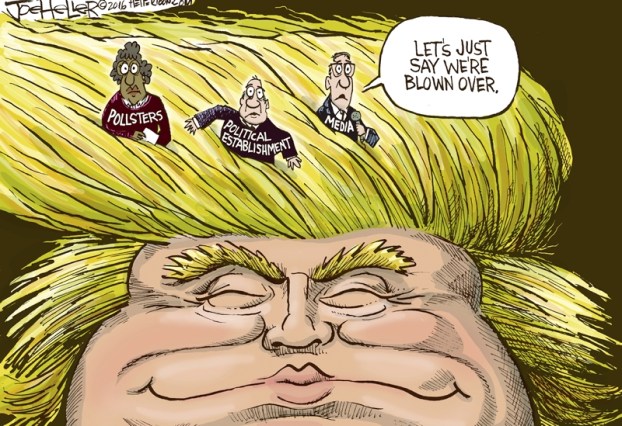 Secular progressive policies at home and abroad are not working. The establishment has had its chance — multiple chances, in fact — to fix things, but it has failed, or didn’t try, under Republican and Democratic administrations. Voters are taking a big chance with Trump, but things have gotten so bad that the election shows many millions of Americans are willing to try something new.

Trump achieved what most of the experts, the ruling class, the major media (including most pundits and once again the pollsters), Republican leaders and many others thought was impossible. He not only won back the Reagan Democrats, including nearly half of the union members who cast ballots, but he also had coattails, allowing Republicans to maintain control of both houses of Congress.

This was more than a change election. It was a revolution. Now, the question becomes: What will the Republicans do with it? If Trump is smart, he will call on the GOP congressional leadership to write the legislation that will achieve his objectives. These include the repeal and replacement of Obamacare, immigration reform and building the wall, school choice for the poor, rebuilding inner cities and infrastructure, and nominating conservative judges to the Supreme Court and lower courts.

The election vindicates the decision by Senate Majority Leader Mitch McConnell not to hold hearings on President Obama’s nominee to the Supreme Court, Merrick Garland, until the election results were known. Garland will never join the high court.

The courts may be saved from secular progressives for years to come and the Constitution respected again. That is victory by anyone’s definition.

An added bonus is that Trump can use executive orders to immediately reverse President Obama’s executive orders, which he used to bypass Congress. An even bigger bonus is that the Clintons have been swept out of politics. Foreign donors to the Clinton Foundation will likely close their checkbooks now that Hillary won’t be able to do anything for them.

The left will demand that Trump “reach out” and work with Democrats, but that is a trap. Recall what Democrats did when they won the White House, the Senate and House in 2008. They rammed through legislation that reflected their worldview. Trump should do the same, but without triumphalism. He must prove his policies work and can achieve the goals he has set: economic growth, more private-sector jobs, bringing corporations home from overseas with a lower corporate tax rate, and defeating the Islamic State. The only reason to have power is to use power. Democrats understand this. Too often timid Republicans don’t. They must now use it, or they will lose it.

Trump’s victory is part of a global movement to throw off incompetent leaders, reduce the size and cost of government, and restore countries to the values that have made them uniquely British, German, French and American. It also is a victory of a culture that eschews the coarseness and crudeness of the likes of Jay-Z and Beyonce and the Hollywood elites. Mogul Barry Diller says he will leave the country, for which many will be grateful, especially if he takes others who promised to leave if Trump won with him.

Now comes the hard part. Because Trump’s background is neither politics nor government, he must call on those with such experience to help him. Vice President-elect Mike Pence is the perfect starting point. Pence’s years in Congress and his executive experience as governor of Indiana make him the go-to guy for navigating the labyrinth that is Washington. He may turn out to be the most consequential vice president since Dick Cheney.

All the pieces are now in place to yank America back from the brink. This is an opportunity that comes along once in a century. Success will silence the critics, who won’t go quietly and accept defeat. If Trump succeeds in all he has promised, he will have saved the country from disaster. It will be said of him that he really did make America great again.

OK, we get it. You’re dissatisfied with candidates on the ballot. We’ve overheard enough cafe conversations in recent months to... read more