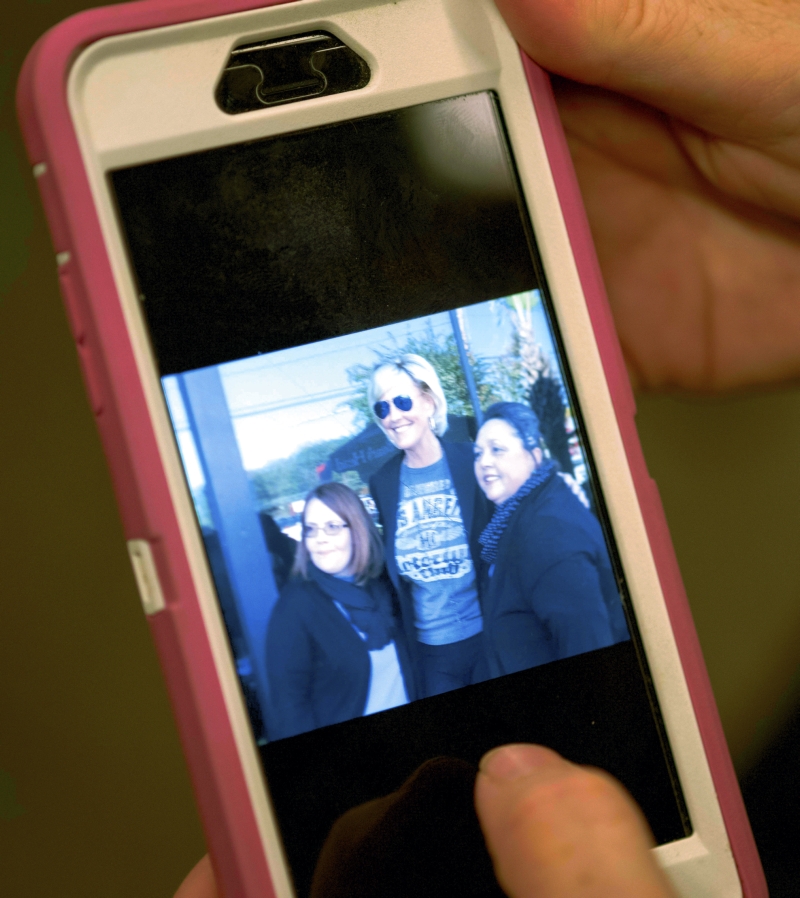 Amy Brown looks at a photo on her phone that was taken during a lunch with environmental activist Erin Brockovich. In the photo, Brown, left, and Deborah Graham, right, pose with Brockovich. Brockovich was at Catawba College’s Keppel Auditorium for a speaking event on the topic of community members helping to make a healthier planet. Jon C. Lakey/Salisbury Post

SALISBURY —  Deborah B. Graham and Amy Brown call themselves the Real, Live Housewives of Coal Ash.

They wore T-shirts that said so Monday when they had lunch at The Palms with Erin Brockovich — yes, the Erin Brockovich of movie and consumer advocacy fame. Brockovich, it’s safe to say, has become one of the women’s heroines.

Brockovich signed copies of her book, “Take It from Me: Life’s a Struggle But You Can Win” for the women. She also autographed DVD copies of the 2000 “Erin Brockovich” movie, the one starring Julia Roberts.

It was back in the spring of 2015, not long after their families received letters telling them not to drink their well water, that Graham and Brown first met each other. They became fast friends, even though Graham lived in the Dukeville community of Rowan County, and Brown lived in Belmont.

The state told families living near Duke Energy steam stations, such as Buck in Rowan County and Allen in Belmont, that the coal ash storage basins on those sites could be contaminating the groundwater.

By August of 2015, Brown and Graham were talking to Brockovich by telephone in a conference call.

“It means a lot that someone is willing to listen,” Brown said.

It so happened that one of the heavy metals of concern in the women’s well water was hexavalent chromium (chromium-6), the same contaminant that had poisoned the drinking water of Hinkley, Calif., and had led to more than 600 residents winning a $333 million lawsuit against Pacific Gas & Electric.

At a small news conference Monday afternoon, with Graham and Brown sitting in back, Brockovich said part of her message is that Superman is not coming, and she tries to help people be their own heroes.

If you wait for changes and solutions to trickle down from the top — from government and the for-profit companies they are trying to regulate — it’s not going to happen, Brockovich said.

Brockovich said people have to wake up, get involved in local politics and initiate the change in their own backyards. Local leaders have to listen and see what residents are exposed to and dealing with daily.

On the coal ash issue in North and South Carolina, Brockovich didn’t want to split hairs on the science. She said it’s common to see push-back from the scientific community and companies put on the defensive about chromium-6, but after 25 years, she thinks she is educated on it.

“This is a nasty compound,” she said.

You could ask her about it 100 ways — whether it’s naturally occurring some places and not in others, for example — but her answer will be the same, Brockovich said. Hexavalent  chromium is a poison and it shouldn’t be in our drinking water.

“They really need to hear the people’s side,” Brockovich said. “… We have to put health first (over profits), and we’ve done this bass ackwards.”

As part of a Catawba College Center for the Environment series, Brockovich spoke later Monday evening to a crowd of more than 1,000, and her message, “Community Power: How We Can All Make A Difference in Creating a Healthier Planet,” was similar.

Graham and Brown are trying to do their part. They have set up a “Duke Neighbors” Facebook page to keep people living near coal ash ponds updated. Brown says they also have chased Gov. Pat McCrory across the state trying to get answers.

The women found it ironic that they could have lunch and a visit with Erin Brockovich from California, but never have that chance with the governor. The whole experience with coal ash has shown the women “you can’t trust Raleigh to protect your health,” Brown said.

“I cannot trust them, and it’s sad,” Brown added. “You don’t know you need protection in this state until you have to fight for it.”

What Duke Energy has done in creating the coal ash storage basins at the steam stations is essentially dig a hole, dump in toxic waste and call it a day, Brown said.

For 18 months and two-and-a-half weeks — Brown keeps track — the families on notice near the coal ash ponds have been living with bottled water delivered to them every two weeks by Duke Energy.

The women pulled up photographs on their individual cellphones showing how their daily lives are encompassed by water bottles — water bottles to cook with on the kitchen counter, cases of bottles sitting in living room, or stacks in the carport.

Duke Energy’s formula has been to provide one gallon of water per person per day.

Graham said her children bought their father a hand truck for Father’s Day, so he could move the cases of water they rely on.

Graham and Brown said their kids shouldn’t have to live with knowing they can’t even brush their teeth with water from the spigot, or that any showers they take have to be done quickly.

Brown says there is a stigma passed on to her children when their friends fear that visiting their house could be dangerous because of tainted water. The Browns have an in-ground pool they no longer enjoy out of fear the water used to fill it was contaminated by the coal ash ponds.

The value on their homes has sunk, making them impossible to sell, the women said.

And people, having seen Brown on television fighting for answers, approach her in grocery stores or elsewhere and accuse her of being that woman who is going to raise their electric rates.

“We did not ask for this,” Brown said.

The women said something is not right when the state allows Duke Energy, which they described as being on environmental criminal probation, to have such a huge voice in how coal ash ponds will be mitigated.

Graham said she enjoys her air-conditioning, television, appliances, lights and heat — all made possible by Duke Energy — but she thinks Duke, the governor and state have stacked the table against the people wanting answers about coal ash and its effects.

Both women stressed, however, the communities living next to coal ash ponds are willing to work with Duke Energy.

“We don’t hate Duke Energy,” Graham said. “We just want them to do the right thing.”

As for Buck Steam Station, Duke has reached a settlement in a lawsuit brought by the Yadkin Riverkeeper and The Water Alliance. It calls for the excavation of the six million tons of coal ash from three different ponds.

That coal ash will be recycled on site into an ingredient for the making of concrete, or the coal ash not used will be put into a lined landfill away from the river. The excavation deadline is 2035.

But at the Allen Steam Station in Belmont, the plan is for the coal ash basins to be capped. Brown said with that approach “you’re only covering the top, but the problem lies underneath.”

For both the Graham and Brown families, the solution for their water issue is that they eventually will be served by municipal water lines. Before, they didn’t have to pay anything for water.

Brown said she will be paying double the normal city rates, because she lives outside the city limits. Again, she didn’t ask for this, but right now it’s her family’s only choice.

The women said they had an amazing day being around Brockovich.

In a personal inscription to Graham in her book, Brockovich wrote, “For Deborah — What can I say? You are such an inspiration! Who knew that Erin Brockovich had a clone … well, she does, & it’s you. Keep giving them hell! Rock on, Erin Brockovich.”

Now to go with all their pictures of bottled water, Graham and Brown also can show themselves posed with Brockovich.

It’s a ready reminder their fight is not over.