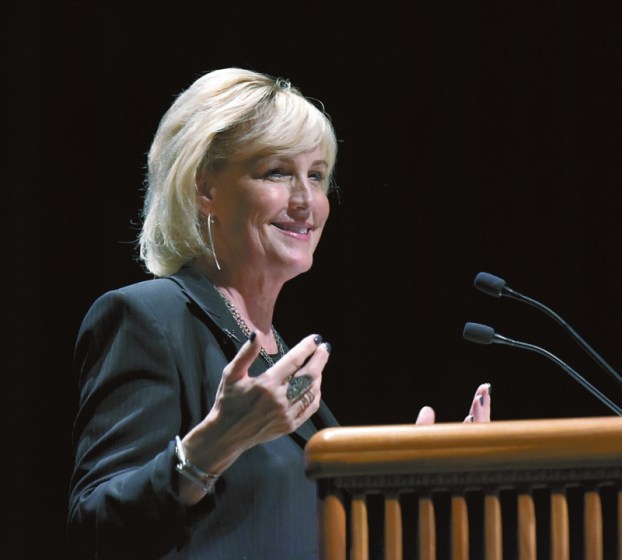 SALISBURY — Erin Brockovich believes the way we interact with the environment can change, but only if that change starts in our own backyards.

According to the Center for the Environment website, Brockovich is well known for her role in one of the largest direct action lawsuits in U.S. history. In 1992, she discovered documents that helped lead to more than 600 residents of Hinkley, Calif., filing a lawsuit against PG&E. The residents ended up receiving a $333 million settlement, the largest settlement of its kind in U.S. history.

Her life story and work on the case was turned into a movie in 2000 called “Erin Brockovich.” Actress Julia Roberts won an Academy Award for her portrayal of Brockovich in the movie.

Since then, Brockovich has continued her work in consumer advocacy and environmental activism. She is president of Brokovich Research & Consulting and has partnered with Google to put together a crowd-sourced map to track possible environmental hazards worldwide.

Dr. John Wear, executive director of the Center for the Environment, introduced Brokovich to the almost full house of attendees. He said they initially thought the event would be a more intimate setting with mostly faculty, students and some community members.

“… I very quickly realized, this is a woman that has impacted an enormous number of people,” he said.

Brockovich started by talking a little bit about the movie and how it has impacted her life. She said there are people who do not believe she is really Erin Brokovich because she does not look like Julia Roberts.

“You have no idea how much confusion this has caused so many people, even 16 years later,” she said.

She told the story of how the movie came to be. Brockovich was in an accident and went to a professional who performed chiropractic services, acupuncture and craniology to help her with headaches and other injuries. She would tell the professional stories about what she was finding out in Hinkley during her sessions. Little did she know that the professional was passing along her stories to a friend who was married to Danny DeVito, actor and co-founder of the production company Jersey Films.

Brockovich eventually met DeVito, and the movie was made.

Brockovich then moved on to talk about the importance of the environment and how individuals can work together to solve environmental issues.

“If you think about it, and I know often times we don’t, everything that makes us the global society that we are comes from the environment,” she said.

She said it was important to give back to the environment and help end the damage society has caused.

“… I have learned there can be no more blame,” she said, “because it is what it is. And I also learned, and there’s nothing more important, politics get in the way.”

Brockovich said the right to clean water is a human right, no matter party affiliation, background, race or wealth.

“It’s important that we change our perception and stop profits and greed (from being prioritized) over health and well-being,” she said to applause from the audience.

She urged the crowd to realize that if they wanted change, they would have to fight for it themselves and not wait for someone from the top to do it for them.

“I always hate to be the bearer of bad news. Superman’s not coming and sometimes I think we think he is,” she said.

Brockovich said it was important to gather information and research to improve the realms of science and technology.

She said when communities have the right information, they can start to make a change.

“I know it’s hard sometimes to wrap our minds around this,” she said, “but it is happening. But here’s what I do know: when you don’t know, you’re defenseless. When you do know, you’re empowered.”

Brockvich said while researching groundwater contamination at Hinkley, people tried to tell her that what she found did not matter because she wasn’t a doctor, scientist or lawyer.

She said she stuck to her gut at Hinkley despite what others said and individuals would have to trust their instincts, as well.

She ended her talk by encouraging the crowd to knock down obstacles, build bridges of trust, push for transparency and realize that it all starts with personal motivation and strength.

At the end of the day, Brockovich said, those who fight need to remember why they fight in the first place — to make a better world for their loved ones.