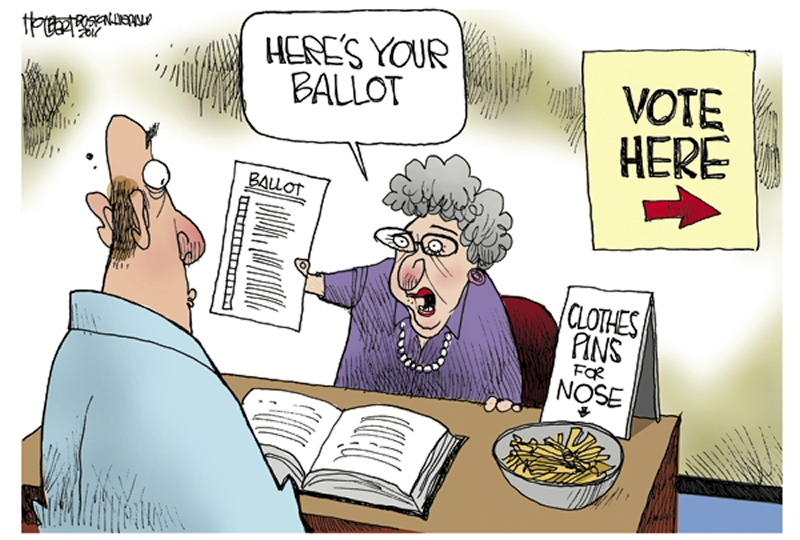 You’re dissatisfied with candidates on the ballot. We’ve overheard enough cafe conversations in recent months to know that none-of-the-above might seem like a more satisfying option in a bunch of races. And, yes, that seems to be a widely expressed bipartisan opinion.

But you have to go with the hand you’ve been dealt, not the one you wish you held. That means not tossing away your vote by writing in a fantasy candidate who isn’t on the ballot.

It might seem like a principled protest but in reality, it is as bad as failing to vote and then complaining about not having a voice in the outcome.

If you want to make an impact, you need to do your research and make the most informed choice you can from the options before you. And if you don’t like the result this time, wash, rinse and do it all again next election cycle.

This year, Ohio Gov. John Kasich announced that he voted for Arizona Sen. John McCain for president. In turn, McCain has hinted his vote could go to fellow Republican Sen. Lindsey Graham of South Carolina.

Both men presumably are making a statement about their problems with the GOP nominee. But in the real world, those votes might as well be for Donald Duck, Mickey Mouse or Bugs Bunny, all popular protest vote recipients over the years. These votes feed an all-too-common cynicism. Follow their lead, and you are abdicating the most important decision the American public makes — picking our elected leaders.

There are no perfect choices, but there are nonsensical write-ins, and they mock the process and give voters an excuse to divorce themselves from their government. Already, too many people aren’t engaged, even in local races where it is easier to make a difference than in national races.

For sure, some prankster is going to write in Carlos Danger, the screen name for disgraced former Rep. Anthony Weiner. But what does this accomplish except for a good laugh? Most states don’t even count write-ins for people who haven’t registered as candidates. Why bother?

Reforming the nominating processes and entrenched incumbency at the national parties will be a tough task for another day. But for Election Day, we all owe it ourselves to learn the most we can about the candidates, from the top of the ticket to those in down-ballot races, where the decisions of elected officials have the biggest impact on our daily lives.

Stand up and be counted.