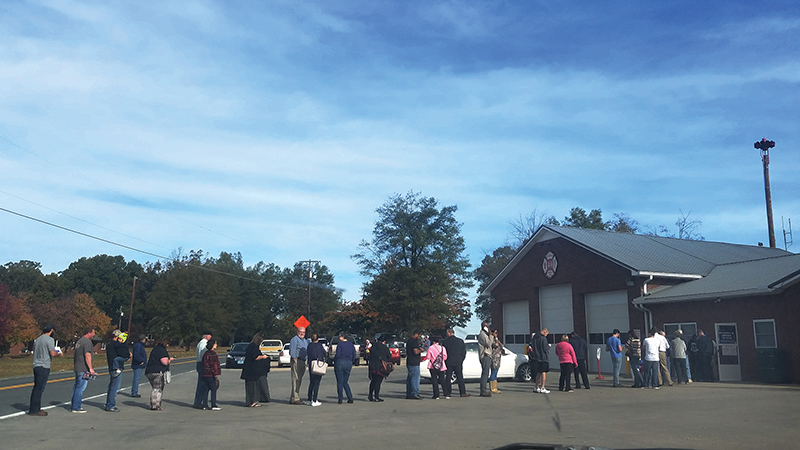 By Josh Bergeron and Shavonne Walker

With early voting and mail-in ballots combined, more than 40,000 Rowan County voters cast ballots before elections. That’s better than any other time in Rowan’s history.

Brandon Turman, 20, voted on Tuesday in his first presidential election. Turman cast his ballot at the Atwell Fire Department, in southwestern Rowan County. Turman voted for Trump, but that choice was the lesser of two evils, he said.

“Frankly, from what I’ve read about the third parties and Hillary, I wasn’t voting for Trump but against the others,” Turman said. “That’s the only reason I voted Trump is because I was voting against the others.”

Megan Livengood, an 18-year-old college student, cast her first-ever ballot at the China Grove Community Center. Her first class was canceled and she decided to go vote. Livengood said she had mixed emotions after voting for the first time.

“I waited 18 years to vote and it seems like both candidates have their pros and cons,” Livengood said.

Other voters said they were excited to cast a ballot. In southern Rowan, there was strong support for Trump. Husband and wife Laura and Robert Miller both cast a ballot for the Republican in matching T-shirts bearing his name. Laura Miller said she and her husband voted for Trump partially because of rapidly increasing insurance premiums. Because the Millers are farmers, they purchase health insurance through exchanges set up by the Affordable Care Act — Obamacare. Miller said her premiums have skyrocketed recently.

“We’re hoping for a positive change,” Robert Miller said as he walked out of the polling location.

Staci Johnson was another voter who said she was excited to vote for Trump. She was also one of the few voters who told the Salisbury Post that she was interested in down-ballot races. Johnson said she paid attention to the governor’s race and voted for incumbent Pat McCrory, in part because of his response to riots in Charlotte. Johnson said McCrory also performed well during the gubernatorial debate.

Lyniece Bradford cast her ballot at Miller Recreation Center Tuesday morning with a definite candidate in mind. She said she couldn’t vote for Donald Trump. Instead, she cast her vote for Hillary Clinton.

She said it seemed to her that Trump took the campaign as a “joke.”

“Trump is not sensible,” Bradford said.

As for people who say they didn’t agree with either candidate, Bradford said, “They aren’t making any type of statement,” with their choice to not vote at all.

She said ultimately God is in control.

“It’s time for a change,” Marcus Thompson said simply, following his statement with his choice to vote for Hillary Clinton. Marcus Thompson casts his ballot Tuesday morning at the Salisbury Civic Center. He said he hadn’t followed the campaigns closely, but he felt it important to make his vote count. Shavonne Walker/Salisbury Post

Doris Bruce, who didn’t say who she voted for, said it was more important for her to pay more attention to the candidate who was behind more pay for teachers and smaller classrooms.

During an afternoon meeting, Rowan Board of Elections Chairman Dave Collins said 250 ballots in West Kannapolis had to counted by the new machine after the prior one didn’t work. At Bostian Crossroads, precinct judges said 109 ballots that were set aside would be inserted into the new tabulator once polls closed.

At Millford Hills County, fewer than 12 people voted with the wrong ballot because of a worker error. Evans said the wrong pack of ballots was brought to a precinct. For a few minutes on Tuesday morning, the workers handed out the ballots. Voting tabulators rejected the ballots because they were labeled for a different precinct. Where necessary, Evans said poll workers would use the prior ballot to fill in a correct ballot for voters.

There were a range of other issues reported to the board of elections. At Millford Hills County, for example, an observer followed a handicapped person and a caregiver into the voting enclosure. The observer challenged the ballot, but the handicapped person was allowed to vote.

No major problems had been reported to the Rowan County Board of Elections by Tuesday afternoon.