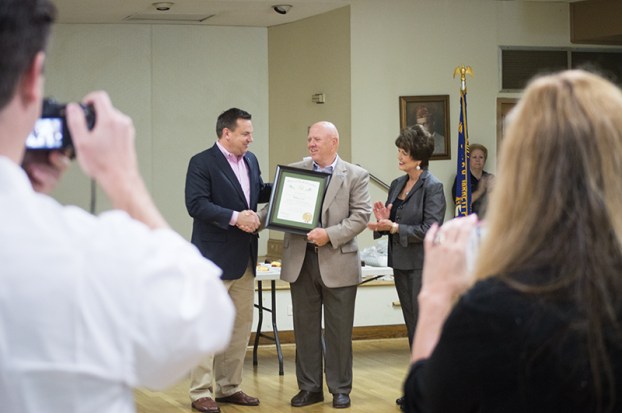 SALISBURY — Army veteran Rodney Cress has been honored for his service on the battlefield. Now, he’s also the recipient of the state’s highest civilian honor.

On Monday, Cress, a veterans’ advocate and Rowan County native, received the Order of the Long Leaf Pine Award during a luncheon at American Legion Harold B Jarrett Post 342. U.S. Rep. Richard Hudson, R-8, nominated Cress for the award because of his advocacy work. Hudson also presented Cress with the award on Monday.

“He has worked tirelessly for veterans over the years,” Hudson said during the presentation. “He talks to our office all the time and brings folks in who need assistance. … He’s always somebody that you know, when you need something, you can call Rodney and you’ll be taken care of.”

Born in Rowan County, Cress attended South Rowan High School. He attended college on an athletic scholarship and entered the Army in 1970. During his military service, Cress received the combat infantry badge, Army Commendation Medal, a bronze star for valor and a bronze star for merit. He also has 42 years of experience with the Sheriff’s Office, either full-time or reserve service.

Since leaving the Army, Cress has received a number of honors. Monday’s may be the most significant one yet. The Order of the Long Leaf Pine Society states the award is given to people who demonstrate exemplary service to the State of North Carolina and their communities that’s above and beyond the call of duty.

Cress received the award for his 31 years of advocating for veterans. His work is similar to that of the county’s veteran service officers. However, it’s all unpaid. Sometimes, Cress says, he has spent his own money to do the work.

His advocacy started in 1985 after being selected for a Vietnam study that required flying to New Mexico and going through a series of tests. When he reported back to former Congressman Bill Hefner, Cress said he began working to help other veterans.

When asked about the award, Cress said it was an honor and described himself as “just being a spokesperson for the veterans.”

“It’s all about the veterans,” he said. “I’m just a spokesman for the guys that have made the sacrifices. There should not be a need for a veteran advocate. It should be a given that if you’ve served, you’ve earned your rights. With the system the way it is, we need the advocates to speak out for those who may not be able to speak out for themselves.”

If it wasn’t for advocates, he said, some veterans may not be able to get benefits they’ve been promised.

Cress said he began keeping a list 10 years ago of the veterans he’s helped. That list now numbers more than 200 people, he said.

Many times, the award presentation comes as a surprise. For Cress that wasn’t the case. Months ago, a staffer for Hudson told Cress about the award, which is dated June 26. For a period, the award sat at Cress’ house. He said election time has resulted in a hectic schedule for politicians and elected officials had scheduling conflicts that prevented the award presentation.