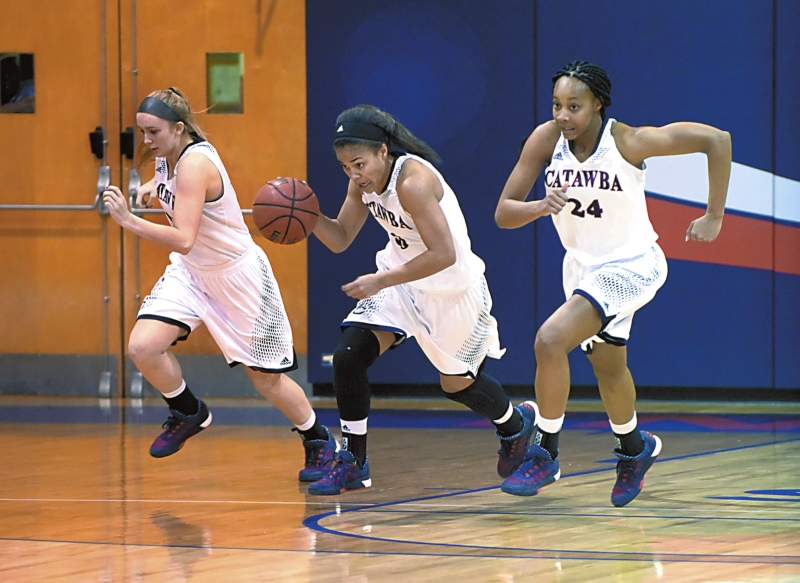 SALISBURY — Catawba’s women were picked sixth in the 12-team South Atlantic Conference in the preseason poll of the league’s basketball coaches.
If they can get healthy, the Indians could do better than that, although stress fractures are the biggest cause for stress for coach Angie Morton right now.
With the start of a new season rapidly approaching — Friday at home vs. Mount Olive at 8 p.m. — Morton listed her 14 players in two groups — healthy (eight) and injured (six).
“The girls are in great shape,” Morton said. “But we’ve had some accidents.”
Morton has no worries about team leader Brianna Danielle “Bri” Johnson. The 5-foot-8 senior guard scored 16 points per game while leading the team in steals. Johnson also set world records for grittiness and feistiness.
“I’m not the most skilled player,” Johnson said. “But I’ll try to out-hustle you.”
Johnson shoots the ball well (35 percent on 3-pointers, a deadly 85 percent from the foul line), but she was a first team All-SAC player because of her toughness. She willed Catawba to a winning season in 2015-16. The Indians were 15-14 and tied for sixth in the 12-team SAC at 12-10.
Catawba was fortunate to get Johnson, who headed for Belmont Abbey after a sensational prep career at North Iredell. She was the Statesville Record and Landmark’s Iredell County Player of the Year for the 2010-11 season.
Things didn’t work out for Johnson at Belmont Abbey.
Terrence Baxter was making a move from Queens to Catawba as an assistant coach in 2013, and Johnson’s father knew Baxter well. That connection led to Johnson choosing Catawba as the school she would transfer to. She sat out a season, then began making a major impact as a sophomore in 2014-15 when she averaged 13.5 points per game.
The other sure thing for Catawba is Terri Rogers, a 5-11 junior post player. Rogers gave the Indians averages of 14.3 points and 7.4 points in 2015-16 and was second team All-SAC.
Rogers joins Johnson on the preseason All-SAC first team for this season, so Catawba is expected to have two of the best in the league.
“We’re roommates,” Johnson said. “And I’ve got very high expectations for Terri.”
Johnson is Catawba’s only senior, but there are seven juniors on the roster. They hold the key to this season’s success.
“They’ve matured,” Morton said. “It’s their time.”
One of those juniors, 5-4 guard Serena Brown, is the third returning starter. She led the Indians with 91 assists and also produced 30 steals. She contributed 5.7 points per game.
Juniors Alexis Newbold (4.2 ppg.) and Marshauna Butler (3.4 ppg.) earned a few starts apiece last season, while juniors Brianna Hodges and Morgan Franklin haven’t played a lot to this point. Franklin was an All-State player at Charlotte Christian, and Baxter lists her as a potential breakout candidate.
The other junior is guard Breona Cowan, who transferred to Catawba from Bryant & Stratton in Virginia. She averaged 10 points per game for the Bobcats.
The sophomore class is smaller. There’s guard Lizzy Webb, the former West Iredell High star who got into 19 games last season, and 6-2 Deja Dunn, who transferred to Catawba after playing in a handful of games for Johnson C. Smith.
Catawba has added freshmen guards Madi Hallman, Toni Tucker, Kaitlyn Stevenson and Mia Angelo.
Hallman was the point guard for outstanding East Davidson High teams and averaged 14.3 points, 6.7 assists and 4.8 steals as a senior on a 30-2 2A state runner-up. She’s got that same sort of refuse-to-lose mentality as Johnson. She’s dealing with a stress fracture, but Baxter said she has SAC Freshman of the Year ability once she heals.
Tucker was one of the standouts for the Northwest Guilford team that went 30-1 and lost by a single point to Millbrook in the 4A state championship game.
Angelo averaged 12.5 points for the Socastee High team in Myrtle Beach, S.C.
Stevenson averaged 11.1 points and 6.1 assists for Wheatmore High in Trinity.
“We’ve got a lot of guards,” Johnson said. “We’ve got quickness. We can run.”
Catawba played at a swift tempo last season and averaged 68 points per game, while allowing 66.
But the Indians have to replace the 24 points per game accounted for by departed players Jada Huntley, Zhaquondalee Greer and Emma Ucinski. They also have to figure out who’s going to aid Rogers on the boards. The Indians can’t run unless they can grab defensive rebounds.
Wingate was tabbed as the preseason SAC favorite, although Anderson, picked second, was the strongest team over the long haul last winter and Morton says they’ve got everyone back.
Morton, who graduated from Catawba in 1984 after playing three sports for the Indians, has a successful track record at West Stanly High, Pfeiffer (108-90) and Catawba (208-164). She’s been at Catawba since the 2003-04 season.
Morton will be assisted by Baxter, the associate head coach, and recent Lenoir-Rhyne star Jazmine Charles.
They’ll try to keep the Indians on an even keel. Last season was a roller coaster. There was a 4-8 start, followed by an 11-3 surge, and then an 0-3 finish.