Voices of Hope concert: Remembering those who are gone 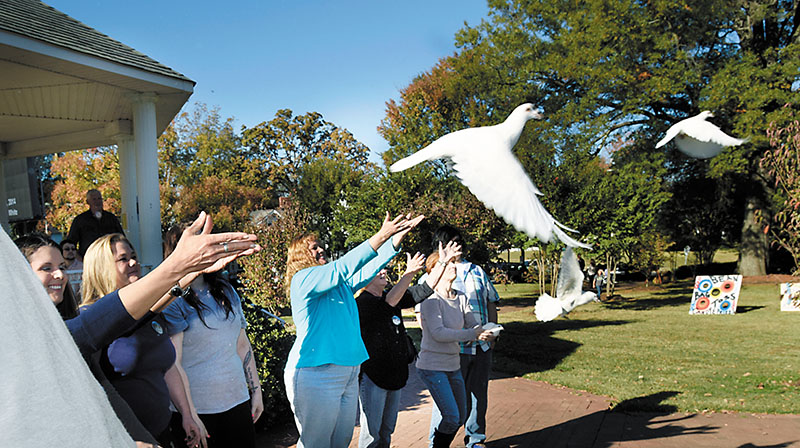 Some of those who have lost loved ones released doves at the Voices of Hope Event. photo by Wayne Hinshaw, for the Salisbury Post

SPENCER — Wendy Gilmore Baskins gingerly wiped away tears from her eyes and a smile slowly crept across her face as she began recalling memories of her beloved son Robert Stephen Gilmore, who died just nine months ago following a long battle with cancer.

Baskins stood in the Sunday afternoon sun gripping a quilt made from some of the T-shirts her son wore, including one with the Superman logo, and waited to find a spot to enjoy a concert in the park. This was not just any concert — it was the Voices of Hope, a musical event that raises funds for a local support group for bereaved parents who’ve lost children.

Baskins was one of dozens of parents who attended the event, in its 15th year and held at Spencer’s Library Park. Parents, supporters and friends held hands and hugged parents as every now and then during the concert a tear was shed over a life cut short.

The money raised benefits the Michael Yang Foundation, which was organized in 2002 by Steve and Lori Yang in memory of their son, Michael Yang. Michael died when he was 23 months old on Nov. 12, 2001. His death was unexpected and the cause never determined.

The family began with a few bereaved parents in the Circle of Hope support group, and out of that grew a way to continue to support the parents with a benefit concert. The money raised also provides scholarships.

This weekend was an emotional one for Baskins, who attended the Salisbury High game on Friday during senior night. The last of Stephen’s friends were recognized at the game.

It was hard for Baskins to be there without him.

Stephen, who was 19, was first diagnosed with cancer at the age of 3 when doctors discovered a brain tumor. When he was 15, he fought colon cancer, but the cancer returned in May 2015.

She poignantly recalled the lives her son touched and the promises she kept to continue what the family had started prior to his February death.

Baskins still works with the North Carolina nonprofit Sisters Inspiring Sisters, Inc., which provides transportation assistance to cancer patients who have financial hardships. Stephen had saved any money he received to purchase gas cards for the nonprofit.

Tameka Brown, a friend of Baskins, came with her daughter Tamia to sing during the concert as well as support Baskins.

Brown said the concert is a way to preserve the memory of the people who’ve died, and it helps the families through the healing process.

“He had an awesome spirit and impacted so many lives,” Brown said of Stephen.

Renee Pierson has been part of the support group for 16 years, since its inception. She lost her son, Tanner, just two days after he was born. He had a kidney disorder, Pierson said.

Pierson said Saturday would’ve been Tanner’s birthday, and Sunday was the anniversary of his death.

“This is a wonderful tribute to our children. He filled our hearts with joy,” she said of her son.

She said it’s important as a parent that others don’t forget their loved ones.

Throughout the evening, a large screen flashed pictures and names of the people who had died.

Darlene McElroy sang a Luke Bryan song that reminded her of how she felt when she first lost her 19-year-old son, Clint Thompson.

The song brought her to tears, but she as she stepped from the stage she was immediately embraced by other mothers who’d lost children.

Clint was in the U.S. Air Force and came home for two weeks on leave. He was a passenger in a car that his girlfriend was driving. She crossed the center line and ran off the road when she overcorrected.

It was eight years ago, but the pain for McElroy is still sometimes raw.

She recalled how for two years she grieved and had nightmares. She ate her feelings and gained weight, wearing a size 24. A much healthier McElroy, now a size 2, can talk about Clint with a smile.

She shared a story of how she’d gotten a call from the principal one day explaining that her son was disruptive to the entire class.

“That,” the principal said pointing to a goofy look on Clint’s face.

She said the principal told her Clint was very expressive and it made the students laugh, which disrupted the class.

“I can’t do anything about his face,” McElroy said with a hearty laugh, remembering what she told the principal.

“He was one fun kid,” she said of Clint. “This foundation is what helped me from falling in a hole. I’m honored to be a part of this.”

Her grandson Avery Clinton Gillespie shares his middle name with Clint and was born the year Clint died.

Throughout the event song after song brought some to tears and others sweet memories of the ones they lost.

Family members, including Erica Parsons’ adoptive sister Brooklyn, released doves in their honor. Erica was reported missing three years ago and her skeletal remains were found in September in a shallow grave in rural South Carolina.