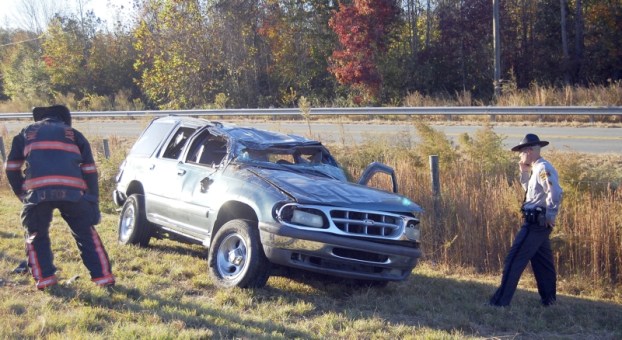 Amanda Raymond/Salisbury Post One person was ejected from a Ford Explorer when one of its tires separated. The accident occured near exit 79 of Interstate 85 on Monday.

SALISBURY — One person was taken to the hospital with a head injury after being ejected from a car in an accident on Interstate 85 on Monday afternoon.

Leah Shores, from Faith, was driving southbound on Interstate 85 when one of the tires of her Ford Explorer separated near exit 79. The vehicle veered to the right and overturned, coming to a stop on the side of the interstate. The car landed upright.

Only Shores’ vehicle was involved in the accident. N.C. State Highway Patrol Trooper D.R. Morgan was the investigating officer.

The ejected passenger was not wearing a seatbelt. The passenger was walking around after the accident, a firefighter said, but was taken to Novant Health Rowan Medical Center with a head injury.

Shores and a child who was in the backseat were not seriously injured.