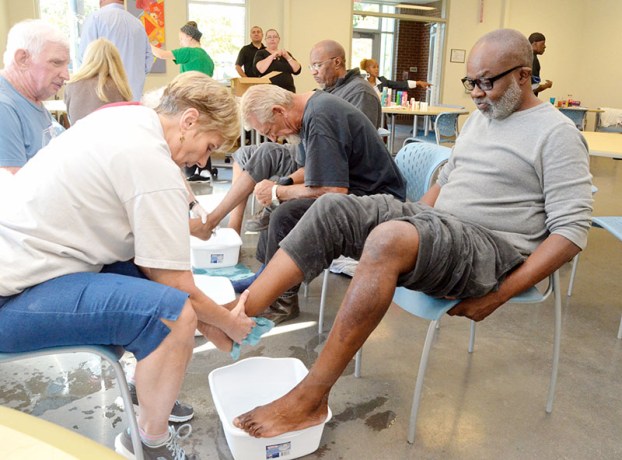 Elaine Smart, left, dries the feet of Jeffrey Stover, Saturday at the Rowan Helping Ministries shelter. Smart is a member of World Hope Church in Salisbury who partnered with Samitarian's Feet to provide shoes to 104 shelter guests like Stover. Shavonne Walker/Salisbury Post Priscilla Gamez tries on her new shoes that she received from volunteers with World Hope Church in Salisbury, who partnered with Samaritan’s Feet to provide 104 pairs of shoes to shelter guests on Saturday. Shavonne Walker/Salisbury Post

SALISBURY — The Bible says that Jesus washed his disciples’ feet. It was a sign of great humility and love. Those were the only reasons the people of World Hope Church in Salisbury needed as they prepared to wash the feet of guests of the Rowan Helping Ministries shelter.

About a dozen volunteers assembled at the shelter Saturday to present guests with shoes and socks and of course wash their feet, if they chose.

The church, located at 2203 Mooresville Road, partnered with Samaritan’s Feet, an international organization based in Charlotte, to provide shoes to 104 people. The nonprofit organization provided 90 pairs and the church purchased 14, said Paul Miller, with church missions and outreach.

“I’ve been homeless in my life. I know how good it makes you feel to put on new shoes,” Miller said.

He said Jesus was about meeting people in their real need and that’s what the church wanted to be able to do as well.

It took less than two months to coordinate with the shelter, the church and Samaritan’s Feet.

Jeffrey Stover said he didn’t mind having his feet washed and even joked about it being the closest thing he’s ever had to a pedicure.

The U.S. Navy veteran said it’s humbling to be able to receive such care from the church.

“I’m honored and appreciative,” he said. “I know Jesus did it.”

Stover, a native of Greensboro, spent his military career stationed in Scotland. He said he’s been in the shelter before and is glad to have a place to lay his head.

He works at the Hefner VA Medical Center and is grateful to be employed.

Stover admitted sometimes he’s fine and at other times he sort of slips away. He suffers from post-traumatic stress disorder and bipolar disorder.

“It’s great to have a place I can come to and get stability and get some help,” he said.

Stover said if it wasn’t for the shelter and volunteers, he would be on the street, likely sleeping under a bridge.

He’s had periods where he will “do good” and then relapse.

Following a recent incident where he had issues with his neighbors at his apartment complex, Stover said he had to get away.

“I don’t know if I had a mental break,” he said in describing the incident.

He would love the independence of an apartment again, but is working toward saving enough money for a deposit and rent.

Stover considered the shoes an early Christmas present. After getting his feet dried by a volunteer, he said he didn’t want to wear his new shoes outside.

“I’m going to save them. Those are special,” he said.

Ginger Ellis thinks it’s wonderful that the church wanted to help her and other shelter guests.

“They have giving hearts and all of us need help,” she said.

Ellis has been at the shelter for two months following the death of her husband, who was the primary breadwinner. They were married for 29 years. He died three years ago this month.

She is originally from Maine and lived in Iredell County with her husband for a number of years.

Priscilla Gamez and her fiance Stacey Byrd traveled to North Carolina because they were promised a place to stay with friends after leaving Oklahoma. The friends didn’t fulfill their part and the two found themselves living in a tent here in Rowan County.

Gamez spent time in the hospital after suffering heat stroke and Byrd told her he never wanted her to go through that again so they’ve been at the shelter for three months.

“They understand most of us don’t have money to buy what we need,” Gamez said.

The church sought out the shelter staff a few weeks ago and obtained the exact number of people they could serve and their shoe sizes. The church brought volunteers to size and fit each person with shoes.

“For them to do this is a blessing,” Gamez said.

9-year-old collecting gently used coats for those in need