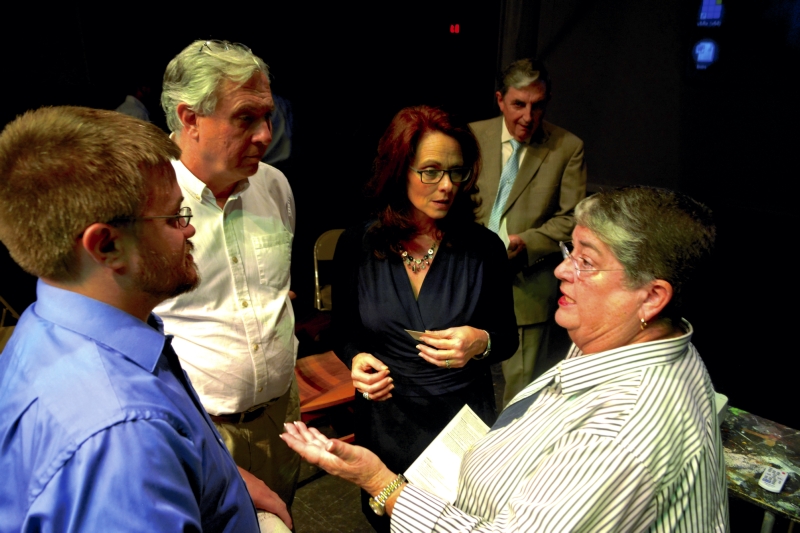 Kaye Brown Hirst, former executive director of Rowan Museum, talks with Aaron Kepley, the current director, Dr. Gary Freeze, and Jane Taubert on Thursday evening about the play ‘In God’s Own Country.’ The story of Henry Muhlenberg and his efforts to establish the Lutheran church in America will be presented next fall at PPT. A Rowan County native, Taubert serves as program manager for the German theater company, Landesbuhnen Sachsen. Photo by Susan Shinn, for the Salisbury Post.

To celebrate the 500th anniversary of the Reformation in 2017, a German theater company is bringing the story of Henry Muhlenberg to Salisbury.

The play, “In God’s Own Country,” chronicles Muhlenberg’s struggle to establish the Lutheran church in America. Jane Brown Taubert, a native of Rowan County, is project manager of Landesbuhnen Sachsen.

Taubert, a 1985 graduate of South Rowan High School and a 1989 graduate of Lenoir-Rhyne University, was in Salisbury this week, laying the groundwork for next year’s visit, and meeting with theater personnel, and potential supporters and partners of this project. On Thursday evening, St. John’s Lutheran Church — one of those partners — sponsored a meet-and-greet in Taubert’s honor at the Meroney.

“In God’s Own Country” will premiere in Germany in 2017. By the time the group reaches Salisbury, it will have performed about 18 times, Taubert said Wednesday.

Taubert moved to Germany with her first husband, a symphony conductor, in October 1990, the same month that Germany reunified. She’s been in her current role since 2005. She and her second husband, Frank — an organ builder and carpenter — are colleagues at the theater company. They married in 2007.

That same year, Germany began its decade-long Reformation celebration. Taubert first developed the idea of the play five years ago. She had read the book on Muhlenberg by Eberhard Gorner, which was then adapted for the stage by playwright Olaf Horbe.

“I thought this would be a great story to turn into a theater piece,” Taubert said, “and a great contribution to the Reformation celebration in 2017.”

The more she thought about it, the more Taubert thought it would also be possible to bring the play to America. A year and a half ago, she attended opening night of “Ain’t Misbehavin’” at the Meroney Theater with her father, Bob Brown. Taubert’s mother, Ann, died in 2012.

She knew the musical’s director, Reid Leonard, would have a lot on his mind, but she did ask if she could send him an email. She had an idea, she told him.

“This is a wonderful theater,” Taubert said of the Meroney. “I had never seen a show here growing up. It was a movie theater when I was growing up.”

So the two got in touch via email, and started a conversation, which continued when Taubert returned to Salisbury last October — and things started to happen, she said.

“We’ve been talking about this play with our board for two years now,” Leonard noted.

The Rev. Rhodes Woolly, senior pastor of St. John’s Lutheran Church, was eager to partner with Piedmont Players Theatre on the project.

“Certainly, we want to elevate the 500th celebration of the Reformation,” he said, “and we were seeking out ways to celebrate that event. ‘In God’s Own Country’ tells the story of Lutheranism in America, and you can’t understand American history without an understanding of religious history.”

Muhlenberg and his family, Woolly said, were monumental leaders in early American history.

The Salisbury collaboration continues to grow. Austin Young, a sophomore at Catawba College who’s currently directing “The Boxcar Children” at the Norvell Theater, hopes to go to Germany in the spring for a paid internship with Landesbuhnen Sachsen. Young, who’s studying for a double major in acting and environmental sustainability and leadership, will appear in the play both in Germany and in the U.S. In Germany, the play will mostly be presented in German, with some English parts. In the U.S., those roles will be reversed, Taubert said.

Leonard and Taubert hope the production will draw regular theater-goers as well as Lutheran congregations and seminary groups. The two will also be meeting with the Convention and Visitors Bureau to arrange tour packages for groups who would like to come and see the play.

“For all Lutheran churches, it will be an area celebration of the Reformation,” Leonard said.

It will also be an opportunity for the actors to visit churches and schools.

“It will be a wonderful opportunity for the actors and students to exchange ideas,” Taubert said. “It’s also exciting for my colleagues. They’ve not been to North Carolina. My hometown of Salisbury has its own charm.”