Wineka column: Shaggy always was there for friends in need 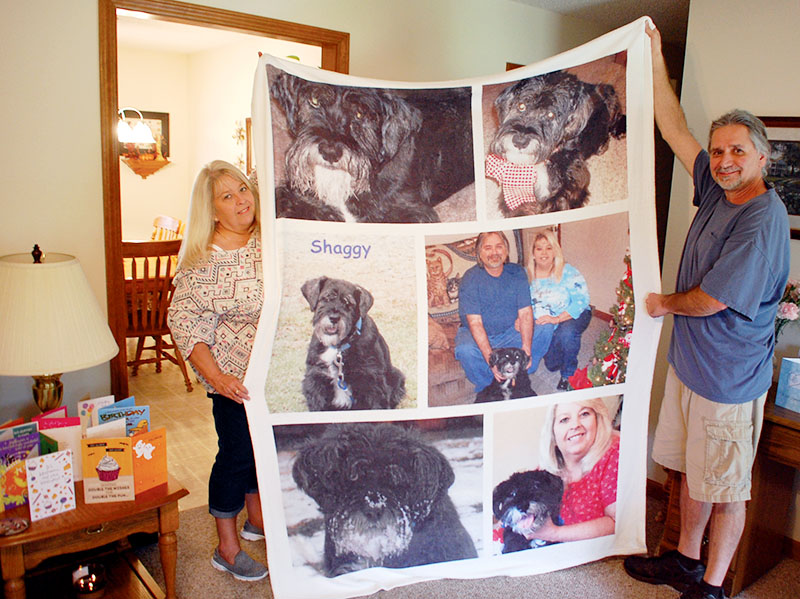 Mark Wineka/Salisbury Post DeShan Gordon and Roger Yates hold up a blanket filled with pictures of their dog, Shaggy, that was given to them by friends.

CHINA GROVE — Shaggy had a built-in instinct for when people were ailing and needed some companionship. Mary Jones was one of Shaggy’s projects.

During the last years of her life, Mary suffered from Alzheimer’s disease, and Shaggy seemed to know that. In the morning when his owners, DeShan Gordon and Roger Yates, would leave for work, Shaggy hurried next door to Mary’s house and spent the rest of the day keeping Mary company until DeShan and Roger came home.

“He was at her feet all the time,” Gordon says.

Sometimes Shaggy would even stay overnight at Mary’s house. Mary was DeShan’s aunt, so she was happy to share Shaggy and provide some joy and love for her cherished relative.

It was inevitable at times that Mary’s husband would lose track of her, and she would wander out of their yard and start walking down the country roads, not really knowing who she was or where she was going.

Shaggy went with her.

The first time, Mary and Shaggy roamed about two miles from home and wound up at a small store. Someone thought to track down the information on Shaggy’s rabies tag, and it led to Mary’s being returned home safely.

Fearing her aunt’s walkabouts could easily happen again, Gordon engraved a bone-shaped, blue metal tag for Shaggy that she attached to his collar. On one side it said, “Mary Jones, lady with dog, has Alzheimer’s. Call DeShan.”

And it gave Gordon’s work number. The tag’s other side had additional phone numbers and names to call.

Shaggy’s tag led to Mary’s being located and returned home on three different occasions. For the last year of her life, Mary lived in an assisted living center, and she died in March 2006.

Gordon and Yates came to recognize Shaggy as a kind of therapy dog. He was never trained or certified as such, but they say the dog just had a way with people in pain, such as Horace Williams, the sawmill owner down the road, and Roger’s late father, who had dealt with cancer.

When DeShan had back surgery, Shaggy never left her side. The same thing happened with Roger when he was laid up after a hernia operation.

“From the beginning to end, Shaggy was a very special dog,” Gordon says. “He was there for so many people during their times of sickness. Shaggy was the best dog ever.”

Deshan and Roger called him their “sweet baby dog.”

Shaggy, a black schnauzer mix, died Sept. 18.  He was 16-and-a-half years old. Toward the end of his life, Gordon and Yates gave him the kind of attention Shaggy had bestowed on others when they were sick.

Thanks to canine Cushing’s disease, Shaggy dealt with a benign tumor on his pituitary gland making it difficult to keep his head raised. He was blind because of cataracts and pretty much deaf from constant ear infections.

He had skin allergies and required a special diet. In his last months, Gordon and Yates built a lot of their schedule around what was best for Shaggy. If that sounds extreme, you have to realize how close the couple were to this dog.

DeShan and Roger have lived together for 32 years. They never had children, but they’ve cared for several dogs and cats, but none like Shaggy.

“That’s why this has been so tough,” Yates says. “This pretty much was our kid.”

A photo album DeShan has shows Shaggy in most of the pictures.

That’s him by many of the Christmas trees. He’s wrapped up in his football blanket in front of the television. He’s eating watermelon. He’s tossing his pink pig toy up in the air, or he’s romping through the snow — his bushy eyebrows and whiskers caked in white.

“I could not hold back the tears.”

Gordon and Yates first noticed the little black dog in 2000, when he was an abandoned pup just down the road at the sawmill of Horace Williams.

Horace and the guys hanging out at the sawmill would throw him pieces of their sandwiches. They called the dog “Little Ralph” because he seemed just as friendly as a preacher buddy whose name was Ralph.

DeShan and Roger would see the dog scale the tall mountains of logs and fear they might collapse on him someday, but they never did. DeShan started carrying jugs of water down to him and realized he was spending his nights at the sawmill by crawling up under a shed.

One day, Gordon asked Williams whether she could take the dog, judged then to be about six months old, to the Kannapolis Animal Clinic for his shots. He was a mess. Sticks and mud were matted in his long black hair, which Gordon asked to be trimmed.

“He was a shaggy dog,” she recalls. “That’s what we started calling him — Shaggy.”

From then on, Shaggy became the couple’s dog, but he already had formed a strong attachment to Williams at the sawmill. Maybe he sensed Williams was in the last years of his life, but everyday, much like he did with Aunt Mary later, Shaggy would run out of the garage and head to the sawmill when DeShan and Roger left for work.

When DeShan would return, she beeped her vehicle’s horn to let Shaggy know she was home, and he would come running.

Williams died in 2002, and Shaggy almost immediately stopped going down to the sawmill, realizing his friend Horace was gone. He soon took up with Aunt Mary instead.

Gordon and Yates have jobs at Vendors Supply in Salisbury — Roger in the warehouse; DeShan, the office. On Wednesday through Saturday nights, DeShan also works at the Stag ‘n’ Doe, where she is cashier. She has worked at the restaurant for close to 40 years.

The couple don’t know what made Shaggy so friendly, but he was loved everywhere he would go. Roger said he hadn’t heard the dog bark in more than seven years.

DeShan liked to take him to his “spa day” at Kannapolis Animal Hospital for his bath and trim. If too many whiskers were cut off his face, Roger would tell Shaggy they had left the “schnau” but cut off the “zer.”

As Shaggy’s health deteriorated and the couple carried him place to place, fed him baby food and gave him water through a syringe, they knew he would have to be put to sleep. They made an appointment for Sept. 20, but Shaggy died in their arms on the living room floor two days earlier.

“We’re really blessed we didn’t have to put him down,” Roger says.

Gordon and Yates aren’t ready for a new cat or dog. DeShan says Shaggy can’t be replaced, and she fears they would always be comparing another dog to Shaggy. That wouldn’t be fair.

“If something finds us …” Roger says, “but not right now. It still hurts.”

Through the years together, Gordon and Yates have given each other cards on birthdays and holidays. They also got into the habit of always presenting each other cards from Shaggy, writing a few words as though Shaggy had penned them.

Gordon’s most recent Mother’s Day card from Shaggy said, “To-my-always-there-for-me, takes-good-care-of-me, amazingly-wonderful-beautiful mom. Have a great day. I love you!”

The couple relied on Pet Pilgrimage of Mooresville to cremate Shaggy and provide the handsome wooden box for his ashes. A nameplate on the box identifies him as Shaggy Gordon-Yates and also as “Our Sweet Baby Dog.”

“I pray every day he has found Mary, so he won’t be by himself,” DeShan says.

He was the best dog ever.