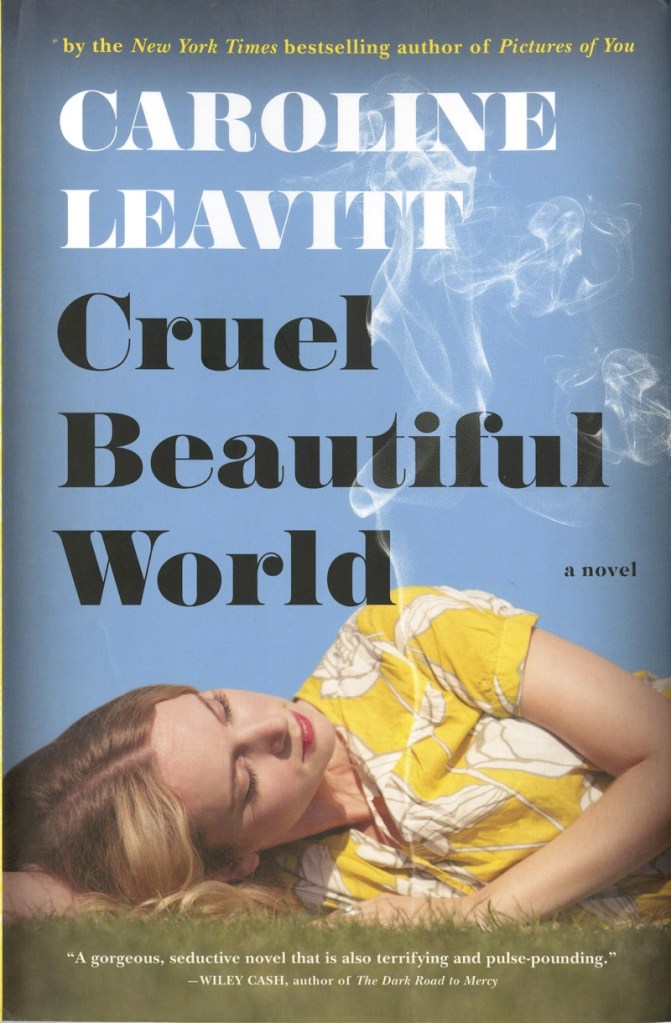 Perhaps the 1970s are long enough ago that the era has earned a mystique.

Book about teens getting in trouble in the free-wheeling 1970s, when the dangers were almost as great as they are today, are multiplying. The difference then? Everyone was turning on, tuning in and dropping out.

In “Cruel Beautiful World,” author Caroline Leavitt shows the wrenching changes the era brought with two sisters, one with her head in the clouds like “Lucy in the Sky With Diamonds,” the other firmly routed in duty and obligation.

Lucy, the wild child, is about to make the biggest mistake of her life. Sister Charlotte stays in a constant state of distress studying so she can get into college and become a veterinarian.

Iris is their loving mother, and so much more. These three, despite shaky beginnings, make a life together,

The book begins in 1969, with the first line: “Lucy runs away with her high school teacher, William, on a Friday, the last day of school, a June morning shiny with heat.”

And then Leavitt shrinks the world into a space circumscribed by controlling love.

William is the teacher all the girls swoon over, the one whose class is unconventional enough that the principal is watching.

His plan to run away with her to rural Pennsylvania and lay low until Lucy turns 18 — two years — sounds dreamy to the teenager.

Leavitt writes through experience. She knew a girl in high school with a 31-year-old boyfriend who vanished with him, never to be heard from again.

Leavitt’s fiancé died two weeks before their wedding, and she fell into a relationship with a controlling man. She eventually got out of it and found happiness.

But her confinement is absolute. William will not let her leave the isolated house they share. She can’t even have a television. And that’s not enough, no matter how infatuated Lucy is, no matter how much she relies on him for support and approval.

Iris knows how complicated love can be. Abandoned by her father when she is very young, Iris hastily marries a soldier returning to World War II. When he comes home, things change quickly, and although she and Doug love each other, their lives are a lie.

Iris’ story is deeply emotional, and her transformation into a mother brings her great joy.

Charlotte feels she is never good enough, can never do enough. High school, where, she, too, takes William’s class and exchanges longing glances, is a breeze. College at Brandeis is a challenge.

When Lucy disappears, Charlotte is angry and worried. She feels she is at fault, that she didn’t pay enough attention to her sister. Iris is heartbroken.

The police chalk it up as just another runaway. The high school is glad to see William, the nonconformist, go. No one suspects anything between Lucy and William.

Lucy is doing about as well as a teen-ager playing a grownup can do. William insists they be vegetarians, but he has to teach her how to cook. She can’t iron, either, and she’s no housekeeper. William takes the car to his job at an open school, leaving her alone all day.

Lucy is lonely and bored, and without any contact with the outside world, her writing dries up.

Rebellion is inevitable. When Lucy finds a way to get out, for at least a few hours a day, she feels alive again, and thinks she’s falling in love with Patrick, the man who gives her a job.

The sense of foreboding is thick and it pushes in on all fronts. Charlotte is having a hard time at school where there are riots over the Vietnam War. Iris is aging and struggling. Lucy plans her escape.

When Lucy is found, suspicion lies heavily all over, and Charlotte, grieving, sets out to recreate Lucy’s missing time. As she puts the pieces together, she discovers no solution to the puzzle.

It is Charlotte’s daring, a total switch from her carefully planned life thus far, that reveals some truth — but much remains unknown. We seek to know each other’s hearts, but we never can. The victory in the novel is that, possibly like the author, Charlotte comes to accept, appreciate and celebrate what she has.