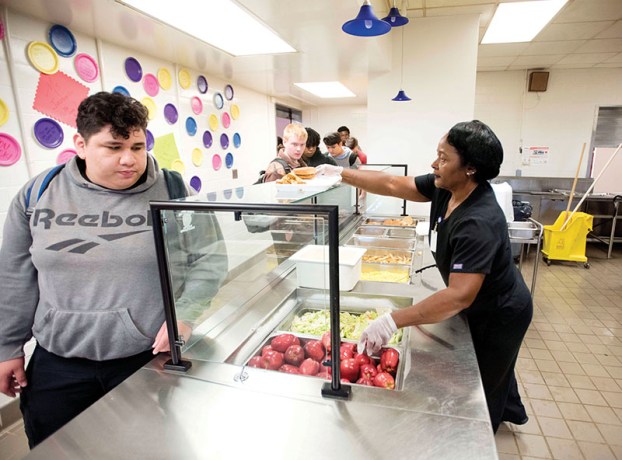 JON C. LAKEY / SALISBURY POST Doris Jackson, one of the cafeteria workers at Salisbury High School, was recently recognized by her peers and coworkers for her 39 years of service at the school. No one knew that she had been working away in the cafeteria for that long, and when it got out, people and students in the Salisbury High school family decided to make a bigger deal out of it.

‘I have been blessed’: Doris Jackson celebrates 39 years at Salisbury High

SALISBURY — It was a warm day in 1977 when Doris Jackson put on a skirt and a pair of sandals and walked from her grandmother’s house on Caldwell Street to the school system’s office on North Ellis Street.

“They thought I wanted to apply for a teacher’s job,” she remembered.

But Jackson, by then a mother of three, just wanted to work. She asked if there was anything available. There were a few openings on that day, one of them in the cafeteria at Boyden High School, now Salisbury High. Jackson took the job.

For the past 39 years, Jackson has worked steadily and quietly seeing that every student at Salisbury has something to eat — she’s never asked for acknowledgement or gratitude. Aside from a six-month stint as an assistant manager in North Rowan Middle’s cafeteria, Jackson has spent her entire career in the yellow brick school.

She’s never let much keep her from her job. Jackson remembers that she worked eight months while pregnant with her son, and when he went through school at Salisbury, she took his friends’ teasing with good humor.

She never expected to be recognized for her years of service. But on Tuesday morning when she arrived at work and rolled open the doors that cut the kitchen off from the cafeteria, she was in for a surprise.

“Who did that?” she asked a co-worker.

One of the walls was lined with colorful paper plates, filled with messages from students thanking her for all she’s done.

“Thank you for making us smile,” one reads.

And another, more touching and personal, reads “We appreciate all that you do for us. Some of us wouldn’t eat without you.”

In addition to manning the food line every day during the school year, Jackson also helped out with the school system’s Summer Feeding Program for nearly 20 years.

Out in the cafeteria, there were balloons and a banner waiting. Teachers from Salisbury High wrote thank you cards, and the school presented Jackson with a gift basket. Central office staff were also present, and gave Jackson thank you cards and a gift card. Jackson said she got a bit “teary-eyed.”

Jackson never graduated from high school herself. She attended Price High School, but had to leave in 1969 after becoming pregnant. But she didn’t let that stop her, and immediately enrolled in a GED program at Rowan-Cabarrus Community College. The next year, Jackson’s class at Price became the first class to integrate at Boyden High, and while she wasn’t with them on graduation day, Jackson said she still gets invited to alumni events.

“I guess these kids keep you young,” she said, smiling.

“Still wanting to work,” she said. “Everyone thinks I’m crazy, I think it keeps me young.”

Jackson has four children and 13 grandchildren. She lives with her son and looks after his five children — one of which attends Salisbury. For Jackson and her family, it’s a good arrangement. She takes her grandchildren to school, looks after them in the summer and watches over them on school holidays. She said she’s especially fond of snow days.

“Me and the kids just turn over,” she said.

In her spare time, she said, she likes to go on walks with her family and read Toni Morrison. Her grandchildren keep her busy, but she said she’ll read whenever she can catch a quiet moment. As long as her family needs her, her health holds out and she can keep up with the work, Jackson said she’ll stay on at Salisbury.

But when she does retire, Jackson said she’d like to travel. She’s been to Hawaii before, and Germany visiting her daughter in the military. While in Europe, they drove down to Paris to visit Disneyland and the Louvre. Jackson said she saw the Mona Lisa while she was there.

“Paris was nice, I’d like to go back there,” she said.

She’d also like to go to New York to see the Statue of Liberty and the Freedom Tower.

It’s been a long time since she could walk to work from her grandmother’s house. Back then, she said, she didn’t have a car. And things have changed around town and around the school. The office on North Ellis Street is gone, the school switched plates and real silverware for Styrofoam and plastic, and she doesn’t see as many food fights.

When Jackson started working in 1977, the students self-segregated, using different lines and sitting on opposite ends of the cafeteria. But she doesn’t see that any more.

The work has also gotten easier. Working in the cafeteria used to involve handling a lot of raw food and making everything from scratch — now things are pre-prepared.

“Change is good,” she said. “Change has been good.”

Jackson said she wanted to thank everyone for their gratitude, and said she’d passed some good years at Salisbury.

By Shavonne Walker shavonne.walker@salisburypost.com SALISBURY — “Did you vote?” It was the last question and last conversation that Lee Daniels... read more