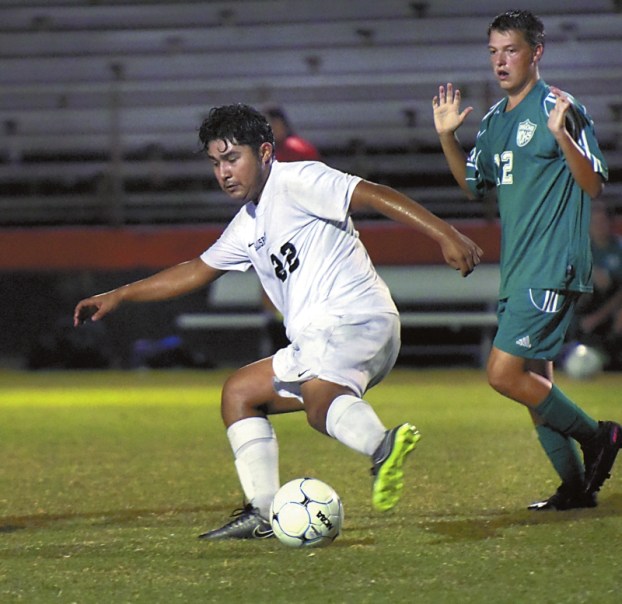 Wayne Hinshaw file photo/for the Salisbury Post ...Salisbury’s Santiago Caballero, shown in a game earlier this season, scored one of three goals for the Hornets in a 3-0 win over Polk County at Ludwig Stadium last night.

SALISBURY — Nobody knows how Salisbury’s post-season run will end, only how it has started.

The fifth-seeded and defending state champion Hornets kicked off the 2A playoffs Saturday night with a well-deserved 3-0 victory against visiting Polk County.

“It’s a good start that helps establish an identity for this group,” coach Matt Parrish said after Salisbury (14-4-4) earned a second-round match at fourth-seeded Franklin on Tuesday. “They’re not going to rest on last year’s successes. They’re creating their own path.”

Salisbury played a near-perfect game against No. 12 Polk (11-11-1) — outshooting the late-arriving Wolverines 22-7, scoring twice in the first half and controlling the midfield in the second. Losing coach Lennox Charles, who drove the team bus through a long traffic delay on I-85, had only a CliffNotes review of the Hornets.

“Coming in, I wasn’t sure if we could compete with them,” he said after Polk County closed its season on a three-game losing streak. “But maybe we did. They just had three guys that made a difference. Their other guys can play, but those three were the difference-makers.”

Those three were goal-scorers Andrew Kalogeromitros, Santiago Caballero and Melvin Bonilla. Charles went as far as calling Caballero, who also had an assist, “the player of the match.”

“As an attacking midfielder, I can trust him to win all of the balls in the air and the ones behind me,” said Kalogeromitros, who returned from a mid-October injury and scored the game’s first goal. “He’s always there.”

Caballero, who suffered an undiagnosed stomach ailment earlier in the season, got the party started just 10:14 into the match. He lifted a centering pass to Kalogeromitros, who parked himself between two goalmouth defenders and headed a shot over the head of Polk County keeper Jonah Wyatt.

“It was a perfect ball,” Kalogeromitros said after netting his 19th goal. “And their keeper was hesitant. We knew if we could just getting shots off, we could win. Attack, attack, attack.”

The Hornets doubled their lead with only 28.5 seconds remaining in the first half. Caballero, an end-to-end ball-control specialist, made it 2-0 when he gathered a loose ball some 30 yards from the cage, just left of center. With the precision of a surgeon, he bunny-hopped a long screen shot through a crowd of defenders that Wyatt never saw. It settled in the lower right corner of the net.

“One thing we’ve stressed heavily in the last couple days is shots-on-frame,” Parrish said after Caballero’s fifth goal of the year. “The most beautiful shot on earth, if it’s not on frame, is not a beautiful shot. Anything on-frame has a chance to go in.”

Bonilla tossed his teammate a verbal bouquet when he said, “With time winding down, we know Santi’s got that great shot. We were comfortable with him shooting from out there.”

The score paralyzed the Wolverines, who managed only two shots-on-goal in the second half. “Being down one (goal) or two, mentally, makes such a difference,” Charles said. “It completely shifted the game. But you know, if you don’t shoot you can’t score. That was an unexpected shot that went through a lot of people. The goalkeeper never saw it.”

By the time Bonilla scored his 14th goal “early in the second half — off a feed from teammate Juan Silva — the outcome seemed secure. Salisbury turned the final 27 minutes into a victory lap. SHS keeper Jack Fisher made five saves to record the team’s eighth shutout, but his night was made easier by the lock-down defensive play of back-liners Brody Dillon, Pedro Cruz, Luke Holland and Daniel Tinajero.

“We took care of them by breaking down their attack in the midfield,” said Kalogeromitros.

And by doing so, the Hornets have taken that all-important,  first post-season step.

“I have a lot of homework to do in the next couple of days,” Parrish said. “We’re not used to going on the road this early in the playoffs. I just know it’s going to be cold. Some of the people I’ve talked to told me, ‘Oh, you just wait. You have no idea.'”

NOTES: Franklin (16-5) is located in Macon County in the southwest corner of the state, nearly 200 miles from Salisbury. The Panthers have won nine of their last 10 matches after besting West Stanly, 3-0, in the opening round.

By Dennis Davidson dennis.davidson@salisburypost.com SALISBURY — The 14-7 halftime score was fairly misleading for someone watching the Twitter feed last... read more