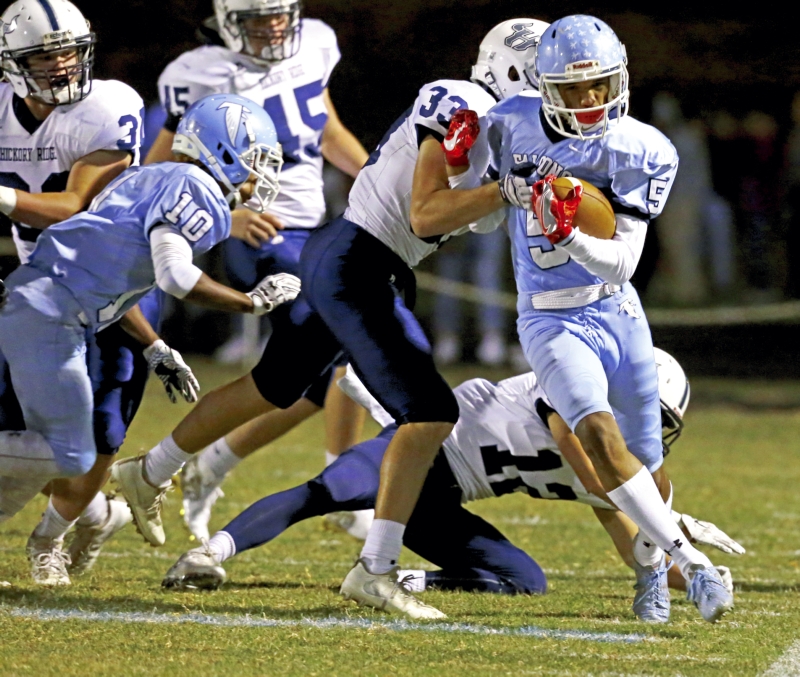 West Rowan’s Kortez Weeks (5) tight ropes down the side line trying to pick up extra yardage. Photo by James Sipes, for the Salisbury Post.

MOUNT ULLA — West Rowan’s Jovon Quarles had a string of eight 100-yard games snapped on Friday.
Quarles was stuffed for nothing — or worse than nothing — on 13 of his 15 carries, and that set off a chain reaction that led to the Falcons taking a 27-7 thumping from visiting Hickory Ridge.
“Hickory Ridge had a great defensive game-plan and they stopped us from running the ball,” West coach Joe Nixon. “They made us one-dimensional, and it’s tough to pass when they know what’s coming.”
The Bulls scored two TDs late in the second quarter to break it open, held the Falcons to four first downs for the night and picked off three passes.
The win moved Hickory Ridge (9-2, 7-2), which won its last seven South Piedmont Conference games, into a tie for second place in the league with West and Concord.
West Rowan’s defense, led by linebacker L.J. Robinson, was outstanding in the second half, but the Bulls, who led 24-7 at the break, weren’t really in need of more points. The scoreboard clock was their friend, and bulldozing running back Jeremiah Boyd pounded away at it.
The first half belonged to Hickory Ridge’s swarming defense and quarterback Trevor Shue. He threw for 207 yards, ran for 102 and tossed three TD passes. He did almost all of his damage in the first half.
West (8-3, 7-2) had a similar defensive game-plan. Stop the run and make them throw.
“We wanted to force them to pass,” Robinson explained. “But then we blew some coverages. They put us in some positions where he had to make a choice, and we didn’t communicate as well as we should ahve. Every time we made a mistake, they made a big play. Props to them. That’s a very good team.”
Hickory Ridge fumbled away a scoring chance on its first drive. On the Bulls’ second possession, the Bulls faced third-and-20 after two holding penalties. That’s when Shue found Brock Angel running free for a 40-yard touchdown and a 7-0 lead.
“Shue had a run/pass option, and he was able to hold the safety in the middle of the field and make a throw over the top to beat the corner,” Hickory Ridge coach Jason Siedel said. “He made a tremendous throw and our offensive line gave him the protection. West did such a good job against the run that they made us open it up. Fortunately, we made some plays.”
Minutes later, Shue broke containment again on a third-and-15, racing for 14 yards, and then the Bulls converted on fourth-and-inches. That led to a Grant Minor field goal and a 10-0 lead early in the second quarter.
But then the Falcons made a move — Stolsworth to Weeks over the middle. Weeks cut back to the right sideline and then out-legged two defenders to the end zone on a 78-yard scoring play. That made it 10-7, and the Falcons had gotten their second wind and were ready to make an emotional charge on Senior Night.
“That was a big TD and I was thinking it was going to be the momentum-changer we needed,” Weeks said. “On that play we executed, but Hickory Ridge’s defense was good all night.”
When the Falcons got an apparent stop on third dwon with under four minutes left in the half, it looked like the Bulls would settle for a 10-7 lead to the break, and West would have a chance to regroup and adjust. But Hickory Ridge faked a punt from its 45, and Donovan Hayes plowed for just enough yardage for a first down. That 2-yard run proved to be a game-changer.
On the very next snap, West was burned deep again. It was Shue to Jarrett Garner for a 53-yard strike and a 17-7 lead with 3:25 left in the half.
West desperately needed a score before the break. Instead the Falcons took themselves right out of the game with an interception by HR linebacker Connor Helm. That led to another touchdown pass by Shue. This one went to Angel, who had slipped behind corner Deyquan Byrd.
“Byrd is so good that we game-planned for him,” Seidel said. “We tried to do use different formations to get him off our best receiver. He’s aggressive, and on that touchdown, we just caught him peeking in the backfield. Then we had a hell of a throw and a great catch.”
In the second half, there was just one score, a short Minor field goal set up by an interception and nice return by Isaac Figueroa to the West 13.
West’s defense dug in and limited the Bulls to a single first down in the second half. West even made a goal-line stand, halting the Bulls at the 1-yard line on fourth down.
“We got conservative in the second half,” Seidel said. “We threw two interceptions, but both of them pinned West back deep and they were as good as punts. Mostly we just trusted our defensive staff and our defensive players, because those guys were having a tremendous night. When we were down there on the 1-yard line we went for it on fourth down (instead of kicking the field goal) because we didn’t think they were going to be able to go 99 yards on us.”
West wasn’t going anywhere. Stolsworth was 9-for-25 for 131 yards, and the running game was non-existent.
“We knew coming in this was going to be a tough matchup,” Nixon said. “We fought hard, but Hickory Ridge was just very good tonight.”
Nixon, Weeks and Robinson all talked about the Falcons correcting the things that went wrong next week in practice. And at least one person thinks they’ll be a handful in the 3A playoffs. That person is Seidel, whose team is headed to the 3AA playoffs.
“West is tough, they’re good, and they’ve got dangerous players,” Seidel said. “They’ll be in the small half of the 3A playoffs, and I think you’ll see them make a deep run.”