East Rowan all over the Raiders, 47-0 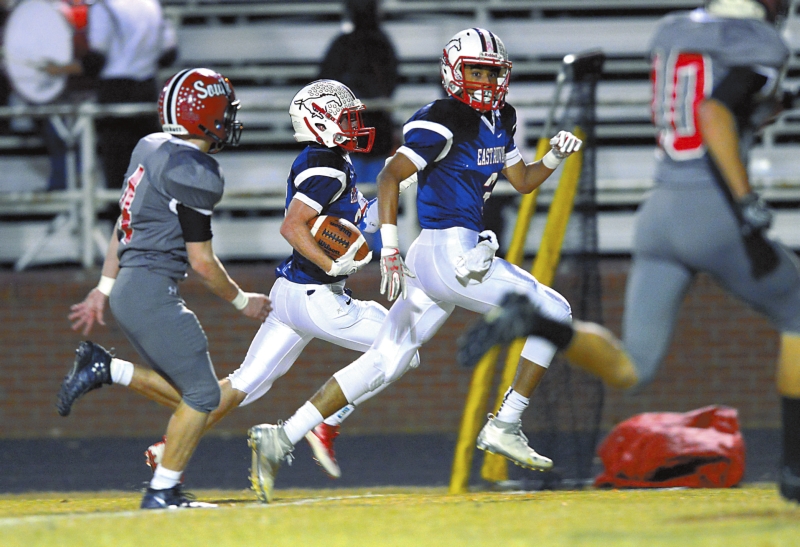 East's Wesley Porter rusn for a touchdown as teammate Franklin Downing looks to block someone. Photo by Wayne Hinshaw, for the Salisbury Post

The Mustangs — who had yielded 159 points in their three previous games — pitched a complete-game shutout and thrashed visiting South Rowan, 47-0, in the SPC finale for both teams.

“This is the best our defense has played in well over a month,” coach Kenneth McClamrock said after East (4-7, 3-6) kept it post-season playoff light flickering. “And our offense did a lot of things right. Now we hope to move on. You play to be playing in November — and anything can happen in November.”

South (1-10, 1-8) closed its season with an uninspired performance. The Raiders were intercepted on their third play from scrimmage, collected only 45 yards total offense and never penetrated deeper than the East 26-yard line. Their defense surrendered touchdowns on four of East’s first five possessions and was punctured for 365 total yards.

“I was disappointed in the effort we put out tonight,” said Daniel Yow, South’s second-year coach. “East was a good team but I don’t think they’re 47 points better that we are. We beat ourselves. We knew their defense would be hard to run against, but we didn’t think it would be that hard. I don’t know if we even had a positive yard of offense.”

They didn’t at halftime. East held the Raiders to minus-13 yards in the first half and built a 37-0 lead on four touchdown passes by sophomore Justin Smith, a botched punt play that turned into a safety and a 51-yard touchdown run by two-way terror Wesley Porter.

“It feels good to get a win,” senior teammate Max Wall said after rushing for 101 yards on just five carries. “We played how we know we can play.”

Wall opened the scoring when Smith found him near the gate to end zone and lobbed a 25-yard touchdown pass just 2:25 into the game. Two minutes later it was 15-0, courtesy of Smith’s 43-yard TD throw to sophomore Sam Wall, Max’s kid brother. And before the opening period was over, Porter scored on a right-to-left, end-around play. But perhaps the game’s most-telling play came early, when East’s Raequon Gibson picked off a South pass at the 25-yard line just 94 seconds into the match.

“We came in with a great game-plan,” said Porter, a strong safety by trade. “Stop the run, don’t let them get any momentum and keep their offense off the field. On that first pass we got pressure on the ball and forced the quarterback to make a bad play. Right away, we showed them how it was going to go tonight.”

It kept going in the second quarter, when Smith connected with Sam Wall and Franklin Downing on TD plays. In the third Max Wall scored his 15th touchdown of the season on a film-at-11, 74-yard run down the left side. South appeared to have him cornered on the play, but he tiptoed away from danger, then used a burst of speed to race into the end zone.

“You know what?” Smith asked after passing for 146 yards. “I cherish sharing the field with Max Wall. He’s so much fun to be around and we’re so good together.”

“Max makes our offense click,” McClamrock said after a running clock was used to melt away the last 18 minutes of the game. “He was super tonight.”

When it ended, Yow was asked to reflect on a season that began with hope before spiraling into despair.

“It’s definitely not the season we wanted,” he said. “The potential was there, but potential is just a rock sitting on a hill. If you don’t get it moving, it’s not going to go anywhere.”

Now comes the hard part for East — a weeklong wait before playoff pairings are announced. The Mustangs are a longshot to secure a high seed and a long bus ride out west on Nov. 18, but insist they’ll be ready.

“Hey, my sophomore year we made it as a 15 seed and had to play against a 2,” Porter recalled. “Nobody believed in us, at least not around here. But we went out there and won 50-49 (against Morganton Freedom). That’s all we need is a chance.”