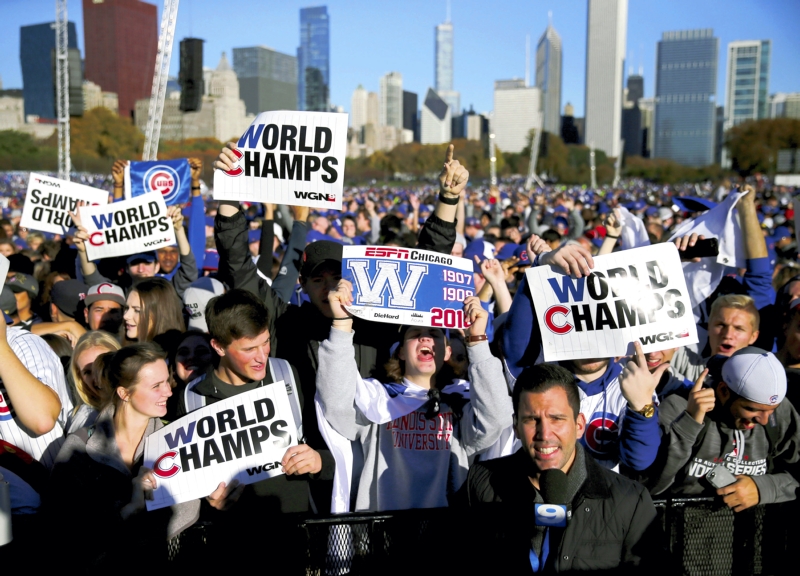 CHICAGO (AP) — November blazed like dazzling springtime in Chicago during a massive parade and rally Friday to honor the Cubs’ first World Series title in 108 years and fulfill more than a century of pent-up dreams.

A new generation of Cubs fans — riding in strollers or on their parents’ shoulders — joined their elders to cheer the baseball champions. For the youngest, the day would be their first bright memory of following a club once known as “lovable losers.”

Their parents marveled at how their children will know the confident, young team as winners.

“It’s a whole new Cubs world,” said Dean Anderson, 51, of Chicago, who brought his 10-year-old son, Chase, to see the players’ motorcade as it rolled out from Wrigley Field at the start of the parade route. The “lovable loser thing” — and all the accompanying lore embroidered by long-suffering fan loyalty — may be lost to the newest fans, Anderson said, but “we’ve had enough of that.”

A crowd, estimated by city officials at 5 million, lined Michigan Avenue and Lake Shore Drive to cheer the motorcade of open-roofed buses carrying the players along a 7-mile parade route from the north side ballpark to sprawling Grant Park. The city’s tally included everyone who lined the route and the rally throngs. Friday was already a scheduled day off for Chicago Public Schools.

Revelers crawled up trees and streetlight poles to get a better view along the route. Others sat atop shoulders to watch the team buses shimmering under a spray of red and blue confetti.

During the jubilant festivities at the park, 39-year-old retiring Cubs catcher David Ross posed for a selfie in front of a multitude of roaring fans.

Ross and the other players put their arms around each other and sang “Go Cubs Go” from the stage along with the blissed-out crowd.

Team manager Joe Maddon — wearing a stocking cap, sunglasses and a jersey over a “We did not suck” T-shirt — looked out over a sea of blue.

“Welcome to Cubstock 2016!” Maddon said. “This is an incredible moment for all of us. Never have I experienced anything like Wrigley Field on a nightly basis. … I want to congratulate you fans also. Thank you for being so patient.”

East Rowan all over the Raiders, 47-0