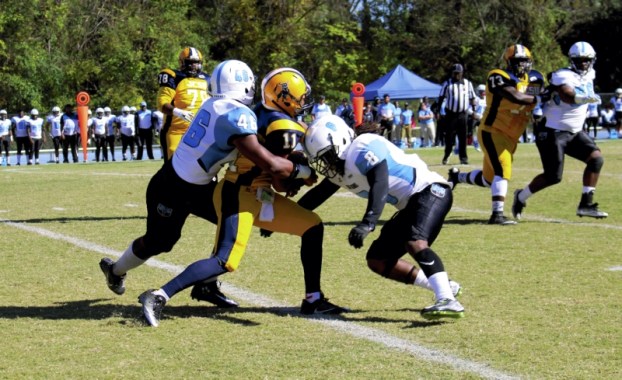 CHARLOTTE — J.C. Smith spotted Livingstone an 8-0 second quarter lead but roared back, scoring 30 unanswered points to take a convincing, 30-8 victory in the Commemorative Classic here at Irwin Belk Complex on Saturday afternoon — the final game of the season for both squads.

After a scoreless first quarter, Livingstone jumped ahead after putting together a nine-play, 66-yard drive that was capped by a 3-yard run by running back Justin Ruffin. Ruffin, a former Salisbury High School star, then went into the end zone for a two-point conversion, with 4:33 left in the first half.

The lead was short-lived for Livingstone, as the Golden Bulls (3-7, 3-4 CIAA) responded before halftime. Receiver Gabriel Yuille caught a 23-yard scoring pass from quarterback Harold Herbin with just 1:31 left. The play concluded a seven-play, 77-yard drive and JCSU also went for two points, with Herbin connecting with receiver Eugene Holmes.

In the third quarter, JCSU would take the lead for good when linebacker JeJuan McCalston picked off a pass from Blue Bears’ quarterback Xavier Longerbeam, returning it 12 yards for a touchdown. Kicker Brandon Howard added the extra point for a 15-8 lead.

Less than two minutes later, a short punt by safety Danny Robinson, filling in for Keene, put the Bulls in business at the Livingstone 27-yard line. The Blue Bears’ defense put up a stop, but Howard nailed a 40-yard field goal to extend the Bulls’ lead to 18-8.

Livingstone’s next drive started at its own 32-yard line, but on first down, running back Jarius Richardson fumbled and JCSU’s Carlo Thomas recovered at the 35.

On the next play, the Bulls’ Desean Binyard bolted 35 yards for a touchdown with 7:58 on the third quarter clock. Howard’s point-after kick was no good but basically, in just two minutes and four seconds, JCSU scored 16 points.

Once again, it was the turnover bug that doomed Livingstone. Those miscues were just two of the five turnovers for the Blue Bears on the day.

Livingstone went into Saturday’s game with 24 turnovers for the season while J.C. Smith had 22. Those totals were two of the highest in all of NCAA Division II. By the end of the game Saturday, and the season, those numbers were 29 turnovers for Livingstone and 25 for JCSU, respectively.

The Golden Bulls capped the scoring in the fourth quarter, when Braxton Gambrell burst up the middle after receiving a pass from Herbin with 9:27 left to play.

Longerbeam, a red-shirt freshman from Panama City, Fla., had another tough day, getting intercepted three times while completing 12 of 26 passes for 131 yards. Another freshman, Thaddeus Bell, relieved Longerbeam and completed 15 of 23 passes for 160 yards. Bell also threw an interception.

Bell led Livingstone on two long fourth-quarter drives but the possessions ended on downs, both times inside the JCSU 30-yard line.

JCSU all but shut down the Blue Bears’ ground game, allowing just 31 yards net, after tackles for losses. Collectively, the JCSU defense made 16 tackles for loss for a total of 70 yards.

Livingstone’s leading receiver, Everett Ransom, had a big day. Ransom finished the season with 60 receptions, after a nine-catch, 132-yard game yesterday. Another wide out, Spencer Ludin, had six catches for 82 yards against JCSU, giving him 42 receptions for the season.

Individually for the Golden Bulls, Herbin finished with 191 yards passing and two touchdowns after a 10-of-23 effort.  Binyard led all JCSU rushers, finishing with 47 yards on 12 carries and a TD.

Defensive end Armond Cox was chosen Livingstone’s most outstanding player for the game, making seven tackles, 2.5 for losses totaling 14 yards. One of the tackles was a QB sack. Defensive back Kovarius Williams also had seven tackles.

Robinson and cornerback Gregory Hines had interceptions for Livingstone. Hines led the Blue Bears on the season with five picks.

NOTES: The Commemorative Classic celebrates the rivalry between Livingstone and J.C. Smith, the oldest among historically black colleges in the nation. … The two schools met first on Dec. 27, 1892, on the front lawn at Livingstone when J.C. Smith was known as Biddle College. Biddle won that first meeting, 5-0, and yesterday’s contest was the 80th in the series’ history. JCSU leads the series, 46-31-3, and has won nine of the last 11 games. … The 30-8 score happened one other time in the series, when the Blue Bears won in 1999.