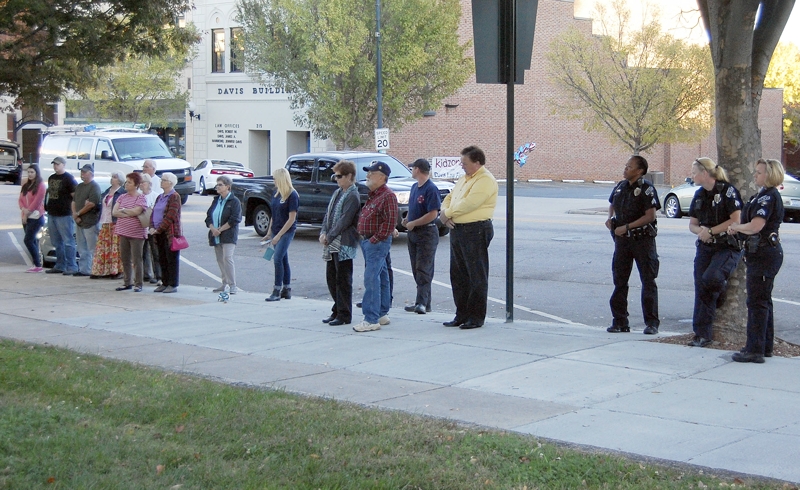 Paula Bohland, executive director of DSI, welcomed the local heroes and thanked them for their service.

“We know from looking around our downtown what a beautiful, beautiful environment we have, and we know that that’s a result of all of these people, the firefighters, the police personnel, veterans and all of us who work every day to make this a good community,” she said.

Mayor Karen Alexander read the city’s proclamation to help end veteran homelessness and the proclamation honoring the hidden heroes in the community, including caregivers.

Alexander challenged attendees to thank emergency and military personnel when they see them in public.

“…Without their services, we wouldn’t have the community that we all want and desire,” she said.

The National Anthem and taps were performed.

Quinncy Moss, a South Lexington firefighter for almost a year, said being a firefighter is not an easy job and he appreciated the ceremony.

“It means a lot knowing what we do and what we see,” he said.

Christian Barry, South Lexington firefighter engineer, said it also gives them a chance to interact with the community.

Staff Sergeant Terrance Bynum agreed, saying it gets people out of the office and into the community to give back to the local Rowan population.

Staff Sergeant Chance Hendrix said they were also able to honor the veterans who attended.

“It’s a way to support and honor the people who came before me,” he said.

Both Hendrix and Bynum are active duty servicemen and recruiters for the United States Army.

Officer R.K. Rule said she is grateful for the support the Salisbury Police Department gets from the city, DSI and the community.

“We appreciate the support that we get from the community,” she said.

Throughout the night, luminaries were available for sale at Queen’s Gifts for $1 to be placed throughout the downtown. All proceeds were donated to Elizabeth Dole’s Hidden Heroes Foundation.