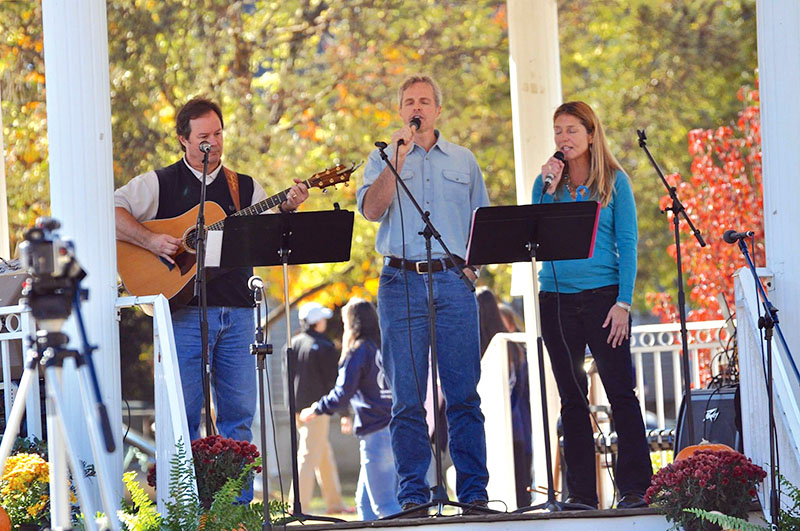 submitted photo Musicians perform during the 2013 Voices of Hope event. This year’s event is Sunday.

In October 2001, Michael Yang did what countless other toddlers have done — he went to a pumpkin patch, picked out a tiny pumpkin that was just perfect for him.

Michael died not long after that fun outing. The next year, his parents, Steve and Lori Yang, began the Voices of Hope concert. The annual concert of hope and healing has become a tradition each November.

“It’s not just for parents who have lost children,” Lori says. “It’s a day for families to be together and value life — and recognize death. It’s a day to celebrate life, heal through music, and enjoy the company of others.”

The 15th annual Voices of Hope concert takes place tomorrow, Sunday, Nov. 6, from 1 to 4 p.m. in Spencer’s Library Park. Musicians from throughout the area will be sharing their talents as the community once again comes together to remember loved ones.

The Yangs wanted to host an event to remember Michael during this time of the year, but October was already a busy month on the local calendar. They settled on the first Sunday in November, later realizing it was All Saints Sunday, the day that churches around the world pause to remember loved ones who died the previous year.

“It was a blessing that the concert fell on All Saints Sunday,” Lori says. “It was perfect.”

That first year, Lori invited parents who had lost children to send in their pictures for a slide show. Over the years, that slide show has grown to include 112 names. Children’s names are also read aloud at the close of the afternoon.

This year, Lori says, the slide show will include a picture of Erica Parsons, the young girl who disappeared in 2011 and whose remains were recently identified.

“We will be doing something special to remember Erica,” Lori says.

But indeed, the afternoon is a special way to remember all children who have died.

Lori is pleased that a sunny day is in the forecast. As always, hamburgers, hot dogs, popcorn, baked goods and drinks will be available for purchase. You may purchase raffle tickets at $2 each for the opportunity to win $100 cash, a $50 gas card, a $50 gift card to Bangkok Restaurant in Downtown Salisbury, two tickets to a Piedmont Players Theatre show, a $25 Walmart gift card, or a homemade quilt. You need not be present to win.

“The quilt is the real gem,” Lori notes. “It was made with love by my grandma and her quilting gals.”

All proceeds from the Voices of Hope concert benefit the Michael Yang Foundation’s Circle of Hope support group for bereaved parents, and Young Life scholarships.

“Voices of Hope is so affirming for those of us who have lost a child,” Lori says. “It affirms those of us who have such an appreciation for people to take time and remember our children. It’s OK to ask about a child, and to talk about a child that you’ve lost. To hear your child’s name read aloud is an affirmation that they had a purpose in life, and that people remember them. It gives us a time and place to honor these children and their families.”

For more information about the Michael Yang Foundation, visit www.michaelyangfound.org.