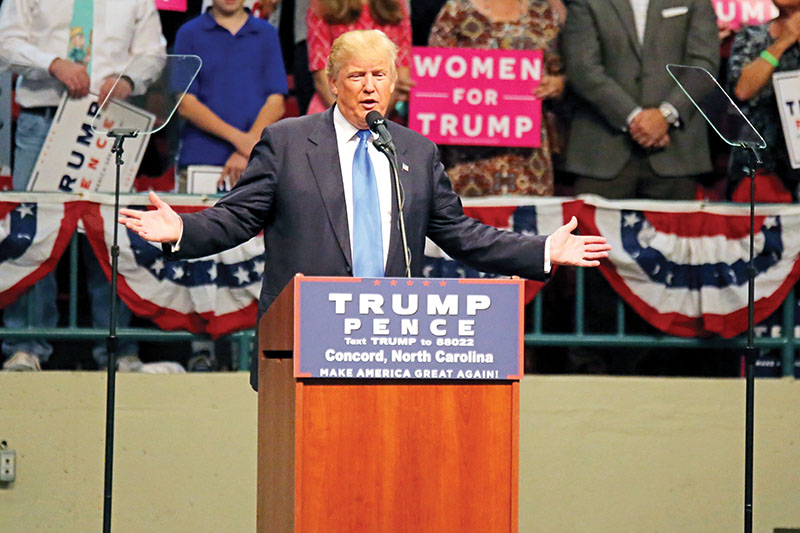 Republican presidential candidate Donald Trump speaks at the Cabarrus Arena and Events Center in Concord. Photo by James Sipes, for the Salisbury Post.

Trump spoke to a mostly full Cabarrus Arena and Events Center — his second stop at the site since beginning his bid for president. From a border wall to an email scandal facing Democratic presidential nominee Hillary Clinton, Trump’s speech touched on many of the talking points he’s become known for throughout the presidential campaign.

He railed against the “crooked media,” trotted out his “crooked Hillary” nickname, promised to end corruption in the nation’s capitol and pledged to impose new taxes on companies that outsource jobs. He even mixed a few Rowan County references into the speech.

“We are five days away from the change you’ve been waiting for your whole life,” Trump said during his speech.

That change, he said, begins with repealing and replacing the Affordable Care Act. Trump noted rapidly increasing premiums across the country. Insurance premiums for one of the most popular plans in the Charlotte area are estimated to increase by an estimated 40 percent, according to a report from the Kaiser Family Foundation.

If he becomes president, healthcare would cost “a lot less” and the quality of care would be “much better,” he said.

As he jumped from topic to topic, going off script occasionally to fire up the crowd with popular lines, Trump stopped to address Clinton’s email scandal. She used a private email server during her time as secretary of state.

He questioned how America would react if he was in Clinton’s shoes. Trump guessed people would call for him to immediately leave the race. If Clinton becomes president, Trump said she would be faced with renewed investigations and, potentially, a criminal trial.

“Honestly, she has no right to be running,” Trump said to loud cheers. “If she were to win, it would create an unprecedented constitutional crisis that would cripple the operations of our government.”

He spoke of a “contract with the American voter.” That contract includes imposing term limits on all members of Congress and a lifetime ban on government officials becoming lobbyists for foreign governments.

“I want the entire corrupt Washington establishment to hear and heed the words we, we as a group, all say right now when we win on Nov. 8,” Trump said, prodding the crowd into the now-popular “drain the swamp” chant.

He ranked bringing jobs back to America as the most important part of his “contract with the American voter.” During his talk about the economy and negative effects of NAFTA, Trump used local industries as examples, including Pillowtex and Freightliner. He likened them to “rusted out factories and empty buildings.”

Originally founded by the Cannon Family, the mills that became owned by Pillowtex employed thousands of people at one point. They’re the reason that Kannapolis exists today.

Pillowtex declared bankruptcy in 2003. Suddenly, thousands of people that worked in the Kannapolis mills were unemployed. Since the bankruptcy, the Pillowtex site has been redeveloped into the North Carolina Research Campus. Kannapolis also built its city hall on the site.

Freightliner recently cut hundreds of jobs at its Mount Holly and Cleveland facilities.

During his speech, Trump said Pillowtex laid off 1,125 people and took the jobs to Mexico and other countries. The company, however, laid off significantly more employees and shut down entirely instead of shifting jobs to another country.

When talking about Freightliner, Trump specifically focused on the Mount Holly plant. Trump said those jobs were also moved to Mexico. Although the company does operate in Mexico, it has cut jobs there too.

Companies that move jobs to other countries and attempt to ship goods back into America would face 35 percent tax on imported items, he said.

“You know what’s going to happen then, right?” Trump asked. “They won’t leave.”

Dean Hunter, a school board member and Kannapolis pastor, guessed Trump’s lines about local places were fed to him by campaign staffers. Hunter attended the speech on Thursday. During the primary, Hunter was a supporter of GOP candidate Ted Cruz. Now, he is a Trump supporter. Hunter’s reasons for supporting the GOP nominee include his policy positions on issues such as the economy and national security.

“Whether it’s jobs or people, I think his principles really align with what I believe,” Hunter said. “Now, his morals may not, but his principles do as far as business … He has said some things, but we have all fallen short of God’s glory, and I would never be the one to cast the first stone.”

Hunter said the Republican platform, for the first time in his lifetime, ranks as the most conservative biblically than ever on core issues. Hunter said he believes Trump has truly created a movement in American society.

Trump frames his movement as representing the interests of the American people rather than special interests.

“We’re going to take care of the people of the United States,” he said. “We will become a rich nation again, but to be a rich nation we must also be a safe nation.”

On national security, Trump called for a stop to Syrian refugees being allowed into the United States and promised to build his now-famous border wall. He joked that ISIS dreams about Clinton becoming president.

As he speech drew to a close, Trump focused on a single message: the importance that people vote.

“Get out there no matter how you feel,” Trump said. “If you are so sick, if your doctor gives you the worst prognosis and says ‘Jimmy or Jane, I’m sorry to tell you but you won’t be around for two more weeks.’ It doesn’t make a damn bit of difference. You get out of bed and you vote.”