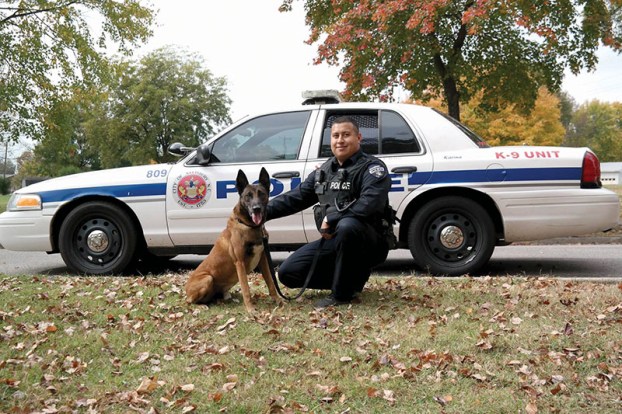 Salisbury Police Officer Joseph Martinez and K-9 Jack are pictured here. The 10-year-old Belgian Malinois retired earlier this week after nine years with the department. Jack was gifted to Martinez and will stay at the officer's home. Submitted photo

SALISBURY — It was the final shift recently for Salisbury Police K-9 Jack as he retired and was recognized during a City Council meeting on Tuesday. The 10-year-old Belgian Malinois is healthy, but not as agile for police work.

The dog was given to his handler Joseph Martinez and will reside at the officer’s home. Martinez and Jack began working together in February 2015. Prior to that time, Jack worked with another police officer who eventually became employed at the Rowan County Sheriff’s Office.

The K-9 was the center of controversy in 2014 when a blogger claimed the dog was not being well cared for, including being placed in a kennel that was too small. The city and then Police Chief Rory Collins refuted those claims of neglect, which were unfounded.

“He’s still a good, healthy dog, but as far as police work is concerned he’s getting too old,” Efird said.

Jack’s retirement will bring the police K-9 unit to five, and it will remain at five Efird said. There will be at least one K-9 on each patrol team.

“Although Jack and I did not work for an extended period of time, we still got a lot of work done,” Martinez said.

He said thanks to Jack, the community is a lot safer because the drugs the dog located were no longer on the streets.

In 2015 and 2016, Jack has located 19 dosages of xanax bars, 34 grams of marijuana, and three grams of heroin. The K-9 was instrumental in four arrests and has put his life on the line for Martinez and other officers, his handler said.

A memorable arrest Martinez recalled was in June following an armed robbery. Officers chased a man who took a woman’s cell phone and $300 at gunpoint. Officers weren’t able to get to the man, who ran into a wooded area.

Jack was sent into the wooded area. The suspect heard Jack barking and surrendered. Jack was even able to find the victim’s cell phone that the suspect ditched in the woods.

In March, the dog was able to assist U.S. Marshals while they served warrants on a man hiding at a local apartment complex. The man barricaded himself in a bedroom on the second floor of the apartment building.

The suspect jumped out of a second-floor window when he heard Jack approaching him. The marshals were able to apprehend the suspect.

“Jack has had a long and successful career here at the Salisbury Police Department. Without a doubt, I believe Jack will miss coming to work every day with me, but I believe Jack will enjoy retirement very much and enjoy being a regular dog at home,” Martinez said.

• Rowan-Salisbury Board of Education member Chuck Hughes in a May 9 board meeting voted against a policy which would... read more