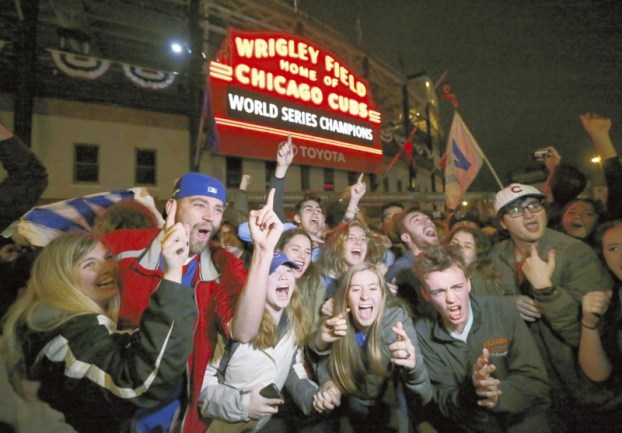 Chicago Cubs fans celebrate in front of Wrigley Field in Chicago on Wednesday, Nov. 2, 2016, after the Cubs defeated the Cleveland Indians 8-7 in Game 7 of the baseball World Series in Cleveland. (AP Photo/Charles Rex Arbogast)

CHICAGO (AP) — They spoke of heartbreak and black cats and goats. And finally, Chicago Cubs fans spoke with pride about winning it all.

This is new territory for these long-suffering fans and it showed on Thursday, the day after the Cubs wrapped up their first World Series championship since 1908 with a Game 7, extra-inning thriller in Cleveland against the Indians. Amid all the celebrating and relief and joy ahead of Friday’s big downtown parade, there was a bit of confusion on just how to proceed.

After all, 108 years of falling short is a long time.

“That just dawned on me yesterday that Chicago’s not going to have that reputation anymore of lovable losers,” said Peggy Herrington, 49, of Chicago. “We’re not going to fall back on that and think about the goats or anything.”

She and others were just fine with that.

“You get all the ridicule from your friends — ‘lovable losers,’ ‘they always blow it, I know they’re gonna blow this,’” said Michael McNeela, a 66-year-old Chicago retiree who has rooted for the Cubs since he was 11. “And they have to eat their words. … I got a (championship) hat now and they’re going to see it and they have to shut up.”

The story of the Cubs, like so many teams (including Cleveland), is filled with sadness and what ifs. It’s just that the Cubs have always seemed to come up empty in the most puzzling ways. The August collapse in 1969, which included a black cat on the field at one point, and of course the 2003 postseason when fate and a fan named Steve Bartman stepped in and suddenly a trip to the Series was gone. But those milestones will fade now, along with the fabled curse of the billy goat, leveled in 1945 — the last time the Cubs reached the Fall Classic.

“I think what this does for the identity of the Cubs fan is maybe they will have to deal with less of that tired old trope of the goat, the black cat,” said Lin Brehmer, a devoted fan and local radio host. “That’s all in the past now. You can forget that part of our narrative.”

There is a new story for Cubs Nation and fans were eager to share it with each other. Thousands celebrated into the night in the streets of Wrigleyville and many bleary-eyed faces were seen on the morning commute as a new era dawned in Chicago. The Cubs returned to a hero’s welcome in the wee hours, with first baseman Anthony Rizzo cheered at Wrigley Field as he held the World Series trophy aloft.

Many found ways to share the joy with loved one who did not live long enough to see it for themselves, spelling out their memories in chalk on the brick walls of the ballpark. Among them was Mike Compton, 59, of suburban Arlington Heights.

“He passed away in January, was 91 years old,” Compton said of his father. “I had to come down and put his name on the brick.”

Others who poured out of taverns near Wrigley when the game was over to shout, sing, cry, hug and take photographs also took a few seconds early Thursday to touch statues of Cubs greats Ron Santo, Ernie Banks, Billy Williams and broadcaster Harry Caray. It was an easy way to share the event with whose long careers with the Cubs came and went without even a trip to the Series.

“It is sad for past generations that missed it all together,” said Judy Pareti, who came from New York to stand outside the Murphy’s Bleachers tavern, which is in a building across the street from Wrigley . Her grandfather started the business that preceded Murphy’s called Ernie’s Bleachers Tavern.

“My great uncle went to every game with a scorecard and he died a few years ago,” she said. “He just missed all of this.”

She added: “It is sad we are never going to see them win for the first time ever again. We lost that.”

Of course, the Cubs didn’t make it easy. A seven-game series is always tense and the Cubs blew a 5-1 lead in the finale Wednesday night. When the Indians tied things up in the eighth inning, many feared yet another devastating chapter in the long history of Cubs heartbreak was on the way.

“When they tied it up it felt like it was over, they (the Cubs) had lost,” said Mike Dillon, a banking executive who drove to a tavern just outside Wrigley to be among other fans . “I couldn’t believe they won and even going home I had to turn on the news channels to make sure it actually happened.”

In the end, between 11:46 p.m. and 11:47 p.m. Central time, he and others went from being the longest-suffering fans in American sports to fans of the best team in baseball.

“It showed the fight, the grit, the up-and-down, the history of the team, the fans and the city,” said Donna Drepeau, a 50-year-old artist. “It had to be that way, it couldn’t come easy. That team showed Chicago what we are.”

The celebration of the Cubs’ first title in 108 years will kick off when team buses leave Wrigley Field at 10 a.m. for an official launch of the parade at 11 a.m. The procession will begin at the intersection of famed Michigan Avenue and Oak Street, heading south, then continue along Columbus Drive to Grant Park for a noon rally.

“The City of Chicago could not be more proud of the Cubs, and we are going to throw them — and their fans — a celebration worthy of the history the team made last night,” Mayor Rahm Emanuel said Thursday in a release.

“This is a celebration for past and present fans along with all the Cubs’ legends who never gave up hope,” he said.

The noon rally will be held at Grant Park’s Hutchinson Field. The celebration comes two days after the Cubs’ dramatic 8-7, extra-inning Game 7 victory in Cleveland.

About 2 million people attended a parade and rally when the NHL’s Chicago Blackhawks won the Stanley Cup in 2015, according to city estimates.

Fans attending the Cubs rally must pass through security screenings, city officials said. Closed water bottles will be allowed into the rally and food vendors will be on site. City officials said there will be “zero tolerance” for drinking.

The city’s 390,000 public-school students will be able to attend. Friday was already a scheduled day off for Chicago Public Schools.