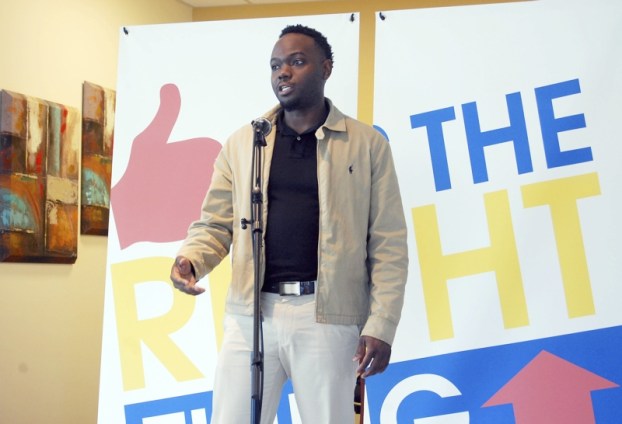 Amanda Raymond/Salisbury Post Larry Jones, program manager for Families First, said a former program participant approached him a few weeks ago to tell him how meaningful the program was for her. The Rowan County United Way has raised 94 percent of its $1.5 million goal for this year's campaign.

SALISBURY — With two weeks left in the campaign, the Rowan County United Way has raised almost 94 percent of its $1.5 million goal.

The United Way held its fourth report meeting at Cloninger Ford on Wednesday with many campaigns exceeding or coming close to meeting their goals.

The presidents, commercial 3, public employees and miscellaneous divisions have all exceeded their goals.

Penny Greer-Link, chair of the campaign, said the divisions can’t relax just yet.

“Five percent is attainable, but it’s not a given,” she said.

Greer-Link said people tend to give the most to agencies during the holidays, but agencies need funds year-round.

“We need to give now so our agencies can run all year long,” she said.

She added that she had faith that the divisions could meet the goal.

To help put a face to the agencies that the United Way provides funding to, Jeanne Sherril, executive director of Families First, brought Larry Jones, program manager, to speak to the crowd.

Jones said one of his former clients approached him about two weeks ago and said she missed his class and still remembered one of the stories he told during the Strengthening Families program.

“One of your stories, it touched me and it helped me turn some stuff around,” he recalled the woman saying.

He said he told a story about his father during the program, which is focused on strengthening parent-child relationships.

As a child, Jones would frequently try to sneak off to the pool with his friends.

“About the time we got to the pool, my dad would always catch me,” he said.

At the time, Jones said he thought his father was just being mean when he made him return home. He later realized his father only had his best interests at heart.

“All that time I was trying to go to the pool, I didn’t even know how to swim,” he said.

He would explain to the children that they might not understand right now why their parents do certain things, but it will make sense later.

“Just sharing that story with her, she was able to take something from it,” he said. “And I was glad that she did that.”

“All the things that we do, we could not do without the United Way,” she said.

The United Way campaign finale will be Nov. 16 at the J.F. Hurley YMCA at 828 Jake Alexander Blvd. W. at noon.

The cities of Concord and Kannapolis, and the town of Harrisburg announced today that customers of the municipalities’ water systems... read more