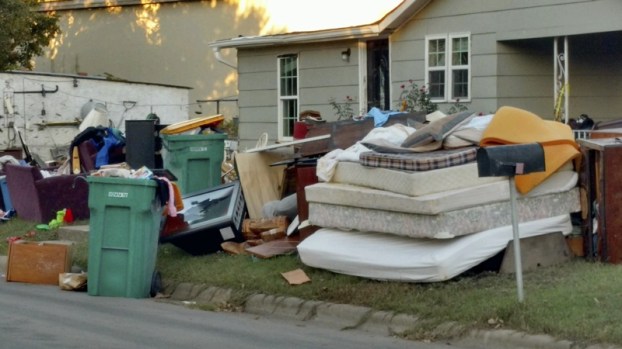 Brandon Linn, school resource officer at South Rowan High, has been to Lumberton twice to deliver supplies raised by the school and a local church. He said meeting the people left homeless by the floodwaters was "heartbreaking." “It’s so devastating knowing that these folks have nowhere to go. They can’t go to their home,” he said. Here, residents of Lumberton have piled everything destroyed by the flood by the side of the road. Submitted photo

Both schools have completed their initial drive, set for one week, and delivered the items to Lumberton.

“We ended up having multiple community donations coming in,” Sheets said.

Donators included Pittsburgh Steelers player Javon Hargrave and his father, Timothy Bates, a local pastor. Sheets said she also received a phone call from a woman in Rockwell whose husband and son were both truck drivers with plans to deliver donated goods to Lumberton. On Oct. 21, the son, Adam Kennerly, swung by the school to pick up the items.

Sheets said the class collected a variety of items, including water, canned goods, diapers and toiletries. But most of all, she’s proud of her students.

“I was really so surprised that something so small — just a conversation in the classroom — bloomed into something so large,” she said.

Between what was collected at the church and the school, Linn and others delivered 115 cases of water, numerous baby supplies and hygiene products. They also donated approximately 200 children’s coats and jackets and a number of clothing items. Linn said he was proud of Chrismon, and the Landis and China Grove community.

“The response from everyone within the community … has really, really been overwhelming and its been awesome,” Linn said.

But when he got to Lumberton, Linn said he was shocked. Robeson County was one of the hardest hit in the state, but Linn said that knowing that and seeing it were worlds apart.

In town, the houses are gutted. Furniture, mattresses, toys, sheetrock and drywall are piled up against the curb — everything too far gone to be salvaged. In some areas, Linn said, the smell of mold and mildew was “overwhelming.”

The people of Robeson County are put up in hotels or in Red Cross shelters, many of them with nowhere to go. Linn said he and six volunteers from his church spent Monday in Lumberton manning a food distribution center. The line was long as people queued up to receive cases of water and “big old trash bags” of food and other items.

Linn, who has children of his own, said it was especially heartbreaking to see families with infants or smaller children, and to see the look on the faces of the people there — people who are trying to figure out where to go, or what their next step will be.

“It’s so devastating knowing that these folks have nowhere to go. They can’t go to their home,” he said.

“It’s definitely not something you can clean up overnight and something that you can fix within a day,” Linn said of the damage.

It’s likely, he said, that the people of Robeson County will continue to need items until after the new year. Currently, the biggest needs are baby items: diapers, wipes, bottles, formula, pacifiers, baby wash and baby shampoo.

Linn plans to make another trip to Lumberton on Nov. 19 to deliver items.

“I would want someone to do the same for us here if something like that happened to us here,” Linn said. “So if there’s a need I’ll definitely be there.”

The cities of Concord and Kannapolis, and the town of Harrisburg announced today that customers of the municipalities’ water systems... read more