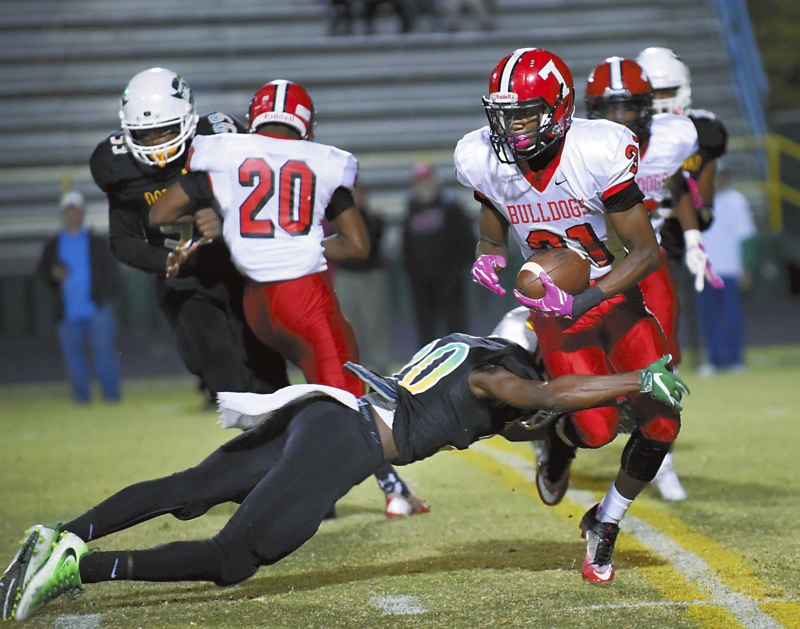 Prep football notebook for Week 11 …
Salisbury
•••
Salisbury’s offensive numbers have improved dramatically in the last three weeks. The Hornets have put up 831 rushing yards — 277 per game — in that span.
Hut Smith has been a standout blocker on the offensive line in recent games.
The Hornets will face a North Rowan team Friday that has been the toughest in the county to run on, so it will be interesting to see if Salisbury (3-7, 2-2 CCC) can keep it going.
A Salisbury upset of the CCC champs would mean the Hornets would tie for second place in the league.
•••
Cameron Horne’s late-season rampage continued in the Hornets’ 42-10 win against West Davidson on Friday. Horne had two receiving scores and a rushing score and has eight touchdowns in the last three weeks after having none in the first seven.
Horne’s TD catch on the final play of the first half proved a backbreaker for West Davidson.
•••
Marcus Corry did a little bit of everything for the Hornets, including scoring on specials teams on a fumbled kickoff.
•••
Versatile back Trell Baker is sixth in the county in rushing and fifth in receiving. He’s accounted for almost 800 yards.
•••
Tyquan Jones had his best game throwing the football on Friday and logged his first two touchdown passes of the season.
•••
Erixon Avila kicked six straight PATs.

North Rowan
In its last 2A season before heading back to 1A next fall, North Rowan clinched an outright league championship with Friday’s 33-14 win against Thomasville.
North got an assist from Lexington, which knocked off East Davidson and left four Central Carolina Conference teams tied for second at 2-2.
This marked the ninth outright conference title for the Cavaliers, who also finished alone at the top in 1962, 1982, 1985, 1993, 2000, 2010, 2013 and 2014. North has won championships in the North Piedmont and Yadkin Valley conferences as well as the Central Carolina.
North’s 1961, 1975, 1997, 2003 and 2005 teams were recognized as conference co-champs, and the 1969 and 1970 teams could claim mini crowns when the NPC was split into two divisions.
Some of North’s strongest playoff runs came from squads that weren’t conference champs — notably the 1992 (3A state runner-up), 1994 and 2001 teams.
•••
Backup QB Willis Mitchell made a loud hit covering a kickoff near the North sideline, a lick that drew the approval of fans at Eagle Stadium.
•••
Athletic Thomasville did an excellent job defending North Rowan’s bubble screens. Two passes to De’Andre Gray went for a very short gain and a loss.
•••
Corbin Smith didn’t have a big statistical night, but he threw his 15th and 16th TD passes. He’s had at least one touchdown pass in nine of North’s 10 games. The Davie game was the only one in which he was shut out.
•••
Junior Jacob Young booted his seventh field goal of the season and 13th of his career on Friday.
Young has accounted for 119 kicking points for the Cavaliers over the last three seasons.
North hasn’t gotten this sort of production from a kicker since Sandy Moore booted 42 PATs in 1994. The last North kicker to have six field goals in a season was John Patterson in 1991.
•••
Keith Carroll picked off his third pass to tie Chris Clodfelter for the team lead.

West Rowan
Kortez Weeks has 923 receiving yards after making five catches for 101 yards in a 21-3 win against Cox Mill that kept West Rowan tied for first place in the South Piedmont Conference with Concord and Robinson.
Weeks is closing on the fourth 1,000-yard receiving season by a Falcon. The feat has been accomplished previously by Chavis Cowan, Jon Crucitti and Jarvis Morgan.
Weeks just missed the 1,000 plateau last season. South Point held him to 42 yards in the season finale and he finished with 982.
•••
After his eighth consecutive 100-yard game, Jovon Quarles has 1,263 rushing yards for the season.
Quarles has 2,634 rushing yards for his career and is on the verge of moving into the top 20 all-time in Rowan County.
Quarles gained 4.1 yards per carry last season on his way to 720 yards. This season he’s at 6.3 per carry.
•••
Coach Joe Nixon praised interior defensive lineman Devin Turner for another outstanding game against Cox Mill. Turner was destructive enough to command double teams.
•••
Brandon Wallace, the drop end in West’s defensive scheme, performed well as a run-stopper and in pass coverage.
•••
West pushed its county-leading interception total to 19 with two more against Cox Mill. Cornerback Deyquan Byrd has seven, safety Malcolm Ingram has five and cornerback Paris Hillie and linebacker L.J. Robinson have three each.

Carson
In a 49-8 loss to surging Hickory Ridge, Carson (3-7, 2-6 SPC) continued to struggle.
The aerial game wasn’t kind to the Cougars, who threw five interceptions and allowed four passing touchdowns.
It was the sixth straight loss Carson after a promising 3-1 start.
The good news is it appears the Cougars still have a chance to get into the 3A playoffs if they can win their Senior Night finale against Cox Mill.
•••
Carson’s standouts against Hickory Ridge were linemen Blake Daniels and Matthew Beaver. Both played both ways.
Beaver had an interception.
•••
Rhine Barnette scored Carson’s lone TD on a 32-yard run. It was the first varsity TD for the senior. Barnette has 77 rushing yards in the past two weeks.
•••
Clayton Gilmore had his best game with the Cougars, snagging two passes for 65 yards.

East Rowan
The Mustangs (3-7, 2-6) stood 3-4 after shutting out Northwest Cabarrus, but the last three weeks have been tough ones. East has put up 85 points in those games, but it’s allowed a staggering 159, including last week’s 61-42 loss to Central Cabarrus.
•••
The 103 combined points scored in Friday’s contest were the most ever in a football game involving East Rowan.
There were 99 scored when East won 50-49 over Morganton Freedom in the 2014 state playoffs.
There were 98 scored when the Mustangs lost 59-39 to Statesville in 2012.
East’s record for scoring in a game is still 67 points by the very first East team in 1959 in a romp against Troy.
East has allowed 69 points twice in its history — against West Rowan in 2008 and against A.L. Brown in 2001.
•••
Central Cabarrus had nearly 800 yards of offense on Friday.
East allowed Central running back Demarcus Alexander to rush for 420 yards, six touchdowns and three two-point conversions.
That still wasn’t the most rushing yards allowed in a game by the Mustangs. B.J. Emmons rushed for 431 in East’s 50-49 win against Freedom in 2014.
•••
East’s big offensive night on Friday was partly due to a breakout performance by sophomore receiver Sam Wall, who had three touchdowns. Sophomore QB Justin Smith did a good job of getting the ball to him.
Senior Max Wall, Sam’s older brother, contributed three TDs and a two-point conversion.

South Rowan
South Rowan (1-9, 1-7 SPC) scored its lone TD in a 62-6 loss to Robinson on the “hitch-and-pitch” or hook-and-lateral play that Carson coach Joe Nixon has made famous.
Austin Chrismon, who went 80 yards, also scored on the same play last season — against Carson.
Chrismon is tied for fifth in the county with 50 points. That’s more than half of the Raiders’ total of 93.
•••
Marquis Rhyne, who has contributed in a lot of roles, saw some action at quarterback for the Raiders in the Robinson game.
•••
Since the euphoria of the win against Carson, the Raiders have had a tough time. They’ve allowed 149 points the past three weeks.

Davie County
Davie (9-1, 5-0 CPC) has its longest winning streak since 2004 — seven in a row — after owning the fourth quarter and winning on the road at Mount Tabor, 35-14.
An interception and long return by Mitchell Ijames to set up the go-ahead touchdown in the fourth quarter was the turning point in the game.
Davie also got a fumble recovery from Hite Merrifield and an interception by Broc Barnette and won the turnover battle with the Spartans, 3-0.
•••
Davie wasn’t very good as far as turnover margin in its five non-conference games, going minus-3 partly because of five lost fumbles in the Hopewell game.
But in its five CPC games, Davie has been a terrific plus-11 in turnover margin, losing five turnovers while taking the ball away 16 times.
•••
Cooper Wall caught his 11th TD pass of the season, and he missed two games. Quarterback Chris Reynolds, who missed the same two games as Wall (North Rowan and Hopewell) tossed his 19th and 20th TD passes and added his fifth rushing TD.

A.L. Brown
The Wonders didn’t play well in a 23-14 win against West Charlotte.
After opening the game with a scoring drive, they bogged down with penalties and turnovers, and the Lions (2-9) stayed in the ballgame down to the final minute.
The good news was that the Wonders (7-3, 3-2 MECKA) beat West Charlotte for the fourth straight year.
•••
A.L. Brown plays its final MECKA game on Friday at Hopewell, a team that surrendered 75 points to Vance last week, so the Wonders are headed for 8-3, and they’ll be able to drop the Mooresville loss and will be seeded as an 8-2 team for the small half of the 4A playoffs.
•••
In their four seasons in the MECKA, the Wonders are 15-10 (including 0-8 against Mallard Creek and Hough), with one left to play. The other two losses were one to Vance and one to Hopewell.
The MECKA was a seven-team league (including Robinson) for A.L. Brown’s first two seasons in 4A.
The Wonders finished fourth in 2013, fourth in 2014 and third in 2015.
They’re headed for a tie for third this season with the loser of this week’s Vance-Hough matchup.
A.L. Brown returns to 3A competition next season and also figures to return to its familiar role of annual contender for championships.