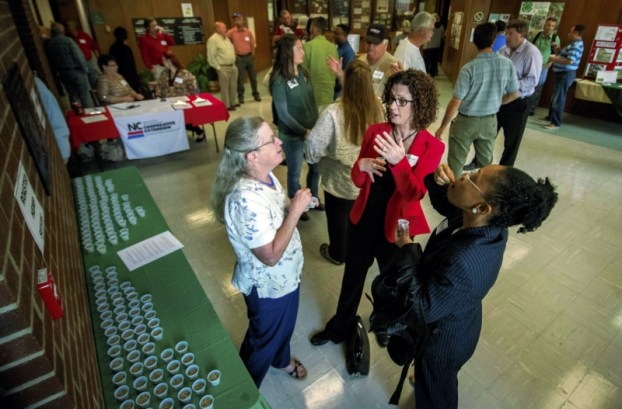 Helen Miller, left, and Michele Gachette, right, from Lomax Incubator Farm talk with Lori Pfister, center, of the N.C. Department of Agriculture during a break in a meeting held Wednesday on the growing interest in hemp and its many uses. The meeting, held at the Rowan County Cooperative Extension building on Old Concord Road drew a large crowd, most of them farmers exploring hemp as another crop they could include in their rotations. Jon C. Lakey/Salisbury Post A large group listens to Rockingham County Sheriff Sam Page speak about the law enforcement side during a discussion Wednesday about hemp production, which is currently illegal without a permit. Jon C. Lakey/Salisbury Post

SALISBURY — Much remains unclear about its future, but farmers flocked to a Wednesday workshop about North Carolina’s budding hemp industry.

Organized by Asheboro-based Founder’s Hemp, the workshop attracted nearly 150 people from across the state. Many were farmers interested in growing the plant. Founder’s Hemp plans to build a hemp processing facility in Asheboro and hopes to attract enough interested farmers to grow 200 acres of hemp in 2017.

Wednesday’s forum brought university researchers, state agriculture officials, a sheriff and farmers to talk about hemp farming in North Carolina, which became legal earlier this year. However, there’s no licensing process set up for farmers to grow the crop. Without a license, farmers can’t grow.

Legal hemp farming in North Carolina is so new that the regulatory body created to oversee the plant met for the first time on Tuesday, hours before the start of the workshop.

“Everybody is kind of jumping in blind at this point,” said Andy Corriher, who farms in the Atwell area of Rowan. “We’re gonna kind of feel our way in and just see what happens.”

Corriher and other row-crop farmers are reeling from a second straight year of lackluster farming returns. In 2015, drought sharply reduced yields for farmers of traditional crops such as corn and soybeans. In 2016, precipitation provided a slightly better outlook for local farmers, but it wasn’t the year many were hoping for.

“Farmers want to keep their livelihood, but they have to have money to keep that livelihood,” Cutting said. “If you’re getting $2 per bushel, that’s not even paying your expenses.”

Much of the academic research farmers use for crops such as corn or soybeans doesn’t exist yet, she said. Speakers during Wednesday’s workshop stressed that there may be a years of negative returns before hemp becomes a viable crop, but the novelty factor seemed to be one of multiple factors that attracted attendees.

“When you think about hemp, people often think about rope and marijuana and often it’s marijuana before rope,” said Founder’s Hemp President Bob Crumley, who also serves as chair of the N.C. Industrial Hemp Association. “The truth is that if a farmer is growing five acres of hemp and you smoke all five acres, you won’t get high. You might get other stuff, but you won’t get high.”

In addition to the basics of hemp farming, much of Wednesday’s event served as an introductory course about the plant. Crumley spoke about health benefits associated with hemp seeds. Hemp contains a much lower percentage than marijuana of a chemical called tetrahydrocannabinol — commonly shortened to THC — which creates psychoactive effects. Hemp contains a higher percentage than marijuana of a chemical called cannabidol — shortened to CBD — which is thought to have a wide array of medical applications and a lack of side effects.

Crumley’s company plans to use its Asheboro processing facility to produce hemp seeds for human consumption, oils that could be used on salads or in shampoos and other products. Crumley said his company doesn’t initially plan to produce fiber from hemp plants.

Saunders said Founder’s Hemp plans to contract with a minimum of 20 farmers to produce 200 acres. That amounts to each farmer growing a maximum of 10 acres.

“If you’re thinking about growing and think it’s going to be easy, go do something else,” said Kentucky hemp farmer Tom Hutchens, who will plant his fourth crop in 2017.

Angela Post, a professor and small grains specialist at N.C. State University, warned farmers that hemp is “a wonderful plant, but it’s not a magical plant.” Farmers will need to carefully analyze growth like any other crop.

There are also law enforcement questions lingering about hemp’s legalization.

There are, perhaps, more questions than answers about hemp in North Carolina, but farmers on Wednesday were high on the potential boon to the state’s agriculture industry.

“You know, anytime you can cover your costs a little better and spread your risks out some, it’s something you’ve got to look at,” Corriher said. “I think hemp is going to fit in really well in a rotation.”