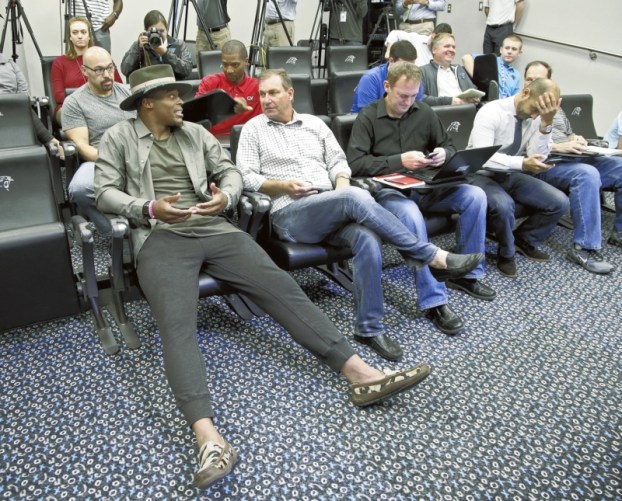 Carolina Panthers' Cam Newton, left, talks to the media before a news conference in Charlotte, N.C., Wednesday, Nov. 2, 2016. Newton spoke briefly about meeting with NFL commissioner Roger Goodell after complaining that he didn't feel officials were protecting him in the pocket. (AP Photo/Chuck Burton)

CHARLOTTE (AP) — Panthers quarterback Cam Newton’s concerns about “illegal hits” have been heard by the NFL — and action has been taken.

A person familiar with the situation says Arizona Cardinals defensive tackle Calais Campbell has been fined $18,000 for his hit on Newton in Sunday’s game. The person spoke to The Associated Press Wednesday on condition of anonymity because the league does not publicly announce fines.

Newton had a phone conversation with NFL Commissioner Roger Goodell on Tuesday about his perspective on the hits he takes from defensive players while in the pocket.

Newton said after Sunday’s game he didn’t feel protected in the pocket after no flag was thrown when Campbell crashed into his legs as he was releasing the football.

Dean Blandino, the NFL’s senior vice president of officiating, said on NFL Network that Campbell should have been penalized for roughing the passer.

“You can see Campbell coming up the middle and he’s going to hit Cam in the knee area or below; forcible contact, driving through with the shoulder — that’s a foul for roughing the passer,” Blandino said on the show. “We want our referees to call that. We’ll address that with the crews going forward.”

Before the AP learned of Campbell’s fine, Newton was asked if he thinks his concerns will be enforced on the field in the future and the quarterback replied, “We’ll wait to see Sunday and moving forward.”

The Panthers visit the Rams on Sunday.

Newton didn’t provide details of his talk with Goodell, saying it was a “confidential conversation.”

Newton did say he raised many of the same issues he had on Sunday when he blasted officials in his postgame news conference following Carolina’s 30-20 win over Arizona. Newton said at the time he didn’t feel safe in the pocket because officials were allowing defenders to take illegal shots at him.

Newton said he just wants to be treated like other NFL quarterbacks regardless of his size.

“Illegal hits for me start in the pocket,” Newton said Wednesday. “It is funny how a lot of people have a lot to say. I know when I am running the football I am on my own. I understand that. I’m not a dummy or oblivious to the fact that I run the football more than any quarterback who has ever played this game. I mean, duh. I’m fine with that.

Newton said after his call with the commissioner he had a positive vibe.

“Anytime you’re being heard, obviously, with a person of his magnitude, I respect that,” Newton said. “I just wanted to be efficient of his time and make sure I got my point across. I believe I did. … We ended on good terms. We started on good terms as well. Nothing changes.”

Panthers coach Ron Rivera has supported Newton, comparing him to Shaquille O’Neal in that he doesn’t get the calls because he’s bigger than other players at his position.

“At the end of the day, it’s not about special treatment,” Rivera said. “It’s about being treated the same.”

During his first four seasons in the league, Newton benefited from 22 roughing-the-passer penalties against the opposition, according to NFLpenalties.com. However, since the start of the 2015 season no defender has been called for roughing the passer on hits to Newton — at least not a penalty that cost the opponent yards.

The Denver Broncos were flagged once in Week 1, but the penalty was offset because Newton was flagged for intentional grounding on the same play.

Rivera suggested earlier in the week the NFL may want to consider adding an eighth referee on the field next season to help protect the quarterback. He also suggested that teams should be allowed to challenge what they deem as an illegal hit on the quarterback.

When asked if it is more difficult to call roughing the passer penalties with a quarterback like Newton or Pittsburgh’s Ben Roethlisberger, Blandino replied, “It’s the posture that’s going to dictate the protection. We want our referees to be as consistent as possible, and quarterbacks have to understand that you get more protection in the pocket in a passing posture.

“And when you leave the pocket and you’re in a running posture, you’re going to lose protections.”

From staff reports Davie County advanced to the third round in the girls tennis 4A state playoffs for the first... read more