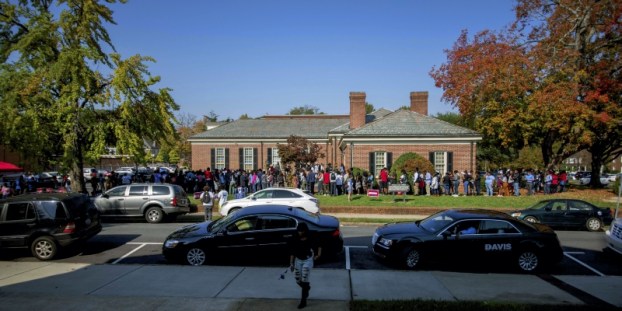 Hundreds of students from Livingstone College marched from campus to the early voting location at the Rowan Public Library in downtown Salisbury in November 2016. Jon C. Lakey/Salisbury Post

March on the polls: Livingstone students walk to vote SALISBURY — The grounds of the Rowan Public Library in Salisbury are flooded with students. They gather in the shade or hop in a line that wraps around the building, waiting to be let in to vote. One of the members of the crowd raises a megaphone to his lips and calls out, “Who are you with?”

Wednesday morning hundreds of Livingstone students marched off their college campus on West Monroe Street and walked up to the nearest polling place — the library on West Fisher Street. The crowd mostly kept to the sidewalk, but traffic still slowed as the march crossed the street on South Fulton. Students were upbeat, laughing and chatting as they walked. For many, today is a mark of progress.

“I feel like we came a long way from where we used to be,” Deja Troy, a freshman at Livingstone, said.

Devinae Haywood, a sophomore and the community development chair for the School Government Association, said her family always taught her about the importance of voting.

“Our ancestors did this for us,” she said of the right to vote, “and how dare we as the African-American community not get out there and vote.”

She also said she felt it was important for the school to come together as one.

For De’Tarvia Parrish today is also about history, in more ways than one — Parrish is a professor of history at Livingstone, and said that her African-American history class has been talking about the history of voting all week.

While she watched the students queue up to enter the poll, Parrish said she was thinking about Thomas Mundy Peterson. Peterson was the first African-American to cast a vote after the 15th Amendment was ratified. He voted on March 31, 1870, at a polling place in New Jersey.

Parrish has been walking with Livingstone since the college held its first march nearly 10 years ago. Dr. Jimmy Jenkins, then the school’s new president, told staff he wanted every Livingstone student registered to vote, and wanted to find a way for the school to encourage them to exercise that right. Back then, they walked to the County Board of Elections office on West Innes Street.

It’s an initiative that’s carried through for nearly a decade.

“One thing that I am excited about is that Livingstone is encouraging and equipping students to exercise their constitutional rights,” Parrish said.

Student Mickayla Cushman said that the marches really encourage students to register and get involved in the political process — something they might not do on their own.

The march was a coordinated effort between the School Government Association, staff and other student leaders on campus, Kenya Glover, Student Government Association president said. Staff and students have been pushing voting since school began, holding events to get students registered and information sessions about the different political parties.

It’s Glover’s first presidential election, and she said she, and other students, were excited. The march has become a school tradition, and Glover said that many students will wait to vote just so that they can walk to the polls with their fellow students.

“This is a really critical election for lots of students,” she said.

And students said it wasn’t just important politically, but personally as well.

“Once you get out and vote it makes you look at the world differently,” Cushman said.

By Josh Bergeron josh.bergeron@salisburypost.com SALISBURY — Much remains unclear about its future, but farmers flocked to a Wednesday workshop about North... read more