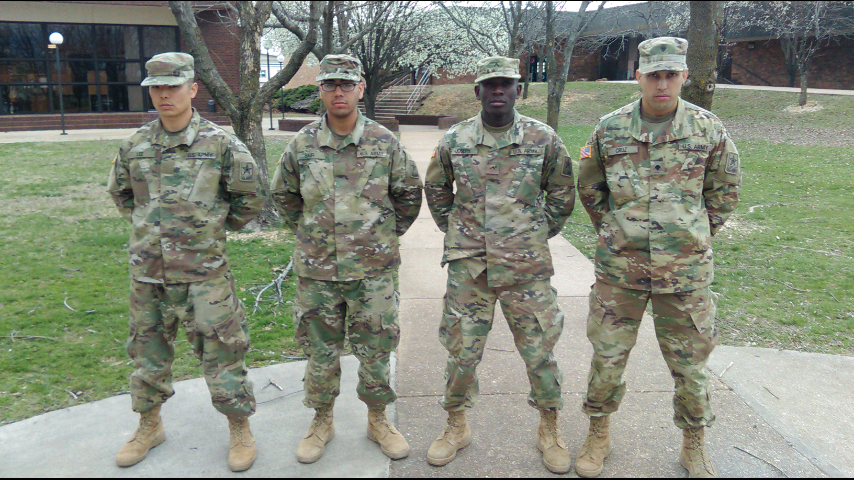 Belony Joseph, center, came to the U.S. in 2010 as a refugee from Haiti. He has since joined the U.S. Army Nationa Guard and earned his citizenship. Submitted photo

SALISBURY — In a scant six years, Catawba College student-athlete Belony Joseph has transformed himself from a non-English speaking Haitian refugee, to a college student, a member of the U.S. Army National Guard and now a U.S. citizen. He says his determination and inner strength are the reasons he was able to shape his uncertain future into one that he will determine.

“Always be yourself. Focus on the positive,” he shares with his characteristic gleaming smile. “Know where you want to go and which path you want to take, and knowing that, realize that your success is not based on what other people think about you and perceive about you. And, always work hard to reach your goals.”

Joseph’s journey to citizenship began in 2010 when he arrived as a 16-year-old refugee in Texas following the devastating Haitian earthquake that leveled much in his country. He spoke no English when he arrived, only Creole and French. This young stranger in a strange land was picked up at the airport when he arrived by a host family that he would also live with during his first year in the U.S.

His first year was difficult for him, but he shares facts about it without complaint. “I started in eighth grade in Texas and was just there listening, trying to learn the language. I was not able to properly speak English and could not talk to people.”

His smile carried him through this lonely time.

His ninth grade year brought him to Concord, N.C., where a second host family associated with his church, The Way (El Camino), took him in. He enrolled at Central Cabarrus High School and finished high school there. His soccer playing at Central Cabarrus helped pave his way to be recruited as a student-athlete at Catawba.

Joseph took the 2016 spring semester off from Catawba to join the U.S. Army National Guard. He completed boot camp at Fort Leonard Wood in Missouri and says the experience was mentally and physically challenging, with the mental challenge being the toughest for him.

“I didn’t know what to expect, so everything that happened was a surprise. I didn’t have access to the internet, the phone and I was unable to contact family and friends.”

While at boot camp, he thought a lot about becoming a U.S. citizen. He made real progress toward realizing that goal when the Army supplied him with study materials to help him prepare to take the citizenship test.

After 10 weeks at boot camp, he went to tech school, or Advanced Instructional Training (AIT), to be a construction engineer and hone his skills operating construction equipment. Ironically, Joseph had familiarity with some construction equipment because he had held summer construction jobs since graduating from high school. He successfully completed his AIT and returned home to North Carolina in May to spend another summer working in construction. In June, he was interviewed and answered questions to become a U.S. citizen.

Several months later, in late September, Joseph joined over 50 people from 34 different countries in Charlotte at the offices of the U.S. Citizenship and Immigration Services to take the oath of citizenship. He went alone, just as he was when he arrived in the U.S. back in 2010, and he smiles when he recalls that he was the youngest one in that group to take the oath.

“You gotta do what you gotta do,” he jokes, remembering, and he shares his memento of that big, life-changing occasion: a shaky photo taken by a fellow participant after the ceremony.

Joseph shared the news of his citizenship with his family in Haiti almost a month after it happened. His mother did not cry as he had thought she might. Instead, she shared her happiness with him via phone.

“‘Well, Belo (her nickname for her youngest son) maybe later after you graduate from college and get a job, you can bring me there. Because I will be really happy to come and get to know your new country,’” Joseph said, quoting his mother’s comments.

Although he had spoken to his family since Hurricane Matthew struck, learning that his family and the town were spared extreme damage, his call to Haiti in late October was the first where he shared his citizenship news with them. The few folks he had told on Catawba’s campus and among his friends in Charlotte told him “good job” and “congratulations.”

“Most of the people in Haiti would make the same choice I did — to become a U.S. citizen in the blink of an eye and not think twice about it,” he said.

Joseph received a certificate of citizenship after the ceremony and turned over the green card that he had carried for years. He was told he can apply for his U.S. passport anytime.

Back at Catawba, the soccer team he plays on is nearing the end of its fall season. His grades are good and his long term career goal to become a physician’s assistant is still intact. He will report for National Guard service one weekend a month and for two weeks each summer for the next five years. And his citizenship? It will last his lifetime.

“I was always patriotic because of respect,” he says. “You come to a new place, you have to follow the rules and be respectful. But, I’m more patriotic now. I’m proud that I’m an American citizen. I understand what people before me had to do for the flag of this country.”