Carving up some fun at Trinity Oaks 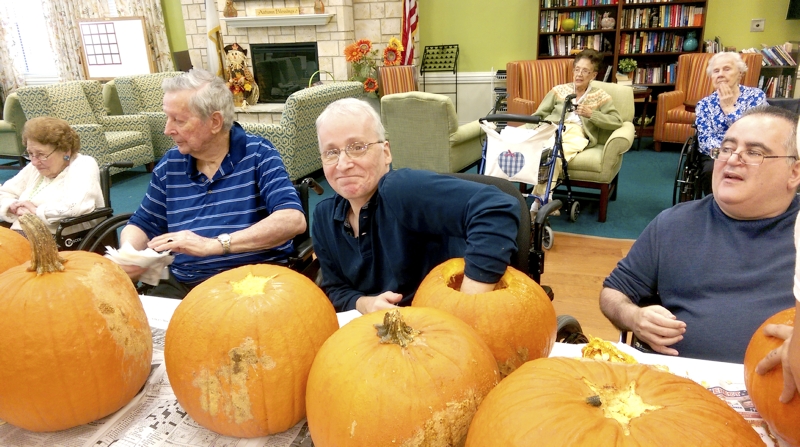 I had a blast going along with Food Lion’s DC 10 Charitable and Community Events team to help carve, gut and decorate pumpkins for the residents of Trinity Oaks Retirement Community this past Thursday.

Food Lion’s team of volunteers had already visited Trinity Oaks earlier in the week to help the residents paint the small pumpkins, but were right back Thursday with a truckload of big carving pumpkins.

Each Food Lion volunteer teamed up with one or two residents to help them draw, trace and carve their designs, as the tough, thick skin of the big vegetables can sometimes be difficult to slice through.

But first, there was the messy “gutting” of the huge pumpkins to remove all of the seeds and pulp from the inside. My first time trying a pumpkin so large, I struggled in vain to clean it all out, and I saw my two residents throwing glances at each other. They think I didn’t hear their stifled snickering behind me. Oh, but I did.

After no less than 30 minutes had passed of me struggling to clean out the insides, I threw up my slimy, pumpkin covered hands in frustration, wet specks flying everywhere. “No matter how much spaghetti guts I pull out, there’s always more in there!”

My two residents burst into laughter, unable to contain themselves any longer. “We’ll just say that’s good enough,” one said.

Another resident, Cindy, loved gutting the gelatinous gourds and we happily obliged her. “Here Cindy, would you like to do this one too?” Food Lion’s Ashley Page asks. Cindy’s eyes got wide, and she was smiling and nodding furiously, beckoning for the next pumpkin.

A little while later and a few tables over, I was failing miserably at helping Maria Sanns and her resident trace a kitten holding a small pumpkin. Seemed simple and easy enough. But after four tries on three pumpkin surfaces, my services were understandably, no longer needed.

Another resident was in need of assistance and I was glad to finally get to show off my carving skills. I used to whittle a little bit here and there, so I got this.

“And … there she goes!” I removed one last sliver of rind from my masterpiece and stepped back proudly. My elaborately carved kitty cat fell forward, leaving just a large empty hole.

“Another pumpkin, Kendell?” Grocery Shipping Manager Jim Burris just couldn’t keep the jokes in as I sat the latest mangled creation beside my previous ones. “Look, that’s gonna have to come out of your check!”

His jokes were met with howls and snickers from residents and volunteers alike and I chuckled as I gladly let volunteer George Cedillo take over, as his drawing skills seemed to be a whole lot better than mine.

I acquiesced to just cleaning and walked among the tables passing out wet napkins and scraping the “guts” into a bucket.

“Let’s put the seeds in a separate bucket” Life Enrichment & Volunteer Coordinator Lynn Barringer reminded the group. “You can clean them later, put them in the oven and roast them.”

“Mmm, that sounds good! I remember when momma used to bake them growing up. …” A resident began to recall a fond memory of hers and I smiled as I cleaned, just listening to residents and volunteers alike share their similar memories and experiences.

The interactions seemed so genuine and natural, I was honestly taken aback. It was as if everyone laughing and talking had known one another for years. I waited a while and then asked a few members of the Food Lion team why they were enjoying it so much.

“I came and volunteered because a lot of good stuff has come my way,” Cedillo answered. “I have a good job and healthy kids. I really felt like it was time for me to give back a little and Food Lion offered a chance this week.”

He paused to wipe some seeds off of his sleeve. “At first it was awkward, it being my first time volunteering like this, but I warmed up really fast with the way the residents smiled at me. I can tell that they love that we are here spending time with them, just painting pumpkins and chit- chatting.”

Team member Kevin Vaughn’s laughter filled the room as he worked diligently, knees bent and eyes squinting, trying to carve a nose in the shape of a triangle. I asked George if he had any part in his friend, Kevin, volunteering for the first time.

“Of course I got my boy to come with me!” he beamed. “I’m trying to lead by example and so far, it seems to be working.”

When the other group members echoed the same sentiment, I had to ask how this event came to fruition. “Well, Food Lion has been organizing events like this at Trinity Oaks for years,” Lynn replied while washing utensils at the sink. “Ashley Page reached out about six months ago to coordinate this with me and then she compiled a team of willing sponsors and volunteers.”

I wondered if the giddiness I was witnessing among the volunteers was the famed “helpers high,” a state of euphoria that is often reported by those engaging in charitable actions or events. It didn’t seem that much of a stretch.

In a survey by researchers from Harvard University, it was revealed that those who gave money or time were 42 percent more likely to be happy than those who didn’t give. The more I explored it, the more I learned that health benefits of volunteering are not just restricted to the volunteers themselves. There is a lot of research and data that proves healthy support systems that volunteers are a part of can speed up recovery and boost self-esteem and overall well-being for those living with or recovering from any serious or debilitating health condition.

“I’m going to continue to come back and invite others as well” Cedillo promised. “And to anyone who hasn’t volunteered, I would tell them that it is a very humbling experience and a great way to give back to our community, so please give it a try.”