Candidates clash at school board forum 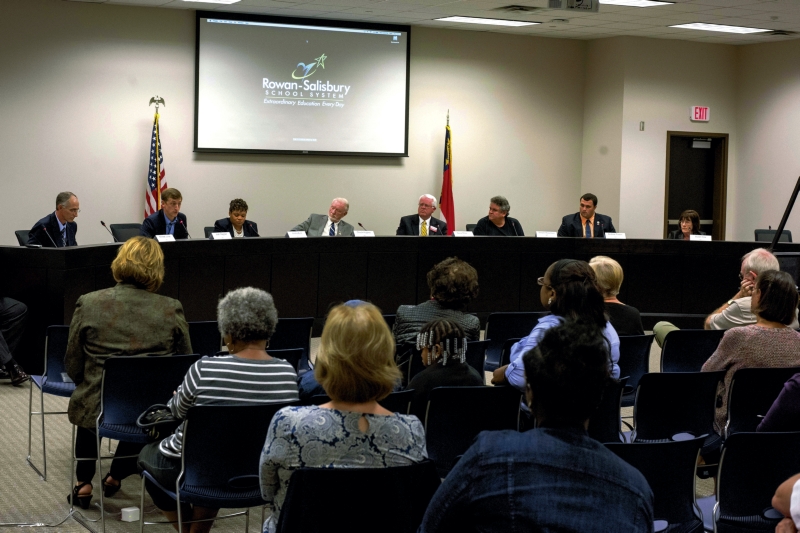 Eight candidates for three seats on the Rowan-Salisbury Board of Education took part in a forum Wednesday. Jon C. Lakey/Salisbury Post

Editor’s note: This story has been updated to correctly state that, at a May 9 board meeting, Chuck Hughes voted against allowing students to carry pepper spray; and that Mike Julian denied he had been for closing Salisbury High.

SALISBURY — Gene Miller and Chuck Hughes crossed swords at Wednesday night’s Chamber of Commerce forum for Board of Education candidates, momentarily disrupting the meeting, which is the first that all eight candidates have attended.

During opening remarks at the forum, held at the Wallace Educational Forum, Miller threw the first stone. Miller used his introduction to highlight controversial statements Hughes has made — referencing the board’s too-hot-to-handle discussion of a policy allowing pepper spray.

Miller did not acknowledge Alisha Byrd, who is also running for the board’s Salisbury seat.

The first question, posed by moderator Phil Kirk, asked candidates if they thought the school system has played a positive or negative role in community development.

The majority of candidates implied that the answer was both. Hughes, however, used his designated minute to respond to Miller’s opening comments.

“Some of the comments and falsehoods made by wannabe candidates, they have no place here either,” he said.

Hughes bit back against Miller’s accusation that he had not initially been concerned with school safety and had opposed the central office, and said that he was the first to vote against the pepper spray policy when it was brought up for review after national outcry. During a May 9 board meeting, Hughes spoke in favor of the policy but ultimately voted against it, the only opponent in the 5-1 vote.

“If I really thought that Mr. Miller thought those things were true, my feelings would be hurt,” he said. “But they’re just words of a desperate candidate.”

Kirk stepped in and asked candidates to respond to jabs during their closing remarks.

“I would like us to stay focused on the questions,” he said.

After that, the forum proceeded smoothly.

In addition to Byrd, Hughes and Miller vying for the school board’s Salisbury seat, Mike Julian is challenging current board Chairman Josh Wagner for the East seat, while board member Susan Cox is being challenged by Andrew Poston and Dr. Rob Robertson for the Southeast seat.

Candidates were asked what should be done with the large number of old school buildings owned by the system.

Miller advocated looking for additional funding to “fix up” buildings. He said he does not advocate for getting rid of any existing structure.

“They need some TLC,” he said.

Robertson also advocated for keeping the buildings in case of a swell in population. Poston again said that the system should in 2020 ask the county commissioners if bond money could be used to address capital needs, but Cox said that the money — if approved by the county — was “already spoken for.”

Cox said she was in favor of forming a committee of community members to come up with creative solutions. Byrd agreed, and Julian suggested working with the state, county commissioners and the community to find a solution.

“Our local, small, elementary, community schools are the heart and soul of this county,” Julian said.

Wagner said he was not on the record for supporting closing any schools, and struck out at Julian, bringing up a comment from a previous forum where Julian said he would be in favor of closing Salisbury High School. In his closing remarks Julian denied that he had supported shuttering the school, and only meant that it was something that needed to be looked at.

During the Sept. 21 forum hosted by the Rowan County Tea Party, Julian, in response to a question asking what candidates thought of prior discussions to close the school and if they would consider reopening the discussion, said he wouldn’t be opposed to the closure.

Candidates were also asked about whether schools placed too much emphasis on a four-year degree.

Hughes said that community colleges used to prepare students to go into a vocational field, but now they, too, are preparing students to achieve a four-year degree.

“That’s a waste of time and energy,” he said.

Candidates were also asked about their position on the district’s one-to-one initiative, whether the system should renew its contract with Apple, Inc. in the spring and whether the board should ask the county commissioners for funding to provide additional supplements for teachers.

The evening forum was the last held for Board of Education candidates before Tuesday’s election. It was hosted by the Rowan County Chamber of Commerce, Catawba College, the Salisbury Post and WSAT. A video of the forum will be viewable on Channel 16 until the election, Kirk said.