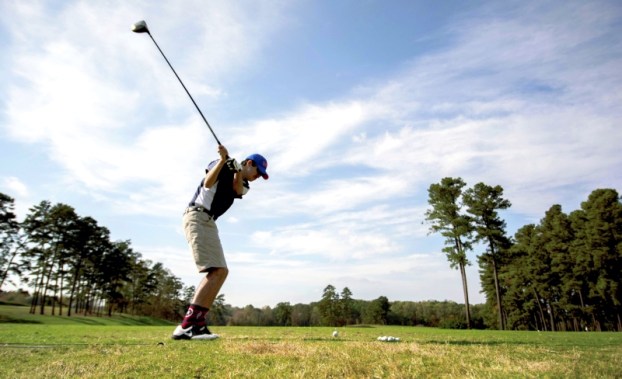 Tyler Davis practices his swing at The Club at Irish Creek’s driving range in Kannapolis. Davis, a Special Olympics athlete, and his unified partner Chase Baldwin, were chosen for the 17th Annual Special Olympics North America Golf Championship in September. The tournament was held at the PGA Golf Club in Port St. Lucie, Florida. Davis was excited to return home with a gold medal for his efforts. Jon C. Lakey/Salisbury Post Dawn Davis laughs as she talks about her son Tyler Davis at the driving range at The Club at Irish Creek golf course in Kannapolis. Tyler came to the golf course to practice his golf techniques. Jon C. Lakey/Salisbury Post

KANNAPOLIS — Tyler Davis has a happy place. His heaven on earth is complete with rolling green hills, sand dunes and a few scattered trees.

The 21-year-old goes to his place of solace at least 4 times a week, where he swings a 9 iron.
Davis, who goes by the nickname, Ty, has been golfing since he was 11. He recently won gold in this year’s Special Olympics. He won the national title alongside unified partner Chase Baldwin.
Ty learned the sport of golf from his father, Ted, who died in 2012 after a short battle with cancer. Before his father’s death, Tyler’s paternal grandfather and paternal grandmother died that same year.
His father was an avid golfer and Ty even uses his father’s clubs and Florida Gators golf bag.
It was a difficult time for Ty, his mother Dawn said, but he found his happiness in golf.
Beyond golf
Ty was diagnosed at the age of 3 with autism. Since he is autistic, though high-functioning, it does often take some time for him to learn.
“They told me he would never talk. But at 4 he started putting words together. They said he would not be able to learn,” Dawn said.
Dawn rejected doctors’ expectations of her son and began attending classes meant for special education instructors. She learned how to work beyond therapists and instructors and began to tailor learning specifically to her son.

Sometimes children who are autistic will flap their hands or rock as a type of visual stimulation, she explained. Dawn said she worked with Ty early on to do something else with his hands.

“He would sit on his hands,” she said.

It was also important to Dawn that Ty understand and learn social cues such as observing other people’s personal space.

“I would tell him to give people an arm’s length distance,” she said demonstrating.

Ty attended Baudhuin Oral School in Florida and participated in his high school drama department. He won the role of Samuel Clemens in a school play where he narrated the production, he said.

Ty is no stranger to the stage and was even asked to join one of his favorite country musicians — Darrell Harwood — on stage at a recent summer concert.

He described wearing his “cowboy hat” and singing all of the words to all of the songs.

“This was his dream,” Dawn said.

When asked who sings a particular country music song, Ty immediately comes up with the name. But he was a little embarrassed at his mother’s insistence on naming the album, too.

“No mom, not the album,” he quickly said.

He usually can recall any country music song, artist and album with complete accuracy, Dawn said.

Like any proud mother, Dawn rattled off all of the classes he takes at school. Ty attends Rowan-Cabarrus Community College’s Skills, Opportunity, Awareness, Readiness (S.O.A.R.) program, which is designed specifically for adults with intellectual disabilities.

He is in his third year in the program where he studies math, reading, vocabulary, spelling and computer skills.

Champion
Ty and Chase participated in the three-day competition, which was held at the PGA Golf Club in Port St. Lucie, Fla.
This year marked the 17th year for the Special Olympics golf championship event, which began Sept. 29. The two participated in the level 2 golf that is 9 hole alternate shot. The pair were chosen after winning a gold medal at the Special Olympics North Carolina Fall Tournament last year.
Now that Ty has won the level 2 this year, he’ll be eligible for competition in the level 4, without assistance of a unified partner. He isn’t new to this level. In fact, he competed in his native Florida without a partner.
His family — including aunts, uncles and cousins — attended the tournament to watch Ty play, which he said made him nervous.
“Chase said to pretend they are not there,” Ty said.
Ty wore his Captain America socks and Chase wore his Batman socks to the tournament.
He practices an hour four to five days a week. He generally practices at home, but also at the Club at Irish Creek in Kannapolis.
His stepfather, Will Revels, and mother have placed a practice area at their home and will soon add to that a backyard putting green.
Will works with Ty using a golf app, which tracks golf clubs, distances on every hole, has a personal scorecard and offers tips.
Like many golf champions, Ty watches other golfers as a way to learn and perfect his own skills. His favorite golf pro is Tiger Woods.
Sheriff Kevin Auten heard about Ty and collected a couple hundred golf balls for him to use to practice, Dawn said.
The Special Olympics golf program began in 1988 with the assistance of The PGA of America and USGA. Since its inception, both associations contribute to the growth of the program with grassroots training, tournament administration, and national program financial support. Currently, there are over 23,000 Special Olympics North America athletes who participate in golf competition.
There are nearly 40,000 adults and children with intellectual disabilities who take part in year-round sports training and competition.
Contact reporter Shavonne Walker at 704-797-4253.
You Might Like

By Rebecca Rider rebecca.rider@salisburypost.com LANDIS — Friday’s half day meant that seventh graders at Corriher-Lipe Middle School got to see how... read more