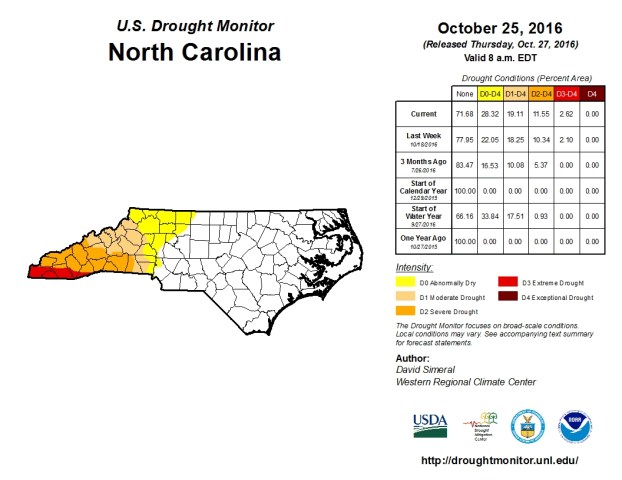 The cities of Concord and Kannapolis, and the town of Harrisburg announced today that customers of the municipalities’ water systems should now follow Level 1 water use restrictions, due to regional drought conditions.

These restrictions are for the municipalities of Concord, Kannapolis, Harrisburg, Landis and Midland.

The LIP is the regional drought management plan that major water users in the basin use to share responsibility and set priorities to conserve the limited water supply. Although not public water suppliers in the Catawba River Basin, Concord, Kannapolis and Harrisburg follow the group’s drought stages as part of the Interbasin Transfer Agreement.

Irrigation creates the single largest demand for water during spring, summer and fall months. Research shows that properly maintained lawns only need 1 inch of water per week to thrive, and it is best to water during evening and early morning hours.

Level 1 voluntary restrictions means the following activities are permitted, but users are encouraged to limit:

Concord, Kannapolis and Harrisburg are committed to environmentally sustainable water use practices 365 days a year during normal conditions and periods of drought.

On August 1, the CW-DMAG entered into the Stage 0 LIP drought watch. Dry conditions and above-average temperatures continued worsening, leading to this Stage 1 announcement. Continued decline of the basin’s drought triggers could prompt a Stage 2 LIP drought level in the future, with mandatory water use restrictions being instituted by local water suppliers.

The cities and town thank their customers for reducing demand and assisting with extending limited water supplies during drought conditions. Businesses and residents continue to demonstrate leadership in water conservation and environmental protection.

The aforementioned water use restrictions do not apply to those customers using wells or ponds for irrigation purposes. However, all users are encouraged to remain diligent in their conservation efforts regardless of the water source.

By Shavonne Walker shavonne.walker@salisburypost.com SALISBURY — Before leading investigators to the remains of Erica Lynn Parsons, her adoptive father admitted to abuse... read more