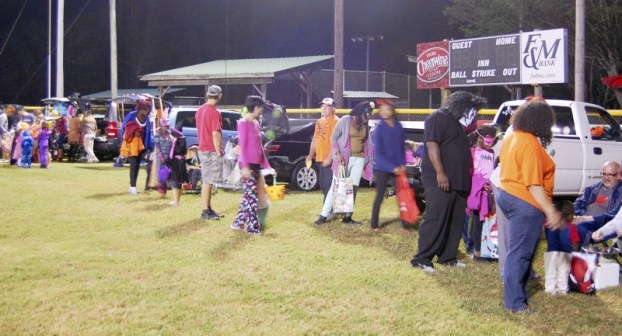 SPENCER — LaShaunda Durham said her family doesn’t usually celebrate Halloween, but her kids made her bring them out to the Eighth Street Ball Park to see their friends.

She said she liked the event because it was safer and more convenient than going door to door, especially since not everyone participates in giving out candy.

“It’s all in one location,” she said.

Dozens of families had the same idea. Superheroes and princesses mingled with witches and monsters at Home Run Halloween, a trunk or treat event hosted by the Spencer Cal Ripken League, on Monday.

About 20 vehicles lined the outfield with trunks open wide, their owners offering children candy. The Ellis Cross Country and Spencer fire departments also brought their firetrucks to the event.

Wes Thompson, sponsorship and fundraising manager for the league, previously said he wanted the event to bring the community together and create an atmosphere of fellowship.

Salei Seisay, Durham’s daughter, said she saw many of her friends from school.

“I like it because I get to see most of my friends,” she said, dressed as Abbey Bominable, the daughter of the Abominable Snowman from the Monster High doll franchise.

North Rowan Elementary School brought a school bus to the event, with the inside filled with Halloween decorations. Kids went through the bus and jumped out of the back, receiving candy at the end.

Katherine Bryant, dressed as Gru from the movie “Despicable Me,” and teachers and counselors from North Rowan Elementary School, dressed as Minions, decorated the inside of the bus and helped the kids land safely on the ground.

Bryant said she wanted the community and local children to see her and her employees in a friendly way, as well as supporting the league.

“These are our kids,” Bryant said.

Salifu Seisay, Salei’s twin brother dressed as a ninja, said he liked jumping out of the bus.

“…I got candy for just jumping,” he said, adding that he thought the event was fun and safe.

The children and parents walked down the line of vehicles, collecting candy as they went. Some vehicles actually ran out of candy an hour before the event was scheduled to end.

“There’s a lot more people than I expected,” Nikki Parker, one of the people giving out candy, said. She and boyfriend Chris Brown were dressed as Ash and Pikachu from the television series “Pokémon.”

Brown said he enjoyed the event because it gave kids one place to come and collect candy.

“It pulls the neighborhood together in one location,” he said.

Bryant said it seemed like people were having a good time.

“This is nothing but a fun, good night,” she said.

SPENCER — The Phenomenal Women of God will be hosting the second annual Every Step Counts Walk for Cancer on... read more