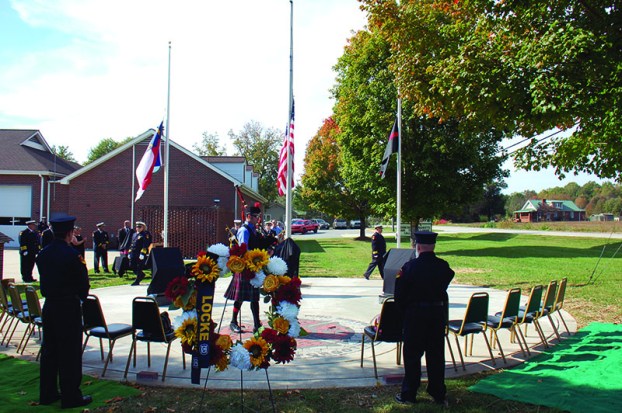 One monument honors service and is dedicated to the work and devotion of all firefighters and emergency medical service personnel who have put on the Locke Fire Department uniform. It also recognizes all the individuals in the community who have supported the department, now in its 60th year.

The second monument pays tribute to Locke’s fire chiefs — past, present and future. Names will be added as chiefs change over the years. So far, there have been only five Locke chiefs: Earl Davis, Greer Goodman, Narvie Lee Bonds, Jason Brown and Rusty Alexander, who is chief today.

Alexander unveiled the third monument, which stands between the other two. This “Last Call” memorial features a firefighter’s turnout gear in bronze, and it remembers two Locke firefighters — Capt. James Shue and Lt. Chris Phillips — who died in the line of duty.

Plenty of emotion was tied to the Last Call monument Sunday, as the families of each man were on hand for Sunday’s solemn dedication.

Nancy Shue and Elizabeth Phillips sat next to empty chairs set aside for their late husbands. Each chair held a picture of the fallen firefighter along with his Locke Fire Department helmet.

“I think it’s beautiful,” Elizabeth Phillips said later as she kneeled close to the middle memorial with her 5-year-old daughter, Lillie. “It’s an extremely beautiful way to honor our boys.”

Elizabeth Phillips and Nancy Shue were members of the committee that decided on the design and elements of the overall memorial, which includes the three black monuments, three flagpoles and a large, brick insignia of Locke Fire Department that says, “In honor of all who served … Never to be forgotten.”

“I love it,” Nancy Shue said of the final product, which took about three years to conceptualize, finance and finish. Shue attended Sunday’s ceremony with her sons, Todd and Jamie, their wives and all the grandchildren.

Seeing the Locke firefighters together, as they were Sunday, always makes it an emotional time for her, Shue said.

“It is a brotherhood,” she added. “They’re a tight group of guys and women. When they get together like this, it brings the emotions out.”

James Shue, who worked as an engineer at Rowan Memorial Hospital and volunteered for the Locke Fire Department, was killed Dec. 14, 1995, when the engine he was driving overturned on the way to a fire call.

Phillips was one of the original six men whom Locke hired to provide 24-hour coverage from the main station.

Phillips’ father, Carl, said the memorial to his son and Shue is “just outstanding.” Chris Phillips went by the nickname “Cowboy,” something which stuck to him when he was playing junior varsity football at West Davidson High, Carl said.

Some kids on the team started wearing big belt buckles and “awfully expensive boots,” Carl Phillips said, and the “Cowboy” image and name stuck with Chris the rest of his life.

Before joining Locke, Chris Phillips had been an assistant chief with Churchland and also had served with the Lexington Fire Department. As a junior firefighter at age 15, he joined the Tyro Fire Department.

“As he was not old enough to drive at the time,” one eulogy said, “whenever a call was dispatched, he would leave his home about 500 yards from the department while still pulling on his turnout gear and sprint at full run … often times beating others there.

“He was driven; his passion for his calling had no end.”

Nancy Shue said her husband, James, had a light, funny side that did not go unnoticed by his comrades in the Locke Fire Department. The Department bestowed Red Bucket Awards to the firefighters who happened to  do something crazy or off the wall during the year.

Emma A. Hunter, a nurse at the hospital where James had worked, said after his death that Shue had a way of turning “a bad evening into a pleasant one.”

“Often he would come and tell us a joke or just rub our backs,” Hunter said. “Before you knew it, you would be laughing and feeling better.”

For Locke, Shue had served as president of the board and chairman of the steering committee during the construction of Station 63.

Both Shue and Phillips are remembered at the National Fallen Firefighters Memorial in Emmitsburg, Md. North Carolina has 130 firefighters memorialized there, and of those six are from Rowan County — four from Salisbury and two from Locke.

“As I was thinking about how I would describe Jim and Chris,” said David Linker, president of the Locke board, “two things stuck in my mind. They both had big smiles and a giving heart.”

Linker said the memorial project started out to honor Shue and Phillips, but as the committee discussed it, members also wanted to honor all the firefighters, EMS personnel and community volunteers.

“We realized there would be no way to identify all the people who had supported the fire department during its 60 years of existence,” Linker said, “so the committee decided to honor all who have served Locke.”

Funds came from individual donations, business contributions and two insurance companies, which carry a clause as part of their policies that provide for paying part of a cost of an insured firefighter’s memorial.

“May this memorial be a place of peace, reflection and remembrance for both the community and Locke Township Fire Department,” Parrish said.

Along with Engine 624, Locke firefighters Bradley McKnight, Jonathan McCulloh, Steven Dale and Jacob Lingle recently returned from the Lumberton and Allenton areas where they performed water rescues and helped in providing fire protection. They came back Thursday after a 16-day deployment.

On Jan. 13, 1956, Locke Fire Department was formed with 170 charter members. Today, the department covers 14 percent of Rowan County’s population, has more than 60 volunteers and a paid staff of seven people.

Tommy Eller and Ronnie Smith provided this photograph and helped in identifying the management team from Ketner’s Supermarkets in the... read more