What a hoot: At Elaine’s house, every day is Owl-O-Ween 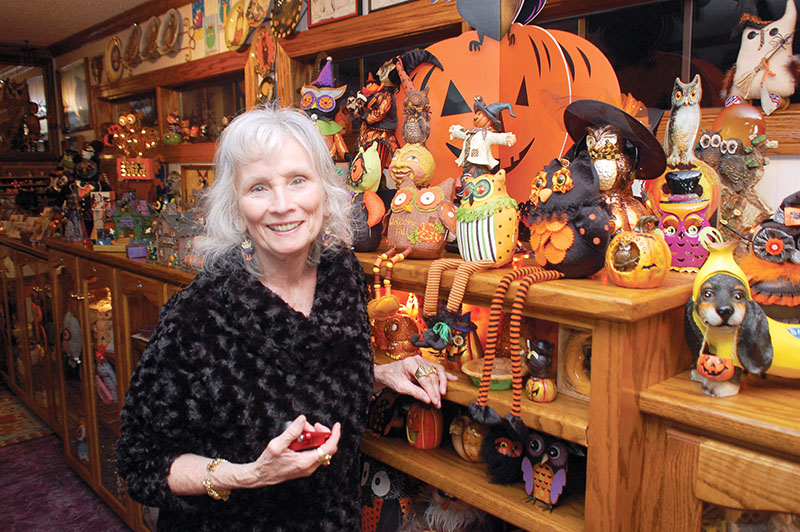 Mark Wineka/Salisbury Post Elaine Howle, pronounced 'Owl,' stands next to some of the 12,000-plus owls that fill most every space in her China Grove home.

CHINA GROVE — It started 50 years ago when she married a man named Joel Howle and realized she might be spending the rest of her life telling people how to say “Howle.”

It’s pronounced “Owl,” and as a way of welcoming Elaine Howle to the family, her mother-in-law, Lois Howle, presented her with the first one, a sort of fierce-looking ceramic owl that Elaine named “Lois.”

Well, the marriage back in 1966 didn’t last a year, but Elaine Howle kept her name. She also continued collecting owls. As with “Lois,” she named the first 300 before it became pretty much impossible to keep up.

Maybe it’s some kind of hoarding, this madness, but Howle now has by her estimation more than 12,000 owls filling her small home in China Grove.

Last week, Howle invited all her friends, family, Civitan buddies and veterans she has helped through the years to her Eighth Annual “Owl-O-Ween.” Close to 200 people have been coming in recent years.

There were orange drinks, candy corn and orange-and-black cookies at this drop-in, but Owl-O-Ween is pretty much people walking into every room of Elaine’s house and muttering words such as “amazing” and “unbelievable.”

It’s an owl museum. An owl hall of fame. An aviary for owls.

Wearing her owl pajama pants and owl bracelets, Elaine talked a mile a minute — that’s not unusual — and she was asked, does she know the story behind every owl in every room?

They hang from the ceilings and walls. They flutter in the breeze of her carport.  They are neatly displayed in lawyer bookcases, on shelves and in hutches and cabinets. Drawers are filled with compartments, and the compartments are populated with owls.

In her bedroom, Elaine has three drawers alone that hold her owl sleepwear.

Owls are carved into her front and side wooden doors.

They all have owls on them.

“She is just amazing at all of this,” said Jamie Morris-Haley, who sheepishly acknowledged that she collects — she calls it “rescuing” — Humpty Dumpties.

Morris-Haley has upwards of 6,000 Humpty-Dumpty-inspired things at her house, but they are not all on display, and she said they do not come close to the owl mania at Elaine’s house.

Howle’s bathroom has an owl shower curtain and owl wallpaper. Terry Taylor said Elaine used to have a four-post bed in her master bedroom, but she replaced it with a single bed so she would have more room for owl stuff.

There are owl rugs, blankets, pillows and chairs.

Taylor noted that a lot of the inside windows have been covered up owl pictures and other owl things stuck to the walls.

“And every one of them has a story,” Morris-Haley said.

Or, again, Elaine will make one up.

Howle pulls down an owl she bought at the Louvre art museum in Paris and remembers it was the first time she used a credit card in Europe. Her “oldest” owls might be some 1882 prints Brenda Zimmerman picked up for her once, she said.

Elaine paid $140 for an owl carved by Ron Sides that she bought on Easy Street in Salisbury.

Her favorite owl is one done by her late son, Mark, that is framed and hangs in a bedroom. He created it in the third grade, Elaine said, and she remembers Mark telling her how he would have preferred making a rocket.

And there are all the owls people have brought to her as gifts over the years.

Lois Sechler recently picked up an owl Christmas ornament for her at a Cracker Barrel store. Retired professor Bethany Sinnott, who became friends with Elaine when Howle was an older student at Catawba College, dropped in at the Owl-O-Ween with a beautiful glass owl she had picked up on a recent trip to Northern Italy.

“I’m sure you needed one more owl to complete your collection,” Sinnott told her friend.

Howle immediately trotted off to the cabinet where her new owl would have to go.

Howle, now 70, is a two-tour veteran of Desert Storm, having served in the 846th Transportation Co. of the Army Reserve. She worked in payroll at the former Fiber Industries plant in Salisbury for 37.5 years, but for the past nine years she has been working for veterans in Rowan County.

She is known as much for her advocacy for vets as she is for owls.

Howle’s mother, Audrey Chapman, lives in a nice addition to Elaine’s house. Chapman held a seat of honor at Owl-O-Ween and greeted many of the friends roaming through. As for all the owls around her, Audrey acknowledged it was “more than I want to take care of and dust.”

The owl has served Elaine well in helping people remember how to pronounce her name when they see her again. Folks automatically want to call her “Howell,” and Elaine said she will never stop correcting the offenders.

Howle, who is still collecting, said the 12,000-plus number is only her best estimation of how many owls she has.

“I can’t get anybody to count them for me,” she said.

Somebody at Owl-O-Ween said whatever number you come up with, add two to it.