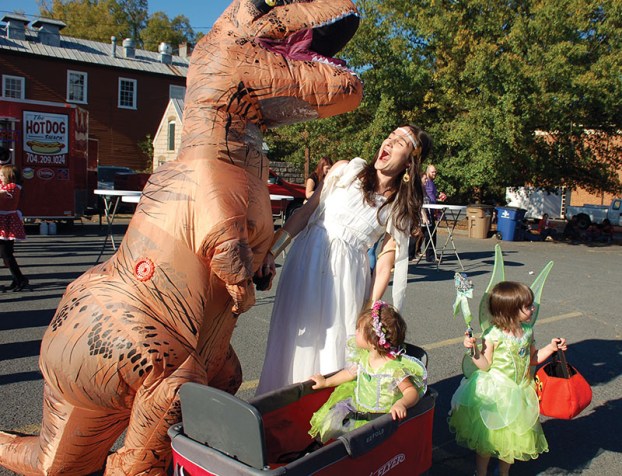 Mark Wineka/Salisbury Post The Badilla family included father Rafael as a T-rex, mom Erin as a Greek goddess and daughters Sienna and Mia as Tinkerbell fairies.

SALISBURY — Even though her son A.J. was walking around with his head in a jar Saturday afternoon, Nicole Goodman said there was a lot to like about the Downtown Halloween Fun Fest.

“Just the atmosphere,” she said. “It’s Salisbury. It’s family. It’s fun. It’s safe. And there is a lot of stuff for kids to do.”

But back to A.J. His Halloween costume had him dressed in a trench coat, and he was headless. Well, not exactly headless. He was holding a big glass jar next to his chest, and his head was inside the jar.

“The store-bought costumes are getting kind of old,” dad Phillip Goodman said.

A.J. was sweating up a storm inside the hot costume, but the family hoped it was going to be worth it once the costume contest started later in the day.

“We figure he’ll get the ‘Most Creative,'” Nicole said. “(Meanwhile) we’ll keep him in the shade.”

The event is known for its many games, the hay bale maze, dance performances, costume contest, trolley rides and hayrides. It combines with a one-hour window when kids can go trick-or-treating from store to store downtown.

“I like that it’s safe, it’s a safe environment, for one,” said Pauline Young, who waited for her daughters to walk through the maze of hay bales. “They get to be around other kids, too.”

For the maze, a photo booth and a downtown hayride, the city trucked in 400 hay bales. For $5, kids collected a lot of candy and played many games, including cornhole, ring toss, archery shots, bowling, golf, basketball, juggling, crawling through an obstacle course, Frisbee throws and more.

Parents and grandparents got into the act, dressing up along with their kids.

The city put out two large blackboards on which kids could write Halloween messages and names. A good-sized section of the parking lot was taped off to provide a dance floor for many young performers.

“It’s safe, it gets the community together,” L.A. Alexander said of Halloween Fun Fest. “We need more events where we can bond together.”

Patrick Brandt said he has been bringing his children for five or six years. His 9-year-old daughter, Hayden, was dressed as a Snapchat filter, a clue that costumes have changed over the years. She had just finished bowling and collecting some candy.

“They love just coming to play the games and seeing everybody’s costumes,” Patrick said. “They love the maze, all the events and the trolley ride.”

Kaley Pfister of Granite Quarry was dressed as The Flash and waiting in line for face-painting. Her mom, Beth, said Halloween Fun Fest is affordable, offers a lot of variety and seems to bring people together.

“You have to get out when it’s beautiful, right?”

Phin Mixson stopped to catch juggling pins thrown to him by Pete Bogle. His mom, Ann, said the event was family-oriented.

“I love how it’s all about the community — everything we like about not living in Charlotte,” Ann Mixson said.

Some adults went the extra mile with their costumes. Dan Willard, a tall dude, came as a lion dressed in a Santa costume. He called himself “Santa Claws.”

Rafael Badilla was dressed in a full-length tyrannosaurus rex costume. His wife, Sienna, was a Greek Goddess, while their young daughters were lovely Tinkerbells.

“He was dad of the year tonight — or the month,” Sienna said of her husband and his costume. “I’ll give him the month.”

Kayla Smyth’s family brought a circus kind of theme with them to Halloween Fun Fest. Son Leland was a clown; daughter Ava, a tiger; daughter Elliana, an elephant; and Kayla herself, a lion.

“I like to dress up with them,” Kayla said.

The family planned to trick-or-treat among the downtown stores. “It’s safe and nice and during the day,” Kayla said.

Susan Church was waiting with Taylor Church (Wonder Woman) and Shelby Norton (zombie) to take off on a downtown hayride, which was being pulled over city streets by a John Deere tractor.

Taylor’s Wonder Woman had a butterfly painted on her face.

“I’m not sure how the butterfly goes with the costume,” Susan Church said.

Remember A.J. Goodman, the kid with his head in the jar? Nicole Goodman said dad Phillip actually had a much scarier costume Saturday. He was wearing a University of North Carolina Tar Heels T-shirt.

1. Besides the early-voting site at the Rowan County Board of Elections (West End Plaza), how many other early-voting locations... read more