‘Wading into the unknown’: How teachers are approaching the 2016 election 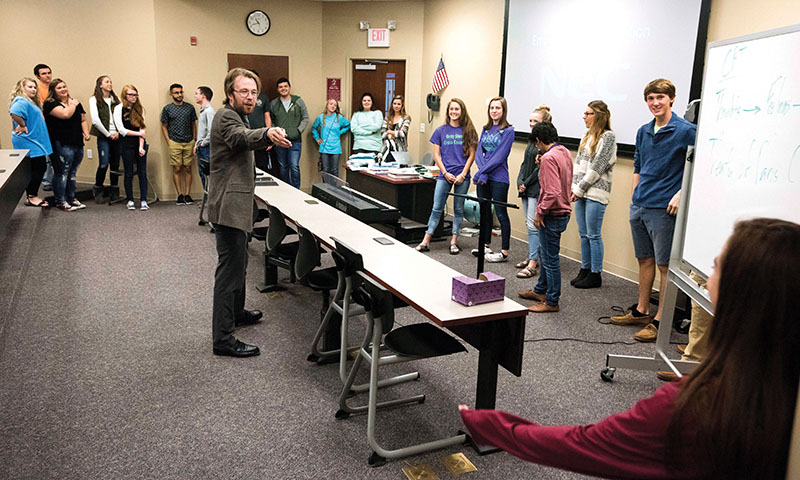 MISENHEIMER — Students in Wesley Dry’s honors elections class face off across a table during an in-class exercise. As a timer ticks down, one side of the table argues their point while the other listens. When the clock hits zero the listeners repeat the argument, and then it’s their turn.

When Dry calls time, he congratulates the class on a civil discussion.

“You’re already better than the presidential candidates,” he tells them jokingly.

Presidential elections are events that create a bridge between the classroom and the real world. Students learn about the Electoral College, hold mock debates in class and watch their daily lessons play out on a national stage. But as the 2016 presidential elections have become increasingly vitriolic, peppered with accusations and scandals, schools across the country have spoken up about the numerous pitfalls and difficulties of letting those topics loose in a classroom.

Civil rights advocacy organization the Southern Poverty Law Center recently released a national report where teachers laid out their concerns — which range from sensitive subjects such as sexual assault to rising anxiety among minority students to increased incidents of bullying.

However, local educators say that, so far, they haven’t seen these issues. Dry, a second-year history teacher at Gray Stone Day School, said he thought that the difficult nature of some of the topics didn’t justify shying away from them.

“So if (the students are) exposed to slightly mature content — as in, you know, obviously, adults not behaving at their very best — does that justify just pretending that an incredibly vital part of our democracy doesn’t exist?” he wondered.

But Dry runs his class like a “watered down political science course” and all of the students are high school juniors or seniors. He said he might feel differently if he was teaching students in middle school, or younger.

Across the county line, Jessica Goodman, a middle school social studies teacher at Salisbury Academy, has made a different choice.

This quarter, Goodman has been running an exploratory class on the election — but she and her students have kept away from the details of the contentious election, and have focused instead on the process.

“This election cycle is difficult to teach if you focus on the candidates, but I felt like that’s not where our time and attention was best spent, anyway,” Goodman wrote in an e-mail.

Instead, the students have been studying the electoral process and the ins-and-outs of how a candidate becomes president. The class is even hosting a school-wide election on Nov. 8. The decision that hangs in the balance? The theme for field day. It’s been well received by students.

“It makes me happy because sometimes when I watch the news I’m not sure what the world is coming to,” Goodman said.

But that doesn’t mean she shies away from the topic, either. Whispers of the election still seep into the classroom, visible in a student’s note, “Make school great again,” scrawled on the white board, and in idle chatter. As they made plans for Election Day, the students wondered aloud who each candidate would vote for.

“Will Hillary vote for Trump?” They teased.

“I’m sure they vote for themselves,” Goodman told them.

If discussion of the candidates is relevant, and doesn’t devolve into “who’s right and who’s wrong,” Goodman said she’ll talk about it in her social studies classes.

But the hardest thing for local teachers tussling with the election is remaining neutral.

“It’s very cut and dry. There are very few independents in the classroom,” Carl Muolo, an eighth-grade social studies teacher at China Grove Middle School said of his students.

And when election scandals reared their heads, students pestered him.

“Is it true?” They wanted to know.

Muolo said that it’s been hard to be objective with some of the issues — but it brings up a good opportunity to talk about sourcing. Mostly, Muolo tackles the problem by making students fill out sheets listing each candidate’s stance on issues — each point must be backed by facts and direct quotes from the candidates themselves.

“So that makes it easy if you do that,” he said.

At Gray Stone, students in Dry’s class were split pretty evenly between Trump and Hillary supporters in a beginning-of-the year poll.

“I have to wade very cautiously and make sure I’m not making the environment partisan or uncomfortable or a place they don’t feel like they can discuss their points of view,” Dry said.

Dry has gotten pretty good at playing devil’s advocate or ensuring that class readings and discussions are balanced. And when a student asks a question that could lead to a heated argument, he tries to get them to reframe the idea, think about it and redirects them back to the topic.

So far, he said, he and the students have successfully, and peacefully, navigated the waters of the 2016 election.

The class has watched all three presidential debates, and finished up the final debate Tuesday. Dry paused the video at key moments to explain policy or ask students their thoughts. When Clinton pointed out that Trump criticized former President Ronald Reagan in the past, Dry stopped the video and asked why that might be significant.

When the video resumed, the class watched the back and forth between the candidates intently, breaking into brief laughter when Trump leaned down to the microphone and said, “Such a nasty woman.”

Afterwards, the students discuss some of the highlights — including Trump’s hint that he may not accept the results of the election. Some students interpreted the comment as the nominee keeping his momentum and keeping the possibility of winning in the forefront of his mind. Others disagreed.

“It is kind of just so unappealing for him to say that he … won’t accept the results of the election,” student Rachel Moon said. “He wants to be the president of the United States but he doesn’t trust the citizens of the United States to make the decision. …Why do you want to govern people you don’t even trust? It kind of makes him seem like he’s leaning towards something that we don’t want America to be.”

But others saw it as caution, and a refusal to blindly accept an outcome and being cautious in case the Clinton campaign tries to pull some strings.

“He wouldn’t agree that it was fair — there’s been so much cheating and lying in the Hillary campaign,” student Sam Lanning said.

While some are worried about how students would handle sexual assault allegations or the e-mail scandal in a class discussion setting, Dry said they really only come up when mentioned in one of the debates and were handled with “a certain degree of disgust” by most students.

But it’s led to some interesting discussions, he said — primarily on the topic of fact checking. According to Dry, many people aren’t paying attention to fact checkers in the debate, and Dry said his students are no exception.

“We’re in this sort of post-Google political culture. That there’s now just so much information out there that you can always find some source, some spin to argue your particular perspective,” he said.

The class, the first such that Gray Stone has offered, has brought some surprises with it. Dry remembers one day where he asked his students how many were genuinely enthusiastic about one of the candidates.

“And out of 25 students I had three raise their hand,” he said.

If the class was used as a generalized sample applied to the entire country, that means that only about 12 percent of the populace are excited about this election, Dry said.

“The remaining 88 percent are all arguing about why somebody else should hate the opposing candidate more. …That seemed very peculiar to me, how you could have such ambivalence towards the candidate but such passion and anger about the policies,” Dry said.

It means he has to tread more carefully than ever. But this election season has also been a struggle. Dry said that one day, about midway through the class, he threw up his hands and said, “History and political science is all about being able to look at the past for evidence that contextualizes our present. Well, what happens if that’s just not doing it for this election? What happens if this is all new?”

While Dry said he sees “soft echoes” of past elections and issues in the 2016 election, “this does all seem to be very new.” Everything, from the “theatrical” nature of the election to the way voters are aligning their views and values with their political party — a shift that was last seen in the 1980s during Reagan’s campaign — is very new.

But that makes it exciting.

“That fascinates me, even though it means I’m wading into the unknown,” he said.

And the students meet him in the middle. They, as a class, discuss the history of political realignments in elections, pausing on the major shifts in the elections of 1800, 1860 and 1980. They also discuss how personality might play a role in a person’s politics.

“If you’re trying to explain the vitriol and the unpleasant feelings and why we tend to morph facts to suit our perspective, part of it is that our political ideology … is part of our personality. It’s who we are,” Dry said.

The political identity of students in Dry’s class is “still in flux,” he said.

‘Not just one year’

The still-forming opinions of her students is one reason Goodman chose not to focus on the firestorm election.

Goodman said that, in middle school, most students are walking into school with the opinions of their parents — they are still developing their own. She wants her students to understand the way voting can impact the future, and the long-term effect of an election.

“Not just one year where the media’s going crazy,” she said.

Much of the rhetoric she hears is frustration at the candidates themselves — and hopes that by learning about the process, and getting excited about it, her students can change that.

“If these kids can grow up and realize that they can be an active part of our government, maybe that doesn’t happen,” she said.