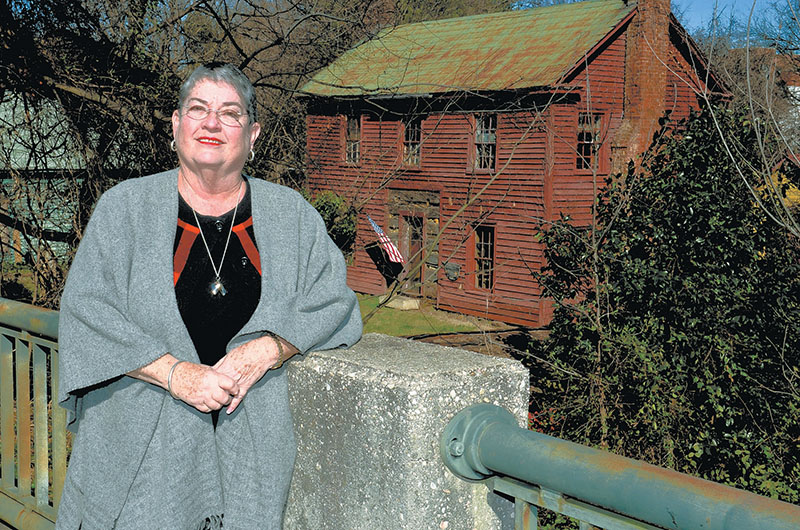 Photo courtesy of Donnie Moose/Miller Davis Agency Kaye Brown Hirst, retired executive director of Rowan Museum Inc., stands on East Bank Street bridge in front of the Salisbury Confederate Prison guardhouse, part of the half block of properties Clyde, the artist and antiques collector, has donated to the museum.

SALISBURY — How do you thank someone for a phenomenal gift that will keep on giving?

Quite a cliché, but simple to answer. Let me explain. Clyde, the Salisbury artist, has a vision. A beautiful one: a vision that has his properties on East Bank Street housing a Civil War Museum for our area, a museum in the prison guardhouse, a great Civil War site (very close to downtown) — in all, a regional destination attraction.

For Christmas 2015, Clyde gifted the Rowan Museum with half a block of old Salisbury, lined with one very late 18th-century house and four 19th-century houses, along with the guardhouse of the infamous Salisbury Confederate War Prison. As the only remaining structure from the prison, the guardhouse is of major historic importance, as is the land. Soldiers died here. It is hallowed ground. It is also important to the county as part of tourism development. The Civil War continues to be a popular tourism draw nationally and locally.

The prison was established in 1861, shortly after North Carolina seceded from the Union. It was originally an empty cotton factory located near the main line railroad. By November 1864, 10,000 men were crowded into the facility, designed for 2,500. About 5,000 Union soldiers are said to be buried in trenches, with no marked graves, in a nearby cornfield which became the National Cemetery. Eighteen trenches are marked with headstones and foot stones, but there is no record of the exact location of where each soldier was placed.

Clyde, an artist, antiques dealer and museum supporter who goes by that one name, has a longtime interest in Salisbury history. He is a visionary.

Along with his gift of land and houses, the property also contains gardens and buildings, well houses and a cemetery.

It’s already a site that the museum uses for education in our Summer History Camp programs. Campers from elementary through middle school spend time in the houses, writing about life in an earlier Salisbury, digging in the gardens, planting seeds, harvesting produce, doing chores on the property, chasing chickens, gathering eggs, plowing with a push plow, mowing with a rotary push mower, peeling and drying apples, and generally getting dirty and learning about a simpler, though harder, life.

The campers tour the guardhouse and study prison life and write about the time period. They find, see and use artifacts of a totally different and earlier century. And they go back to their classrooms during the school year and talk about it, as they have learned so much because they saw it and they touched it!

The Rowan Museum is thrilled with the gift and the possibilities to expand programming that it brings. Such a wonderful asset and so close to downtown, it can and will be developed to become a strong Civil War History Center. With room for a museum on the site, and enhancement of the property, it will become an even stronger educational resource. School classes, history camps, re-enactors, and descendants of prisoners and guards alike will be visiting this site.

Rowan Museum receives many visitors from out of town and state who come here to visit and research the War Between the States. They are often disheartened to learn there is no Civil War site here, other than the National Cemetery. We do give them the address of the guardhouse so they can drive by and see the house and the N.C. Civil War Trail marker. If they are fortunate enough, they might find Clyde and actually tour the house, but that’s only on Thursdays when he sells antiques or by chance.

Clyde does have lifetime rights to live there. That’s great, because it is going to take the museum some time to plan and implement the vision.

The Rowan Museum did this with Rowan’s oldest house in the late 1950s when it acquired the 1766 Old Stone House from the Brown-Fisher Family Association. There was a great vision then as well, but it took many years and a lot of planning for the museum to finally open the house as a historical site in 1966.

It’s our vision, too: to take what Clyde has begun and to study and find a way to develop the property further into a site of which the community can be so proud. It will take time to think about, to design and plan, to raise funds and to implement all that this piece of property can perpetuate for the future.

I am confident that the board of directors and the staff of the Rowan Museum will do a wonderful job with this most important piece of historic property.

So, how do you thank someone for a phenomenal gift that will keep on giving to our posterity? You simply say, “Thank you, Clyde,” and you work hard to make it happen!

Kaye Brown Hirst retired in May after serving as executive director of Rowan Museum for 20 years, and she is still retained by the museum as a consultant.