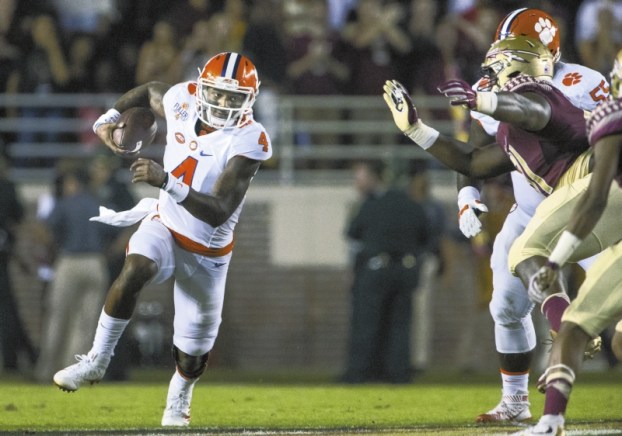 The junior completed 27 of 43 passes for 378 yards with two touchdowns and a pair of interceptions. His 34-yard pass to Jordan Leggett with 2:02 remaining gave Clemson the lead. Watson also had 52 yards rushing on 17 carries, and Leggett had 122 yards on five receptions.

It is the second straight game that Watson has had over 400 yards of offense against Florida State. He had 404 yards last year in a 23-13 victory. He is the first quarterback to beat Florida State in consecutive seasons since Oklahoma’s Landry Jones in 2010-11.

Wayne Gallman had 82 yards rushing and a pair of touchdowns to help the Tigers (8-0, 5-0 Atlantic Coast Conference) extended their regular-season winning streak to 22 games.

The Seminoles (5-3, 2-3) fell short despite Dalvin Cook’s career-high four touchdowns. The junior had 136 of his 169 yards in the second half and had two touchdown runs of 40-plus yards.

Clemson: The Tigers were 2 of 2 on the fourth down but were 6 of 15 in converting on third down. Clemson was 14 of 27 on third downs in its past two games going into Saturday.

Florida State: Pass protection remains an issue. Francois was sacked six times and took at least four hits or knockdowns after throws. The freshman continues to show his toughness in the pocket, but there are only so many hits one can take over a season.

Clemson will remain ranked third and will be in the top four when the first College Football Playoff rankings are released on Tuesday. Florida State will fall but it might not be far after rallying but falling short.