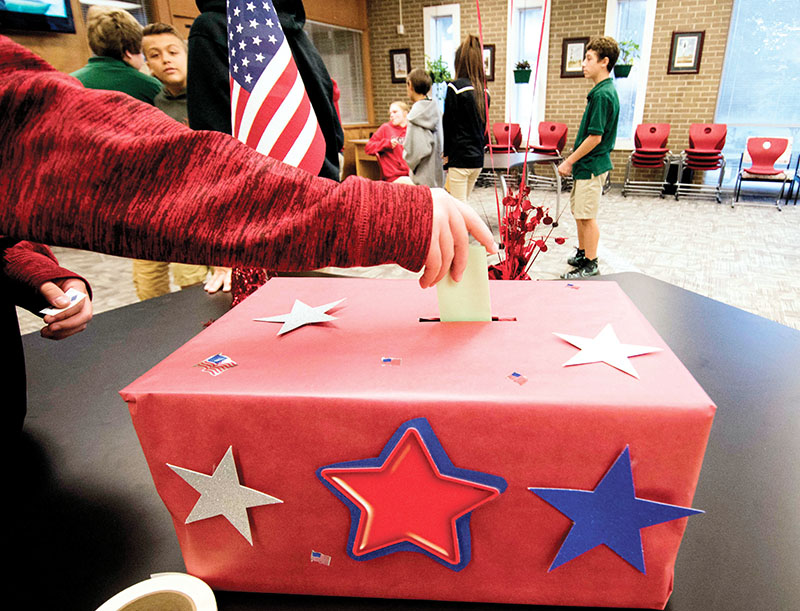 CHINA GROVE — The next President of the United States won by a landslide, according to China Grove Middle. The school took advantage of an early release day Friday to let its students cast their vote. Students paraded through the school media center all morning to fill out a ballot, drop it in a red-and-blue decorated box and pick up a sticker announcing, “I voted.”

This is the third time the school has held a mock presidential election, said Jane Woodward, media center coordinator. The event dovetails nicely with eighth-grade social studies curriculum, which includes lessons on the Electoral College.

Teri Mills, an eighth-grade social studies teacher at the school, said the students have been following the election in class. Mills and her class broke down where each candidate stood on particular issues, and studied states’ voting history for the last six elections to try and predict how they’ll vote in this one.

Fellow teacher Carl Muolo said that this election, in particular, has offered lots of opportunities to teach students about trustworthy sources and how to approach difficult topics.

“Everyone has an opinion, and it’s OK to have an opinion, but you have to discuss it,” he tells his students.

Throughout the semester, students have been surprised at how strongly others cling to their opinions. But they have some of their own, too.

“It’s very cut and dry. There are very few independents in the classroom,” Muolo said.

Class discussions have swayed some students — but Mills and Muolo said that many stick to their guns.

But all of them were excited to vote in Friday’s mock election.

“They really wanted to come do this today,” Muolo said.

Students school-wide pre-registered to vote, and then lined up at the school library to fill out their ballot. They were checked in by eighth-grade students, given a ballot, and sent to a table to fill it out.

The ballot contains all four candidates who are running for president in 2016.

“I’m really interested to see this time because it’s been so close,” Mills said.

“They can’t wait to find out,” she said.

By the end of the afternoon, Woodward and Mills tallied the results. According to China Grove Middle, the 45th President of the United States is Donald J. Trump. Trump won 61 percent of the school’s vote, while Hillary Clinton only bagged 26 percent. Gary Johnson received 8 percent of student votes and Jill Stein received 5 percent.

Many of the students will be eligible to vote in the 2020 presidential election.

“I think it will help us when we start voting,” student Riley McGowan said.