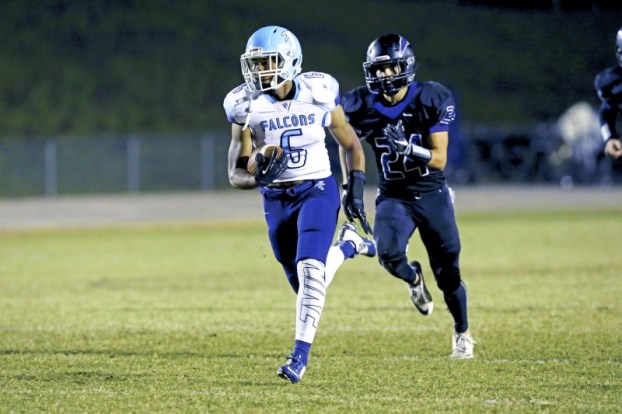 CONCORD —This was strictly a business trip for West Rowan.

A week after suffering that sour-tasting loss at Concord, the Falcons traveled to Cox Mill, rolled up their sleeves and had themselves a very good day at the office.

“Coming off that game last week, our guys regrouped and found a way to win on the road,” coach Joe Nixon said Friday night, moments after West got back on track with a swiftly played, 21-3 SPC victory. “Now they’ve put themselves in position to a big senior night next week.”

More importantly, West (8-2, 7-1) remained locked in a three-way tie for first place in the conference standings. A win against Hickory Ridge next Friday would clinch a share of the school’s first league title in five years.

“This is just the next step toward reaching our goal,” defensive end Tyler Wheeler explained. “We want to win the county, win the conference and win the state. But we’ve got to take it one goal at a time.”

Wheeler anchored a West defense that forced three turnovers, limited Cox Mill to 85 yards rushing — including just 22 in the second half — and defended the red zone like a mediaeval castle. The 6-foot-4 senior rejected two pass attempts by CM quarterback Eric Bone and recovered a first-half fumble that thwarted a Chargers’ drive at the 21-yard line.

“We put stuff together tonight,” said defensive back Deyquan Byrd. “We played how we play. We ‘out-physicaled’ them and out-executed them.”

Cox Mill (3-7, 3-5) never reached the gates to the end zone, but penetrated as deep as the West 15 in the final period. Down by three scores, Bone was stopped on fourth-and-4 by West’s Rodney Howell.

“We executed on that quarterback,” said defensive tackle Devin Turner. “He scrambled pretty good, but he wasn’t going to beat us. Tyler and I had a good talk before the game. We were determined to win and played with a chip on our shoulder.”

West scored the only points it needed to prevail early in the second quarter. Quarterback Payne Stolsworth completed a short pass across the middle to do-it-all receiver Kortez Weeks (5 receptions/101 yards), who turned the play into a 55-yard gain to the Cox Mill 10. One snap later running back Jovon Quarles took a handoff, broke to his left and angled his way into the end zone.

Cox Mill got on the scoreboard on its next possession when junior John Brosnahan kicked a 30-yard field, but West answered just as quickly. This time Quarles summoned his inner K.P. Parks by taking a handoff, picking up blocks from a couple of wide receivers and jetting 85 yards down the right sideline — providing a 14-3 West advantage at the half.

“Jovon has done it for us all year,” Nixon said after Quarles (17 rushes/147 yards) surpassed 100 yards rushing for the eighth consecutive game. “We just find ways to get him loose and hopefully he pops one here and there.”

West padded its lead with 3:13 remaining in the third quarter. Stolsworth spiraled a pass over the middle to Armoni Hogue, who juked a defender and raced 50 yards for his third touchdown of the fall. It was the 17th TD pass thrown by Stolsworth, who threw for 173 yards and boosted his county-leading average. The Falcons finished with 309 yards total offense, but it was the West defense — which yielded no touchdowns and held Cox Mill to 202 yards — that deserved top billing.

“We just knew what we had to do today,” Wheeler said afterward. “We came out here and handled our business.”

And erased some of the stain from last week’s debacle.

“We bounced back,” Byrd said. “We had to. Now we start preparing ourselves to make a big run down the road.”

NOTES: The touchdowns by Quarles were his 14th and 15th of the season. He’s rushed for 1,263 yards in 10 games. … West DBs Paris Hillie and Malcolm Ingram had interceptions, giving the Falcons 19. … Wheeler will make an official visit to St. Andrews University in Laurinburg today.