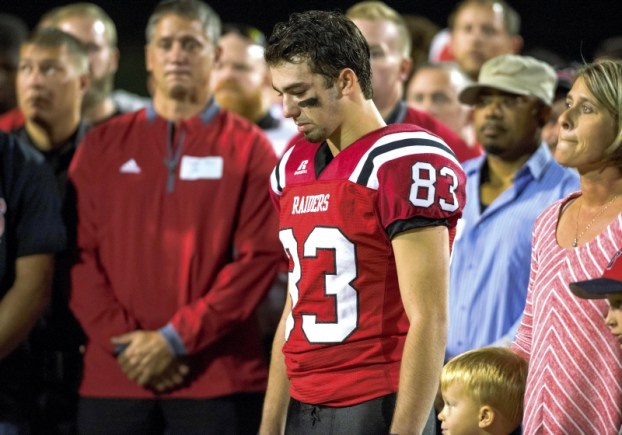 JON C. LAKEY / SALISBURY POST Austin Chrismon, grandson of Larry Deal traded his #5 jersey for his grandfather Larry Deal's number of 83. Family members and former athletes of South Rowan Coach Larry Deal gathered on the football field prior to the start of the game with JM Robinson on Friday night. Deal passed away unexpectedly earlier in the week. Friday, October 28, 2016, in Landis, N.C. JON C. LAKEY / SALISBURY POST Family members and former athletes of South Rowan Coach Larry Deal gathered on the football field prior to the start of the game. His wife, Diane, (center) was joined by her family on the field before the game. Her children Andrew Deal (left) and daughter Angie Chrismon (right) flank her. Friday, October 28, 2016, in Landis, N.C. LANDIS — In a moving display of respect and admiration for a great life and career, South Rowan High School honored former coach and athletic director Larry Deal, just before kickoff of last night’s game against Robinson.

Deal died suddenly on Monday at the age of 68. The funeral was held on Thursday for Deal, who coached and taught at South Rowan for over 30 years, retiring in 2005.

South principal Kelly Withers invited Deal’s family to be recognized at the 50-yard line and take part in the pre-game coin flip, tossed by his widow, Diane.

Deal’s daughter, Angie, is currently South’s athletic director. She was joined at midfield by her husband, Thad Chrismon, the Raiders’ baseball coach, and their sons, Austin and Nathan.

Austin Chrismon is a senior on the South football team and instead of his usual No. 5 jersey, wore No. 83, Deal’s number during his playing days, in honor of his grandfather.

Deal’s son, Andrew, who played football for his father at South in the 1990s, is now chief of the China Grove Police Department. He was on the field with his wife, Carrie, and their sons, Jackson, Landon and Mason.

“It’s a big South Rowan family and I wouldn’t trade it for the world,” Angie Chrismon said, after leaving the field. “We’ve had so much support over the past few days and it really showed how many people that he touched during his life.”

Withers invited all who had worked with or been coached by Deal to be a part of the ceremony. As a huge group of South Rowan black and red-clad men and women walked slowly together out to the 50-yard line, there wasn’t a dry eye in the house.

They walked past the extra large “LD” painted on the field.

At first, South’s current team stood at attention on the 20-yard line, but soon moved forward to surround the group at midfield. Robinson’s team stood respectfully in the corner of one end zone at Donnell Stadium.

The PA announcer then read a letter of appreciation from Gov. Pat McCrory.

“Mrs. Withers texted us and asked if we would be OK with the ceremony,” added Chrismon. “Of course, we said ‘absolutely.’ It was such a great tribute to his legacy. And when everybody came out and joined us, it was very touching.”

Chrismon was a track athlete and cheerleader at South Rowan before graduating. She then earned a degree at UNC-Chapel Hill and returned to South in 1998 and taught physical education alongside her father.

“Working with him was pretty cool and very special,” said Chrismon. “Everybody told me that I would follow in his footsteps and be AD one day, but I wasn’t really thinking that way — I just wanted to coach. But, here I am, trying to live up to his standards.”

Deal played football at South Rowan in the mid-1960s when the school’s nickname was still the Rebels. He earned All-Rowan County honors in 1964 and 1965. Deal was also a basketball and track athlete, earning nine varsity letters before graduating in 1966.

Several of Deal’s former players and assistant coaches gathered and swapped stories during the beginning of last night’s game, unfortunately, a rout by Robinson.

“Coach Deal was loved,” one said. “We’ve got memories and stories that could keep us here all night — and then some.”