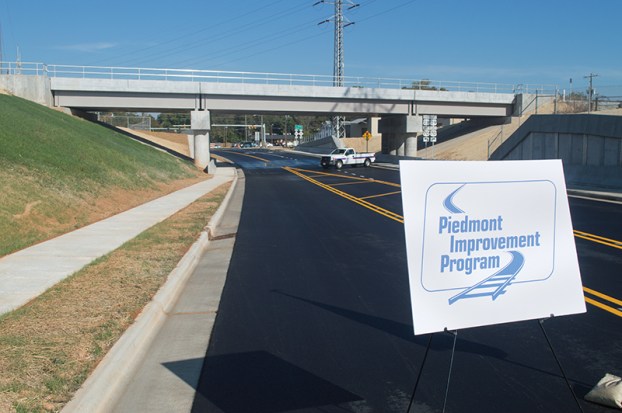 Josh Bergeron / Salisbury Post - A new part of Klumac Road will be open on Monday. A number of public officials on Friday held a ribbon cutting for the new Road, which involved an building a bridge, closing a railroad crossing, building an underpass and constructing an entirely new road. Josh Bergeron / Salisbury Post – A gaggle of public officials cut a ribbon at the border between Landis and China Grove for the opening of a new underpass on Kimball Road.

It’s unclear at what precise moment both roads will open. A spokesperson for NC DOT said both would open “Monday morning after rush hour.”

Local and state officials on Friday held ribbon-cutting ceremonies for both projects, which are part of a larger effort called the Piedmont Improvement Program. During both ribbon cutting ceremonies, NC DOT Deputy Secretary Keith Weatherly spoke about the benefits of the Piedmont Improvement Program — a $500-million project from Raleigh to Charlotte.

“The benefits of the PIP, as we call it, certainly make it safer and more reliable for train traffic to travel between those destinations,” Weatherly said. “It provides obvious advantageous for job growth and economic development along the corridor.”

All parts of the Piedmont Improvement Program will be complete in fall 2017, Weatherly said.

“For how long have we been looking, almost breathlessly, for Monday, when not only the bridge but the rail line and this new corridor through this part of Salisbury will open,” Alexander said. “I can’t overstate the importance of this to the city and to Rowan County.”

Speaking during the ribbon cutting, Salisbury Mayor Karen Alexander called on the city to name Klumac Road the city’s new “innovation corridor.” It would be a stretch of land with buildings connected to city-owned Fibrant, she said.

At roughly $4 million, the Kimball Road project is less expensive of the two, according to NC DOT Rail Division Director Paul Worley. Similar to the Klumac project, it includes a road that’s been separated from railroad tracks. However, the Klumac project also relocated an existing road.

In comments during a ribbon cutting, Jake Alexander emphasized the importance of limiting at-grade crossings. He also called the railroad one of Rowan County’s greatest assets. He said there have been 90 at-grade crossings — where the road and rail lines sit at the same height — eliminated between Raleigh and Charlotte as part of ongoing efforts.

Since 1992 in Rowan County, a total of 29 public and private at-grade crossings have been closed.

“They are a small price to pay for what will be a major driver of economic development and safety for travelers and the public,” Jake Alexander said about eliminating at-grade crossings.

During the ribbon cutting, Landis Mayor Pro Tem Dorland Abernathy infused a bit of history into the comments and recalled a time when the area where a road sits was known as “the dugout.”

“This is where the folks came to be when they didn’t want anyone to know what they were doing, like pouring up their liquor or selling their drugs or carrying on with other things they could have been involved in,” Abernathy said.

There was a cave near “the dugout,” Abernathy said. As a child, he envisioned what it would be like to dig a tunnel under the railroad tracks.

“Little did we realize what would happen 60 years later,” he said.