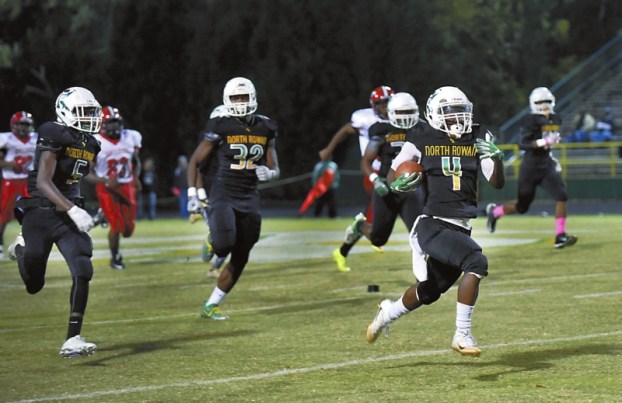 North's Jaden Perry 4 ran the opening kickoff back for a TD with De'Andre Gray 5 Zion DeBose 32 following up the field. photo by Wayne Hinshaw, for the Salisbury Post Wayne Hinshaw/for the Salisbury Post …
Pittsburgh Steelers’ Javon Hargrave, a North Rowan graduate, enjoyed the Cavaliers’ victory over Thomasville. The Steelers have a bye this weekend, so Hargrave had a chance for a visit home.

SPENCER — North Rowan’s stat sheet from Friday night’s Central Carolina Conference game wasn’t impressive, but that’s because most of the numbers were hidden.
North beat Thomasville, 33-14, with kickoff returns, punt returns, an interception return and a lot of defense.
“We’ve preached all year that it takes all three phases,” North coach Ben Hampton said. “This was the best performance that we’ve had on special teams, and guys saw tonight how hugely important special teams can be for us.”
North (8-2, 4-0 CCC) had all kinds of emotion going for it — Senior Night, the desire for payback against a Thomasville team that beat the Cavaliers in 2015, and an inspirational pregame talk from Pittsburgh Steelers defensive lineman Javon Hargrave, a former Cavalier.
Jaden Perry accepted Thomasville’s opening kickoff inside his 20, ripped into a seam and promptly raced to the house with Bulldogs in hot pursuit.
“We’d run two kickoffs back early in the season, and after that all we’ve seen were sky kicks and squib kicks,” Hampton said. “Maybe we finally got far enough along in the season that Thomasville hadn’t seen film of those games. And we’ve got some guys back there who can take it all the way.”
Ja’hare Taylor Thomas provided all of the excitement for the Bulldogs.
“He’s just a phenomenal athlete,” Hampton said. “On the basketball court or on the football field.”
Taylor Thomas’ interception and ungodly 85-yard return to the North 5 late in the first half set up a scoring run by QB Cirl Byrd that got the Bulldogs (4-5, 2-2) within 23-7 at halftime.
Taylor Thomas also scored on a blistering 36-yard sweep on the last play of the third quarter for the Bulldogs’ other score. It looked like he’d come out of the blocks running the 400.
“Thomaville is really talented and that 31 (Taylor Thomas) is really fast,” North linebacker Javin Goodine said. “We knew if anyone got of position it was going to be six points, and everyone saw that on that sweep. We had a cornerback get sucked inside, he got the edge, and he was gone.”
Perry’s TD got things rolling for the Cavaliers, and when the Bulldogs malfunctioned on a punt attempt late in the first quarter, North got the ball at the Thomasville 15. QB Corbin Smith found wideout Desmond Gray for a score from there, and Jacob Young’s PAT made it 14-0.
“Corbin made a lot of good reads,” Hampton said. “We had some drops and a couple of mistakes, but he had another really good game.”
When North’s dominating defense forced a second-quarter punt, Perry hauled it back to the Thomasville 43. A personal foul was tacked on from there, so North started at the Thomasville 28. Jaleel Webster quickly punched in the touchdown that made it 21-0.
More crunching defense by North’s defensive front of Zion DeBose, Steven Thurston, Darren Williams and Matthew Hoosier sent a Thomasville possession spinning in reverse, and North tacked on two more points for 23-0 when a high snap on a punt sailed through the end zone.
“Our front four plays at a high level,” Hampton said. “One of those guys gets going, and then the other three hop on.”
DeBose, who has recruiting visits lined up to Missouri, Western Michigan and Georgia Tech, had three sacks and a fistful of tackles for loss. He led the charge. The other three linemen were almost as good. Thurston smothered repeated runs between the tackles, and Hoosier and Williams registered bruising sacks.
Thomasville ran the ball 43 times, often with the talented Byrd keeping and looking to cut upfield, but the Cavaliers yielded just 96 rushing yards.
“We played fast, we played physical, and we played smart,” DeBose said. “We’ve got a lot of seniors (18) and everyone wanted to go out big on Senior Night. We brought a lot of energy.”
North would’ve taken a 23-0 lead to the break, but Taylor Thomas’ pick and twisting, darting runback led to Thomasville getting on the board.
Keith Carroll’s interception and fine runback put North at the Thomasville 10. The Bulldogs held firm, but Young’s field goal pushed North ahead 26-7.
Taylor Thomas’ dazzling sweep made it 26-14, but on the ensuing kickoff Webster came up with a big return to put the ball at the Thomasville 41. North used that field position to score its final TD, with Smith flipping a 7-yard TD pass to Alonzo Sirleaf with 8:24 remaining.
North’s offensive improvement is the biggest reason the Cavaliers are in position to win an outright conference title. They were good on defense last year, but the offense sputtered.
Perry had another touchdown on a punt return, but it was flagged for a block in the back. Still, this was a Senior Night that will be remembered for the way DeBose and Thurston dominated in the trenches and the way that North’s special teams performed.
“That touchdown on the kickoff was something,” Hampton said. “That was a quick punch. That was a shot to the gut.”

By David Shaw sports@salisburypost.com CONCORD —This was strictly a business trip for West Rowan. A week after suffering that sour-tasting... read more