Livingstone falls on the road at Fayetteville State 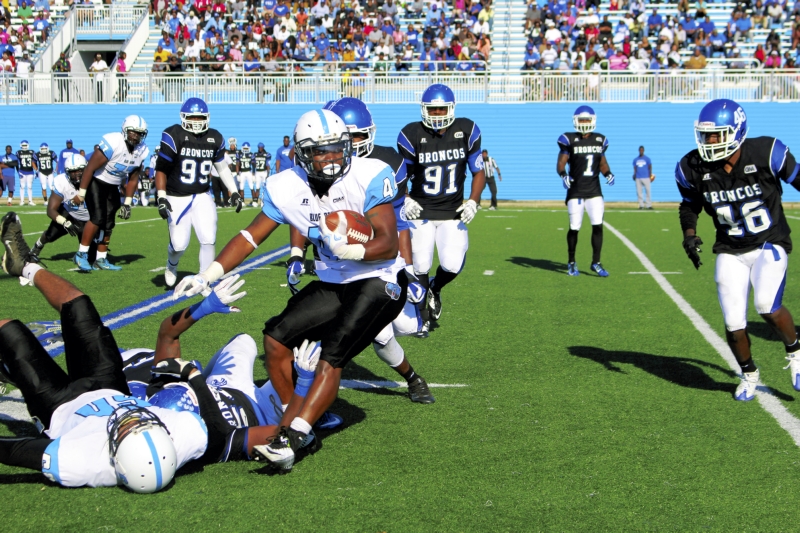 The Blue Bears spotted Fayetteville State a 22-0 halftime lead and fell to the Broncos in their homecoming game, 43-28.

The victory was FSU’s fourth straight after starting the season 0-5. The Broncos are now 4-2 in the CIAA. Livingstone falls to 2-7 overall and 1-5 in the conference.

Coach Daryl Williams’ Blue Bears mounted a comeback with 22 third-quarter points, making it a seven-point game (29-22) going into the last period. However, some crucial defensive and special teams’ penalties short-circuited the rally.

“We had a roughing the punter penalty that kind of changed the momentum,” said Williams. “And we had two pass interference penalties on the same drive that hurt our chances. But the guys were just going hard to make plays and I’m proud of the way the kids fought back. They could have laid down but they didn’t do that.

“We’re young and these are the growing pains,” continued Williams. “They’re learning that you can’t spot two-and-three touchdown leads to good teams and expect to be able to come all the way back.”

It was an 85-yard catch and run by Brooks that was the back-breaker for the Blue Bears. The scoring play came just 10 seconds into the fourth quarter, after Livingstone had cut the margin to 29-22.

Richardson ran for 130 yards, leading the Blue Bears’ 246-yard rushing total. Fullback Kendall Robinson followed with 71 yards, 68 of those coming on a 4th-and-1 play that went for a touchdown.

The Broncos kept Livingstone’s second-leading receiver, Spencer Ludin, from making a catch, but Ruben Lawhorn stepped up with five grabs for 62 yards. Ransom had five catches for 37 yards.

FSU also had a potent rushing attack as Stevie Green led the charge with 161 yards on 26 carries. Green had a 51-yard TD run early in the third period that made the score 29-8.

End Armond Cox led the Livingstone defense with 10 tackles, including two for losses. Linebacker Jarod Richardson and safety Danny Robinson had seven stops each. Cornerback Gregory Hines had the game’s only interception, returning it 21 yards.

Williams said that Livingstone was without freshman kicker-punter Tyler Keene, who rolled an ankle during a workout last Sunday.

The punting duties were handled by Danny Robinson and Thaddeus Bell — three attempts for a 31-yard average.

And without Keene, the Blue Bears were forced to go for two-point conversions after all four touchdowns. They were successful on two of those attempts.

NOTES: Reserve running back Justin Ruffin, of Salisbury, had six carries for 29 yards, including a long of 16 yards. He also scored one of the two-point conversions. … Livingstone concludes its season next Saturday in the Commemorative Classic against Johnson C. Smith in Charlotte (1:00). The classic celebrates the oldest rivalry in the nation among historically black colleges.