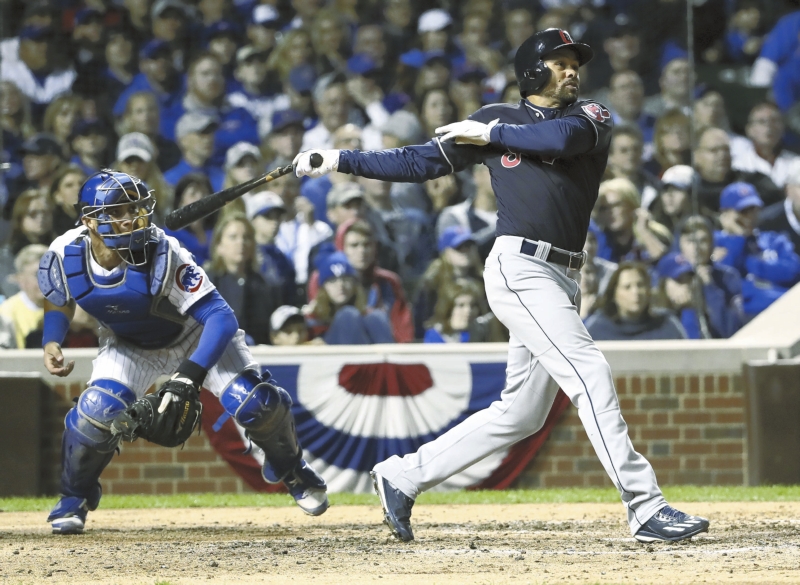 CHICAGO (AP) — Back with his original big league team, Coco Crisp has become a serial hitter for the Cleveland Indians this October.

Crisp came off the bench and singled home the only run in the seventh inning Friday night, giving the Indians a 1-0 victory over the Chicago Cubs and a 2-1 lead in the World Series.

With just two more wins, the Indians would take their first title since 1948.

“I’ve been getting text messages, and my phone’s been blowing up,” Crisp said. “I don’t think I’ve had more than three or four text messages at a time after a game prior to the playoffs, and now it’s like 30, 40. Everybody is kind of saying it, ‘Two wins away! Two more!’”

A son of boxer Loyce “Sugar” Crisp, Covelli Crisp was first given the nickname Coco by his younger sister Sheileah, who grew up to become a figure skater. When they were kids, she thought he resembled a cartoon character with big ears on the cover of a container of Cocoa Krispies cereal.

He listed it as his childhood nickname on a questionnaire when he was at Double-A in 2002, and a teammate found out about it and told the ballpark public address announcer. Crisp was flustered, got a hit and decided he had been over-focusing, so he stuck with Coco, he told the MANjr website five years ago.

“Now I’m stuck with the name that started off as a joke!” he told the website. “It’s still kind of a joke, but I’ve accepted it. It’s cool now.”

Cleveland reacquired him from Oakland for depth on Aug. 31, a waiver deal completed just in time for Crisp to be eligible for the postseason with the Indians.

The way things have turned out, he’s become a key cog in their pursuit of a championship.

Crisp’s two-run homer in the sixth inning opened a three-run lead against Boston, and the Indians held on for a 4-3 win that completed a Division Series sweep. His fourth-inning solo shot drove in Cleveland’s final run in Game 5 of the AL Championship Series against Toronto as the Indians won their first pennant since 1997.

“’Cleveland against the world.’ That’s kind of been the motto,” he said. “To be in this situation with the team that I broke in with is a very special feeling for me.”

Known for speed in his younger days, Crisp topped the AL with 49 steals in 2011. As his 37th birthday approaches Tuesday, the switch-hitter is far closer to the end of his career than the start.

Originally drafted by St. Louis in 1999, he was acquired by Cleveland three years later, made his debut with the Indians in 2002 and played for Cleveland through 2005. He moved on to Boston (2006-08), Kansas City (2009) and Oakland (2010-16) but bristled when the Athletics limited his playing time this year, a move that denied him the plate appearances necessary for his $13 million 2017 option to become guaranteed.

With the World Series tied 1-all and Game 3 scoreless, Crisp pinch hit for reliever Andrew Miller in the seventh inning with one out and runners at the corners. Cubs manager Joe Maddon decided to stay with Carl Edwards Jr. rather than bring in left-hander Mike Montgomery, a move that would have prompted Cleveland counterpart Terry Francona to replace Crisp with Brandon Guyer.

“We liked that matchup,” Maddon said. “You have to pick your poison right there. It just didn’t work out.”

“Went over the scouting report before I went up there, and I know he has some natural cut to his fastball,” Crisp said. “I was hoping to get the barrel to it, and I did. It cut in on me and I was fortunate enough that it was able to drop in front of the fielder.”

“He’s done that all year,” the manager said. “We needed something, anything, just to put a run across.”