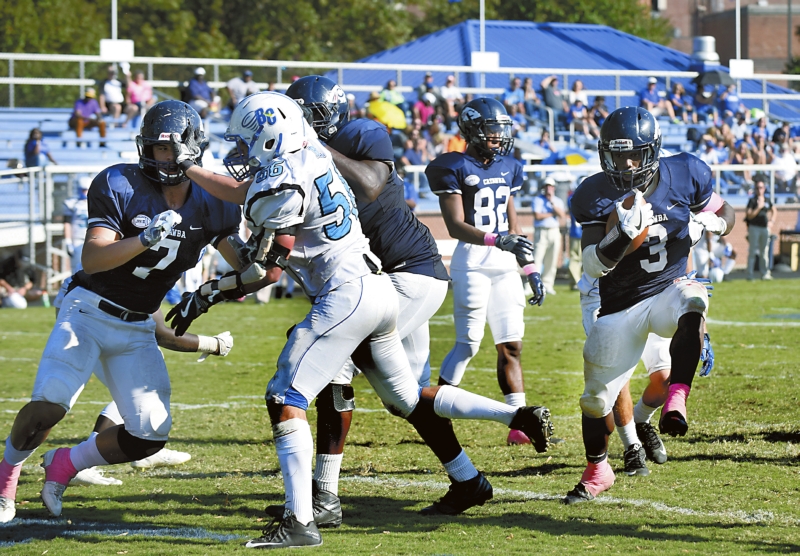 SALISBURY — Brevard is making the transition from Division II to Division III athletics, and it’s not a painless one.
The undermanned Tornados, in their final year in the South Atlantic Conference, had zero chance against Catawba on Saturday afternoon at Shuford Stadium. The Indians romped, 42-7, to add to the bright sunshine and homecoming revelry.
The Tornados (1-8, 0-5 SAC) have the roster numbers of a 2A high school team and they have three legitimate offensive linemen left on a depleted roster after injuries and transfers.
“We had to move a 185-pound linebacker to guard and we’ve got a 202-pound tight end at tackle,” Brevard coach Paul Hamilton explained. “Those kids have shown the hearts of lions and this team has displayed a lot of character in a challenging year. We’ve pressed on.”
To Catawba’s credit, it didn’t get sloppy. The Indians (4-5, 4-1 SAC) played methodical, mistake-free offense with former No. 3 QB Joseph Dress handing off to David Burgess and Eamon Smart and the offensive line scattering bodies and plowing Grand Canyon-sized holes.
“The game plan was to run the ball,” Catawba coach Curtis Walker said. “I was proud of how we executed that simple game plan, and Dress was able to complete short passes outside (mostly to Keyon West) whenever they clogged the middle. We blocked well, we tackled well, we ran well. We got back to the basic fundamentals.”
Defensively, it was like watching a heavyweight batter a welterweight around a boxing ring. Catawba overwhelmed the visitors.
Brevard runs the ball 95 percent of the time with an option offense, so Catawba employed outside linebackers Jamal Lackey and Kyle Kitchens as stand-up defensive ends in a five-man front. Brevard lacked the speed to turn the corner against Lackey and Kitchens, so everything was forced back into a bumper-to-bumper traffic jam in the middle.
“I know Keith Henry (Catawba’s defensive coordinator) like family, and he’s very good,” Hamilton said. “I knew he’d take the outside away from us.”
Linebacker Michael Peppers (14 tackles) and lineman C.J. Barksdale (9 tackles) were waiting on the inside like angry pit bulls, and they bottled up the Tornados.
“We read our keys and maintained gap discipline,” Peppers said. “We played well and got a win that we needed. We got a little of our swagger back.”
Linebacker Trey Evans picked off one of Brevard’s rare passes. A 15-yard run was the longest play all day for the Tornados.
Burgess had 156 rushing yards for the Indians, who pounded for 387 as a team. Burgess had 100 yards after the first quarter.
“The blocking was amazing and phenomenal,” Burgess said. “The offensive line could do no wrong, and execution was just excellent. We scored on that first drive, and we kept it rolling. We’ve just to got maintain what we did today in our last two games.”
Smart scored from the 1 to cap a 65-yard march shortly after the national anthem was played.
After Catawba’s defense forced a three-and-out, the Indians cruised 70 yards. Dress got the TD on a sprint from the 8-yard line to make it 14-0.
Dress has been elevated to a starting role after ankle injuries to Mike Sheehan and Reid Carlton. He managed the game well and was 7-for-11 passing for 38 yards.
“I’m a utility guy, but I do kind of like being that guy,” Dress said with a laugh. “The coaching staff has done a good job of putting in things I can work with, and hopefully we’ll keep adding more things.”
On Brevard’s second possession, Lackey stuffed a running play and Peppers blew up two. Brevard punted again, and Catawba scored again. This time it was a 1-yard flip from Dress to tight end Andy Hunt.
And so it went. Catawba made it 28-0 before halftime when Evans’ interception and 46-yard return to the Brevard 9-yard line set up a touchdown run by Dantareus James.
Early in the fourth quarter, the Indians tacked on a TD run by Burgess for a 35-0 lead.
Then Greg Waslo, a true freshman from Hickory Ridge High, made his Catawba debut and directed the scoring drive that made it 42-0. Kenyatta Greene broke a 33-yard run for the touchdown.
“You hate to play a kid (Waslo) for the first time with just three games left in the season, but Waslo really wanted to get in there,” Walker said. “And we showed the great depth we have at running back with James and Greene. They’re going to be good players.”
Down 42-0, Brevard scored with 1:23 left in the game when Jarkevius Hopkins scooted around the right side for a 3-yard score with 1:23 remaining.
Catawba fans wanted a shutout on homecoming, but no one seemed to mind that Brevard got on the board. The Tornados’ courage in fighting through this season has been admirable.
“We fought, but I commend Catawba on how well they played today,” Hamilton said. “That’s a very good football team, much better than their record. They’ve just played a difficult schedule. ”
Brevard won’t immediately be eligible to compete for the league championship, but it will become a part of the USA South Conference next fall. That league includes schools such as Methodist, Averett and Greensboro.
“The playing field will be leveled for us,” Hamilton said. “And I believe we’ll do well.”